MLB Network prides itself on delivering the most comprehensive coverage of baseball anywhere. Since its launch in 2009, the popularity of MLB Network has soared, spurring 20% year-over-year growth in production demand. In 2014, the network adopted all-new editing and post-production technologies to accommodate expansion, boost efficiency, and further raise the bar on quality.

MLB Network prides itself on delivering the most comprehensive coverage of baseball anywhere. Since its launch in 2009, the popularity of MLB Network has soared, spurring 20% year-over-year growth in production demand. In 2014, the network adopted all-new editing and post-production technologies to accommodate expansion, boost efficiency, and further raise the bar on quality.

Adobe: What content does MLB Network produce?
Butler: We basically have two seasons, the regular season and off-season. In the regular season we have the job of recording all of the games and creating a highlights factory workflow that produces our content for shows like MLB Tonight, The Rundown, Intentional Talk, MLB Now, and Quick Pitch, which focus on the day’s activities and give a snapshot of what’s going on around the league.

In the off-season we are focused on headlines around free agency and longer-form programming. We have daily news shows such as Hot Stove, as well as High Heat with Christopher Russo and MLB Tonight, and we produce several countdown shows, individual player profiles, and other programming that goes behind the daily game and into more of the storytelling about baseball.

Adobe: Tell us about your new environment.
Butler: Our production needs and volume are growing so rapidly that we really wanted to build a foundation for the future. We are rolling out 50 high-performance Cisco UCS C-240 computers as editing stations—all equipped with NVIDIA cards for GPU acceleration. We are now at 38 HD editing stations and are expanding to 50 HD edit workstations, running the Adobe Creative Cloud suite of products.  We also will deploy 250 concurrent licenses for Adobe Premiere for desktop editing. We use a wide range of applications, including Premiere Pro, After Effects, Audition, Media Encoder, Prelude, Photoshop, and SpeedGrade. 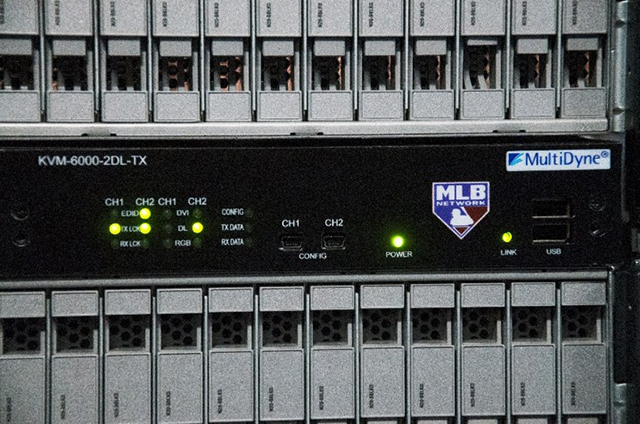 The C-240 Workstations are Connected via Multi-Dyne KVM over a Single Dark Fiber as Edit Workstations. Running Adobe Creative Cloud for Content Editing.

Adobe: What were you using for editing prior to Adobe Premiere Pro CC?
Butler: We had a combination of Final Cut Pro 7 and Grass Valley Aurora. Both had become outdated, especially in terms of processing power. We switched to Premiere Pro due to its integration with After Effects, which we use extensively for compositing. We were impressed with Adobe’s ongoing development and commitment to the market. With Adobe’s support we were able to create a custom panel accessible from within Premiere Pro that interfaces seamlessly with our logging and asset management system, DIAMOND.

Adobe: Why is the integration with DIAMOND important?
Butler: It’s been a tremendous differentiator. Our editors don’t need to jump between Adobe and the DIAMOND system for locating and importing assets. This is crucial because our library houses over 500,000 hours of content—25 petabytes—and we expect that to grow by up to 120,000 hours in the next year. Editors can identify where content resides to re-link low-res materials with their high-res counterparts for publishing without ever having to leave Premiere Pro. 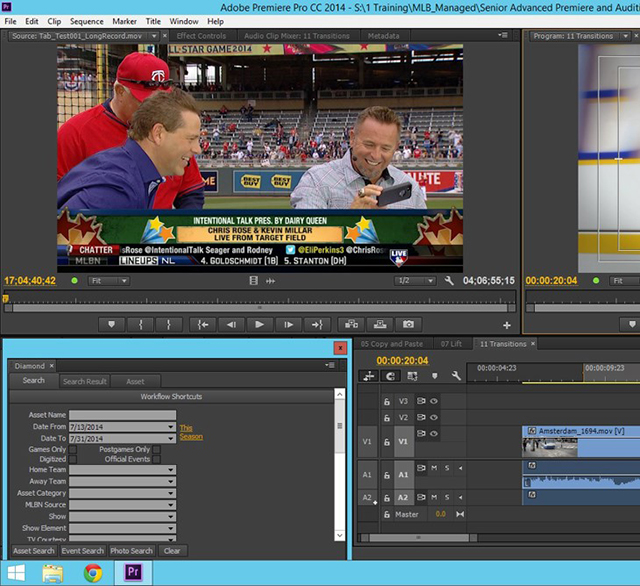 Adobe: That’s a huge amount of content. How does MLB Network amass that much?
Butler: We ingest as many as seven recordings for each game played. We record both the home and away game feeds, both with and without graphics. We also have 16 audio tracks for each recording, which includes home and away TV and radio announcer feeds, foreign languages, and so on. MLB Network also has two cameras in each ballpark as part of the Ballpark Cam system, which are controlled by operators at our headquarters.  We have a lot of other material for our long-form programming. This can be anything from videos and photos from iPads and iPhones to archival footage.

Adobe: How are you using other applications in Creative Cloud?
Hayes: In the offseason, we focus on storytelling pieces that contain more effects and compositing, so we rely heavily on Dynamic Link between After Effects and Premiere Pro. During the season, telecasts are more news-oriented and require fewer effects. For both, we are using Audition for editing audio, SpeedGrade CC for color grading, and we are in pilot with Prelude to see how it can help us with video logging. Adobe Media Encoder is vital to our processes, especially for preparation and delivery of content from Premiere Pro.

Adobe: Have there been other benefits to adopting Adobe Creative Cloud?
Hayes: One of the main advantages is that we have been able to extend our creative services and graphics creation capabilities into the post-production environment. The use of common tools across both areas of creativity has helped us tremendously in maintaining consistency and quality among departments. We also enjoy more seamless, productive workflows.

Adobe: This is obviously a major upgrade to your environment that involves customization. What has it been like working with Adobe?
Schiro: Adobe has been genuinely outstanding. We’ve worked closely to overcome some issues with closed captioning. Adobe also helped us test various video cards on the Cisco UCS platform, and that’s been incredibly useful for us. Adobe and Adobe partners such as NVIDIA have close working relationships that ultimately benefit us.

Adobe: What do you see on the horizon?
Butler: Working with Adobe, we’ve already been able to go further, faster, with less effort to develop a solution that meets our complex editing and post-production needs. We plan to refresh and advance our environment each year. We’re currently testing Adobe Anywhere for our development environment, looking at not only tying into our production environments for MLB Network Showcase game telecasts between MLB Network and the mobile units, but also how it ties together After Effects and Premiere Pro and projects as a whole.

The Adobe products are expansive and rich. Our goal is to more fully use the features and capabilities of all programs to achieve our goal of excellence in baseball programming. We’re excited about the future and the possibilities it holds for even better, more exciting telecasts for our fans.