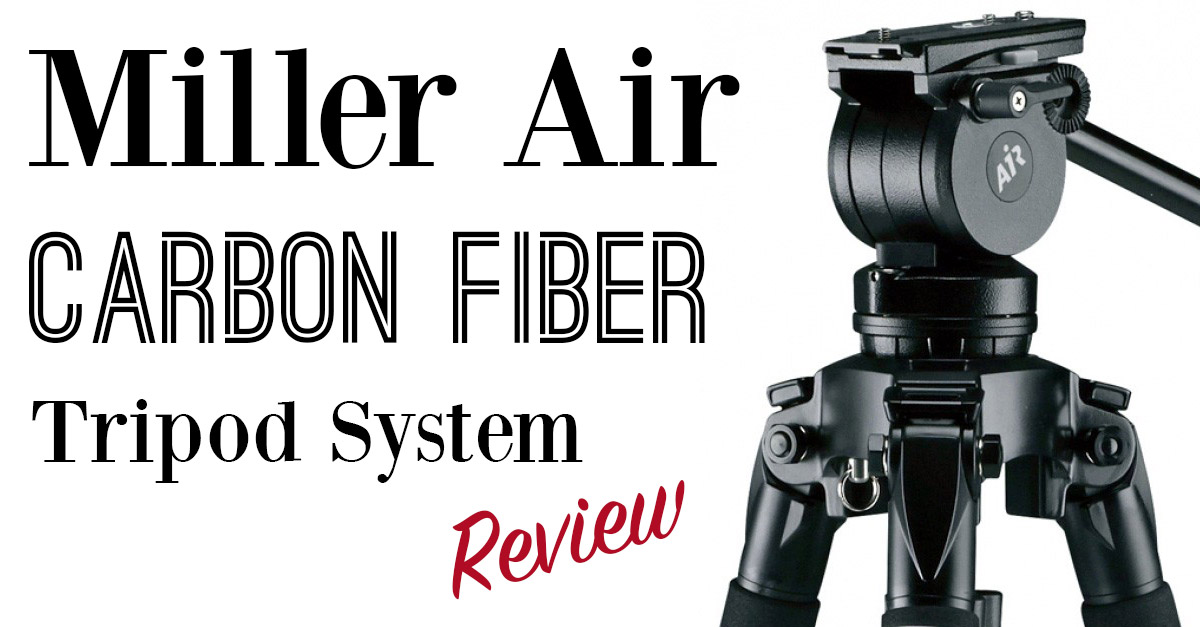 The Air Tripod System Range is comprised of the Air Alloy and Air Carbon Fiber and both feature the same Air Fluid Head.  The Air Tripod System is billed as a lightweight and affordable option for DSLR users, though a Canon C100 MKII or similar would be quite at home as well with a maximum payload of 11lbs.  In the extensive Miller lineup, the Air Series sits beneath the Compass Series and the price differential is quite considerable.  The Air Alloy retails for around $950 with the Air Carbon Fiber coming in around the very reasonable $1200 mark.  The Compass Series can handle larger payloads (up to 22lbs) but the price for the base model is around $1900, so you can see why Miller was keen to introduce something to the lineup that was priced more aggressively for the DSLR crowd.  Given that the Air Fluid Head is indeed a true fluid head, you can’t really fault the price of the system at all.

When Miller sent me this review unit to test out, I actually didn’t look up the details of it until after I’d unpacked it and played with it for some time.  It was an interesting blind test because I wasn’t sure about the price of the system at all.  Unboxing the unit, I was at first thrown off a bit by the cheap case it came in.  I wouldn’t trust the zipper on that thing for very long at all.  Then I got to the tripod inside the case though and after a few minutes of playing with the sturdy legs and head, I was convinced this was a much more expensive system.  Build quality on the carbon legs was excellent, and the twist lock system was as good as any other tripod I’d used, including my own one from Really Right Stuff who are known for their quality.  The legs feel quite chunky for a system that’s only rated to 11lbs, so it might not be my first choice if I was climbing a mountain, but overall, first impressions were very good.  When I finally got round to looking the current price up on a couple of online stores, I was very impressed.  One thing that I fell in love with right away was the excellent air-cell padded shoulder strap.  I’m going to be looking to see if I can fit one of those to my own set of legs!  Extremely comfortable. 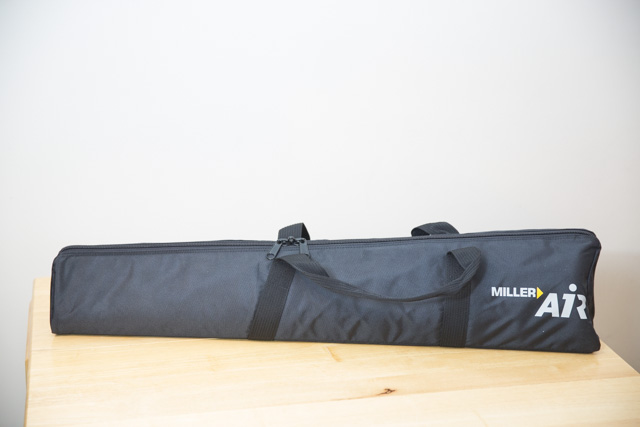 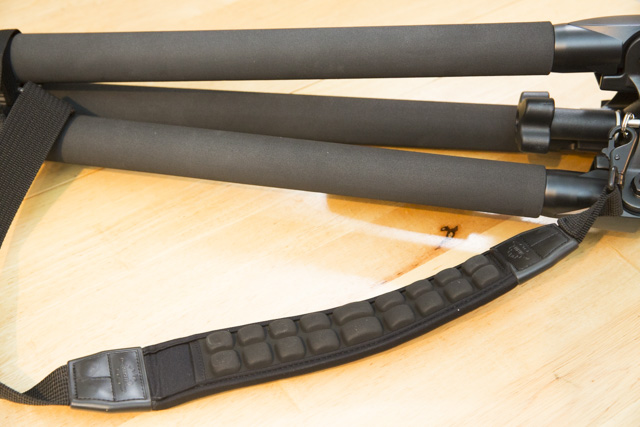 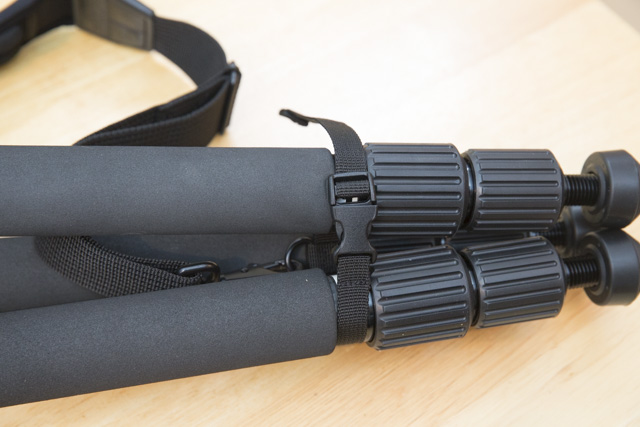 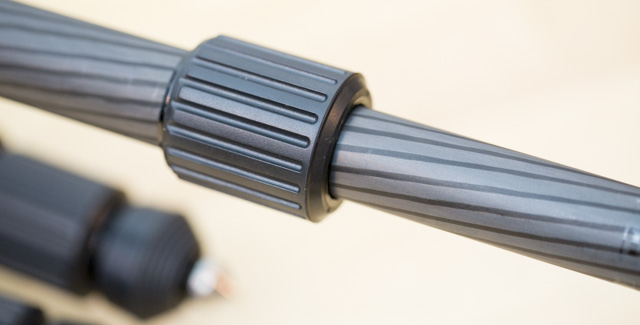 The Air System tripods rubber feet which screw upwards to reveal built-in spikes.  Whilst it is nice to not have to carry separate spikes around, I did have a couple of issues with this design.  Firstly, as you can see from the photo below, the design creates a perfect pocket on the bottom of each leg which fills with dirt or snow if you ever happen to be shooting in those situations.  Invariably this little collection of outside substances stays in place until you get into your car, or return to your office, at which point it deposits itself where you least want it to.  Having a threaded foot right on the bottom of the legs also meant that the thread itself was instantly contaminated with dirt on its first outing.  Every subsequent change from rubber foot, to metal spike, was accompanied by that horrible sound of grinding grit in metal threads. 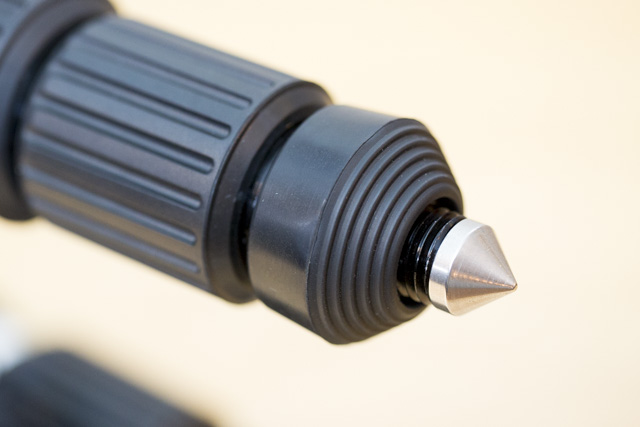 The thread begins almost immediately, meaning it gets contaminated with dirt in the first outing 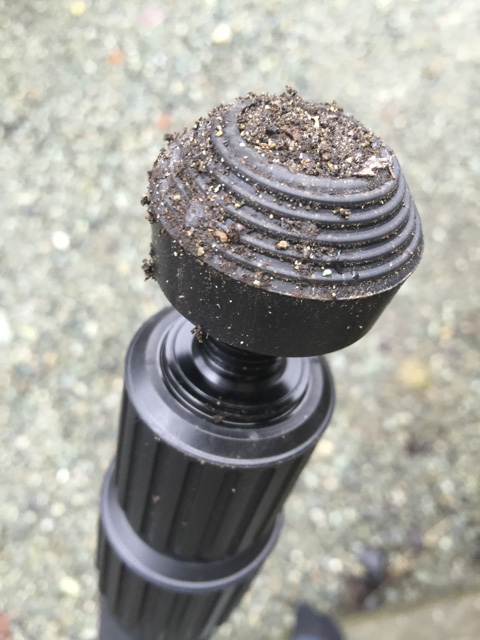 Dirt can get easily trapped in the base of the foot

The rest of the legs were trouble free though and 2-stage design gives a generous maximum height.  With no spreader, the design is flexible and extremely low angles are possible, limited only by the protrusion of the levelling head handle.  Although these kinds of leg designs are a little less stable than a “traditional” video tripod, I prefer them for their ease of setup on uneven ground.

The Air Fluid Head sits on a 75mm ball that does the trick without much to write home about.  The head itself has a 2-stage counterbalance and along with a 60mm sliding distance on the quick release plate, I was able to easily balance my Canon 7D Mark II with a wide range of Canon EF lenses.  Certainly this can be tricky with larger heads that have a much higher minimum balance weight but this was a breeze.  One real head-scratcher for me though was the positioning and design of the quick release plate lock.  On the right-hand side of the plate is a locking lever that protrudes above the top level of the plate itself.  The result is, as you can see, that it can come into contact with the underside of the camera in certain positions.  Given that the package is designed for DSLRs, which are often used low down and directly on tripod plates, this seems like a poor choice.  To make matters worse, the lever doesn’t feature any kind of spring-loaded repositioning so you can’t change it’s position at all.  You end up having to slide the camera forward or aft to let it clear the lever while you tighten it, then push it back into place and hope the last few degrees of tightening can happen unobstructed. It’s also possible for the same lever to foul against the panning bar clamp as well.  Prolonged use of this setup would definitely have required me to rig up some sort of quick release system on top of the tripod’s own plate system.  It’s not a huge deal since I usually mount Arca-Swiss compatible QR clamps on heads for my DSLRs anyway, but it does seem like an unnecessary oversight in the design that took me all over two minutes to discover. 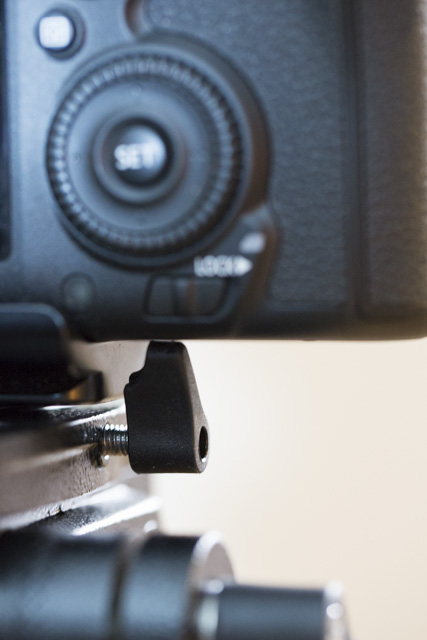 Locking lever contacting the camera base

Once the camera is mounted to the head though, it’s a joy to use.  I think many DSLR users are used to using cheaper heads like the Bridge design ones from Manfrotto, myself included.  The Miller Air Fluid Head was much smoother though when I compared it alongside my Manfrotto 500 series head.  The panning lock feels a bit flimsy, and is oddly positioned on the front where you can’t see it, but it does the trick and the overall feel of the metal head is solid.  Miller informs me that all of their heads feature the panning lock on the front so that the operator can use it without taking their eye off the subject.  I see some logic in that for larger cameras where the operator has their eye against an EVF/OVF, but for smaller DSLR setups I think it’s more usual to be using the screen on the back of the camera, or a small HDMI monitor, in which case, to me, the lock felt a bit awkward to be placed on the front.  Despite being aimed at the lower end of the market though, it feels like a head that’s going to last you a very long time and Miller’s expertise in fluid head manufacturing certainly shines through the couple of small, odd usability issues.

The Air head is only available as a package with either the Air Alloy legs or Air Carbon legs and I like the dependable simplicity of the setup as a whole.  Buying a head/tripod package saves you from decision fatigue caused by endless comparisons of this tripod Vs. that head, and it also saves you a bit of money as well.  Add a different quick release clamp onto the top plate and you’ve got a killer DSLR setup. 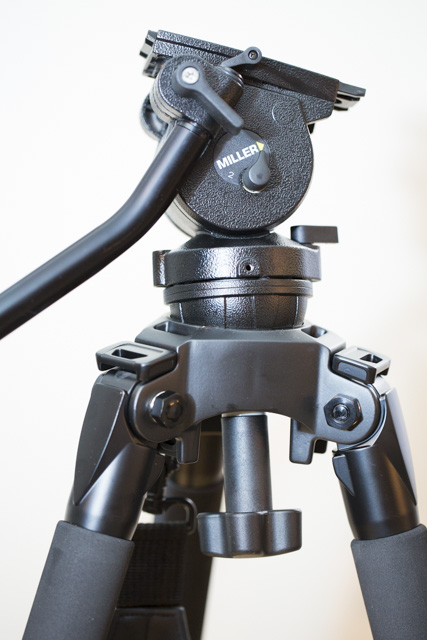 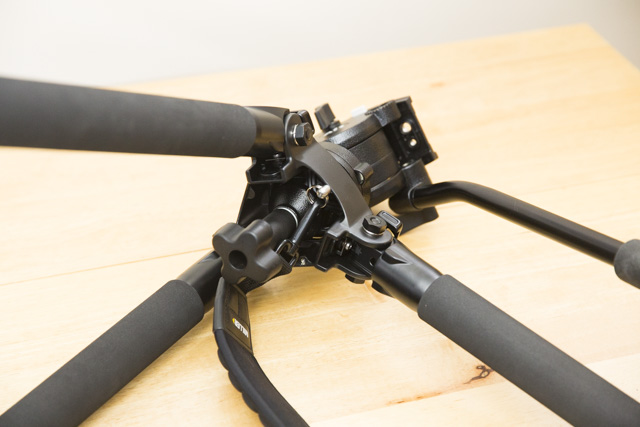 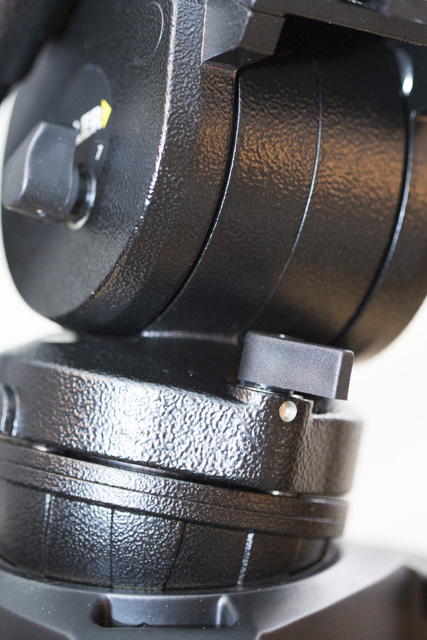 Panning lock on the front 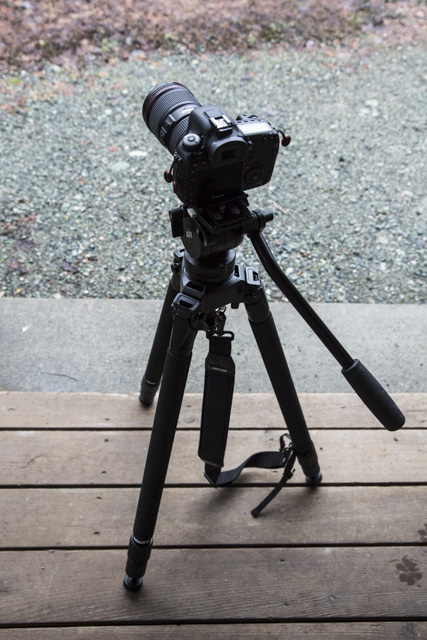 When I sit down to write a conclusion, the simple two-part question I always ask myself is whether I would buy it myself, and most importantly, would I be disappointed if I’d done so?  I enjoyed using the Air Tripod and despite being let down by the various oddities of the head’s top design, thankfully the price point and the head’s smooth motion more than make up for that.  If I’d forked over $1200 of my own money for this, I’d be very happy with it after I’d made a few modifications to how I mount my camera to the plate.  It’s not the lightest set of carbon legs on the market, my own Really Right Stuff legs are considerably lighter and rated for much more weight, but it’s really the price of the system as a whole that makes this stand out to me.  Sachtler’s Ace L head/tripod combination is roughly similar in price and specification, but whilst the Sachtler legs appear to be lighter, the Miller Air Fluid Head feels much better than the Sachtler Ace L in my opinion.  The simpler design of the Miller head also gives it a considerably more solid feel.  In conclusion, it’s not perfect, but the issues are minor enough that they are easily overshadowed by the excellent value for money.  A solidly professional feel at a price that fits the budget of people building out a kit based around a DSLR.