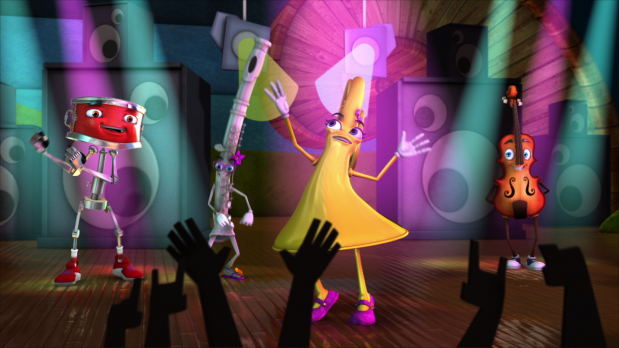 “Melody Street” takes place in a magical world where animated musical instruments talk, sing and dance with live-action host Ethan Bortnick, a nine-year-old philanthropist and piano prodigy whose musical career began at age three. Bortnick’s ability to play any song by ear continues to garner him worldwide recognition, which he uses to help raise money for worthwhile charities such as the recent recording “We are the World 25 for Haiti.” Bortnick continues to captivate audiences around the world, appearing on popular television shows such as “Oprah,” “The Tonight Show,” and many others. To learn more about Ethan Bortnick, visit www.ethanbortnick.com

“Our mixed-media approach is a breakthrough in the broadcast market targeting three-to-seven year old kids,” says Director Guy Frenkel, one of three partners with Composers Gilad Benamram and Gil Feldman. “Using MachStudio Pro, we can easily integrate lighting, occlusion, and CG elements with the live-action video in real time, giving the show a look normally seen only in feature films. MachStudio Pro is essential to our efforts.”

“MachStudio Pro is similar to the revolutionary impact of Final Cut Pro for editing or Pro Tools for recording,” says “Melody Street” partner Gilad Benamram. “Now smaller studios and individuals can produce 3D animation at home that looks like something produced in a big studio.”

Instead of revamping its entire workflow, the Melody Street team incorporated MachStudio Pro into its existing Autodesk Maya and Apple Final Cut Pro pipeline, a solution that allows the artists to easily make adjustments on the fly as a project moves forward. “Our animation is quite complicated and it takes between half an hour and an hour per frame with traditional rendering,” explains Frenkel. “But when using MachStudio Pro, the rendering takes anywhere from a few seconds up to a minute for the most complicated shots. It would be crazy to do it any other way.”

The fluid workflow of MachStudio Pro also allows the “Melody Street” team to envision composites ahead of time, even compositing directly in MachStudio Pro as needed. For example, a shadow that is cast from the video channel using an alpha channel can easily be combined in a 3D environment using MachStudio Pro.

To view a “Melody Street” broadcast and other innovative interactive educational activities with the characters from “Melody Street,” please visit www.melodystreet.com.