Winner of the 2011 Silver Edge Award

MAXON is pleased to announce CINEMA 4D R13, its cornerstone 3D motion graphics, visual effects, painting, and rendering software application has been named a recipient of the prestigious Computer Graphics World Magazine SIGGRAPH 2011 Silver Edge Award. SIGGRAPH 2011 is the world’s premier conference on computer graphics and interactive techniques, which took place in Vancouver last August. MAXON was among the more than 150 industry organizations exhibiting at the show. 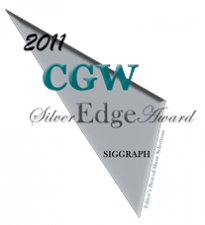 Since 1977, Computer Graphics World magazine has provided in-depth editorial coverage of the modeling, design, animation and multimedia technologies and their uses for engineers, designers, researchers and animators within the primary fields of science, art and entertainment. According to CGW Editor, Karen Moltenbrey, “…the annual awards recognize impressive technologies at the show, so selecting the CGW Silver Edge Award winners was certainly challenging. Yet, there were some offerings, including CINEMA 4D Release 13, that stood out from the rest as having the potential of greatly impacting our industry now and in the future.”

CINEMA 4D R13, the next generation of the professional 3D software package, was on public display at SIGGRAPH, and started shipping last month. Revered by digital artists worldwide for its superior ability to quickly and easily create stunning high-end 3D images and animations for film, broadcast, architecture, games, multimedia, design and engineering, Moltenbrey noted that the new and character tools that MAXON developed for R13, alongside its integrated stereo workflow capabilities, as well as the physically accurate rendering for generating photorealistic imagery, were among the considerations in conferring the software with this year’s Silver Edge Award.

“MAXON remains committed to constant innovation and aims to bring the most advanced, user-friendly tools to 3D artists around the world,” said Paul Babb, president and CEO at MAXON US. “Since its release last month, CINEMA 4D R 13 has garnered enthusiastic industry response. We are thrilled that CGW – the editorial authority and one of the “must-read” publications catering to animation and computer graphics professionals – recognized CINEMA 4D as an industry-shaping design tool and honored us with the Silver Edge Award.”

MAXON CINEMA 4D is a professional 3D software package offering everything needed to create high-end 3D images and animations for film, broadcast, architecture, games, multimedia, design and engineering. Building upon more than two-decades of excellence, CINEMA 4D offers spectacular image quality and an intuitive, easy-to-use interface that puts professional results within reach of artists at all levels of CGI experience. CINEMA 4D delivers speed and productivity by taking advantage of the latest advances in processor technology, and offers configurations tailored to the distinct needs of specialized 3D markets.

Headquartered in Friedrichsdorf, Germany, MAXON Computer is a developer of professional 3D modeling, painting, animation and rendering solutions. Its award-winning CINEMA 4D and BodyPaint 3D software products have been used extensively to help create everything from stunning visual effects in top feature films, TV shows and commercials, cutting-edge game cinematics for AAA games, as well for medical illustration, architectural and industrial design applications. MAXON has offices in Germany, USA, United Kingdom, France, Japan and Singapore. MAXON products are available directly from the web site and its worldwide distribution channel. Specially priced learning editions of the company’s software solutions are also made available to educational institutions. To commemorate its 25 years impacting professional motion graphics designers, visual effects artists, architects and others in the creative community, MAXON will be hosting celebrations around the world throughout 2011. For additional information on MAXON visit www.maxon.net.

When CBS’s 60minutes added 360 video capture for one of their stories I knew we were solidly on the...