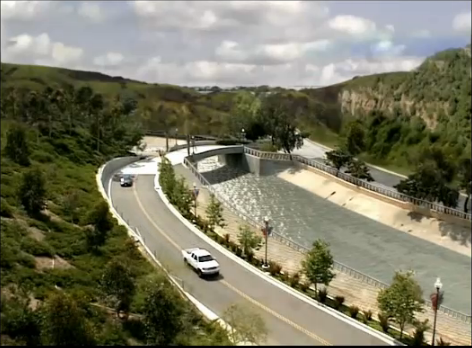 In the days of early motion picture making the art of “matte painting” was a process of actually painting with oils on a plate glass that was then shot in position in front of a scene on location or in the studio where the film would be exposed by the combined images through the camera’s lens, creating an illusion that the actors int eh scene were in a totally different location or that the surrounding set or location was enhanced greatly. This process has evolved over the years and with modern day digital compositing and illustration/animation techniques, there’s little that can’t be created or replicated with computer graphics or manipulation. In this video tutorial, I show you how I used simple photographic components, combined with masked elements extracted from the original footage and re-timed – all using After Effects & Photoshop, along with some CG elements from a simple plug-in call Psunami from Red Giant.

Creating the Moving Matte Painting in After Effects & Photoshop

I show you the before/after of the project and how I layered in all of the elements and put everything into motion. In a scene where there’s a lot of natural elements like trees blowing in the wind, you can extract portions of your original footage, re-time it so it doesn’t repeat into other areas of your scene and use it to help extend or rebuild an entirely new scene. You can paint new elements an use photographs in motion to create new components, or as in this case, isolate moving items with moving masks to put them back into the scene from another point in time from the original running footage time. I also added moving water into the channel using a masked solid layer in After Effects with Red Giant’s Psunami plug-in.

This tutorial is a Free video example from my Advanced Compositing, Tracking, and Roto Techniques with After Effects video training series with video2brain.

Click on the image below to view the video tutorial/overview of the project: