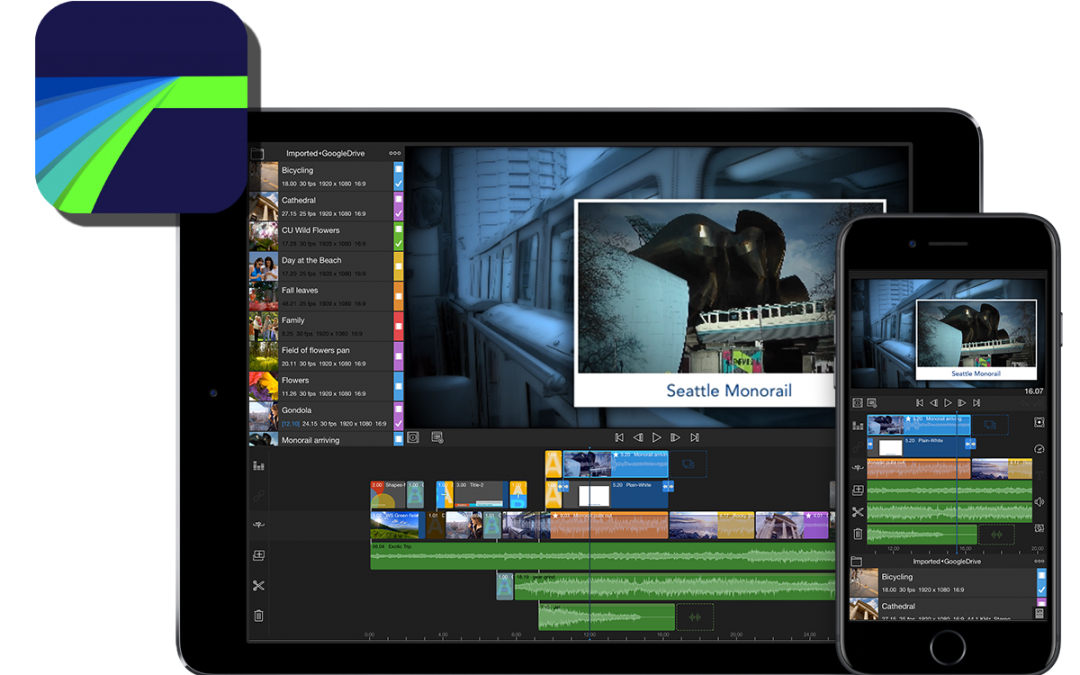 I have been covering this iOS video editing tool since way back when it was born as Avid Studio for iPad in 2012. Then it became Pinnacle Studio and most recently it’s called LumaFusion. This audio/video editor has come a long way since the time when it didn’t yet support 48 kHz or non-integer framerates on export. Version 1.4 of LumaFusion for iPad/iPhone/iPod Touch now offers many new pro audio functions and raw video support for when performing color grading from compatible footage. Ahead is a full list of new features, plus the developer’s answers to my questions regarding several details. You’ll also see two videos: a review from 9to5Mac and another showing new features in version 1.4. Finally, I’ll update the proper framerate workflow for iOS video production.

LumaFusion review from 9to5Mac (made before the 1.4 update)

Be sure to see my updated iOS framerate tutorial ahead in this article, since despite a wonderful review, 9to5Mac avoided discussing non-integer framerates (i.e. 23.976, 29.97 and 59.94), which are still critical in today’s NTSC and ex-NTSC regions.

New features from the press release

Video from the developer to show new 1.4 features

LumaFusion 1.4 offers its interface in Castilian (aka “Spanish”), English, Dutch, French, German, Italian, Japanese, Russian, Simplified Chinese (presumably Mandarin). I have not yet evaluated the quality of the Castilian translation of LumaFusion 1.4.

My questions and answers from the developer

Here are my questions and the responses:

Q1: Does LumaFusion 1.4 continue to support and default to 48 kHz audio? (See my article All audio production & distribution should go 48 kHz. Learn why.)

A1: Yes, 1.4 continues to support 48 KHz audio.  We actually default to 44.1KHz on export, but if you change it to 48KHz it will default to that for any subsequent exports.

Q2: Does LumaFusion 1.4 continue to support sharing to non-integer framerates like 23.976, 29.97 and 59.94? (See my articles Video framerates and the Tower of Babel: a translation guide and Why I pardon rounding of shutter speeds in camera menus, but not framerates!)

Q3: Thank you for supporting stereo configuration for clips (fill from left, fill from right) for dual microphone recordings. It is not clear exactly whether this smoothly covers a situation where there is one mic for an interviewer and another for an interviewee, and the desire is to have both the left and right be set to center. In your YouTube video, it says: “If you want to use both channels, duplicate the audio clip on the timeline, or triple tap a video clip to extract the audio and then set one clip for left and the other to right.”  However, it is not clear whether there is a way to make both individual audio tracks be centered, i.e. to be heard both on the left and right. Perhaps (I am speculating), the user should set the left track to fill right and the right track to fill left. Is that correct?

A3: To have both tracks centered, you would set Fill-from-left on the video clip, then use detach audio to create a separate copy of the clip, and on that second copy, set Fill-from-right. This will allow separate volume/effects on each of the channels, both correctly centered.  We currently don’t have an option to simply center both on a single clip, but if you think that would be a common workflow, it’s something we could easily add.

My followup to Q3: Absolutely yes, as long as there is still access for individual volumes and EQ.

I also suggested (for a future release or a third-party plugin) internal crossgating (see my article My multitrack crossgating audio workflow to eliminate crosstalk) and normalization upon export to different target LUFS options: -23, -24 and -16 LUFS. -16 is the loudest, for Internet/web distribution. -23 is for EBU R128 (European television). -24 is for ATSC (US television and other countries that chose ATSC for their DTV).

Shoot with FiLMiC Pro or MoviePro in the approximate target framerate.

As I have covered in great detail in many past articles (including Video framerates and the Tower of Babel: a translation guide, illustrated above), exact rates like 30.000 and 60.000 haven’t been standard since before 1953. Many standalone cameras and apps unfortunately round the standard 29.97 and 59.94 (also rounded numbers, but precise enough for our purposes) to the closest integers, “30” and “60”. In the case of physical cameras, those rounded numbers usually refer to 29.97 and 59.94. In the case of apps in iOS devices, to my knowledge, all iOS camera apps including the iOS camera app, FiLMiC Pro and MoviePro shoot at VFR (variable framerate) for efficiency’s sake, and the framerate you choose before shooting is only a target, not a final framerate. Generally speaking, any shooting app that doesn’t offer you any framerate choice has a target of ±30 fps only. Both true 24.000 and 23.976 (aka “23.98”) are both standards today, and it’s important to know which to use when exporting (sharing), less so when shooting with iOS devices.

FiLMiC Pro and MoviePro have targets for ±24, ±25, ±30, ±50, ±60 and more. So for this and many other benefits these apps offer, you should be shooting with FiLMiC Pro or MoviePro or some other professional app.

Unless you are shooting and editing specifically for a 720p TV station, I recommend avoiding the use of 50p or 59.94p as a final delivery framerate, since its distribution beyond 720p TV stations is quite limited, with multiple millions of iOS and Android devices in use that can’t play more than 30 fps. Only a few of the latest devices can handle playback up to ±60 fps. So if you innocently were to produce a final product of 50 fps or higher, most of your viewers will end up seeing half of your intended framerate, and the shutter speed you used when shooting will no longer match, and you would no longer have a consistent motion experience on multiple screens. Stay under 30 fps as a final delivery rate unless you are specifically producing for a 720p TV station, like the ±41 in the US I listed in this article.

Choose the approximate target framerate when creating a project in LumaFusion:

Choose the more exact framerate in the sharing step in LumaFusion 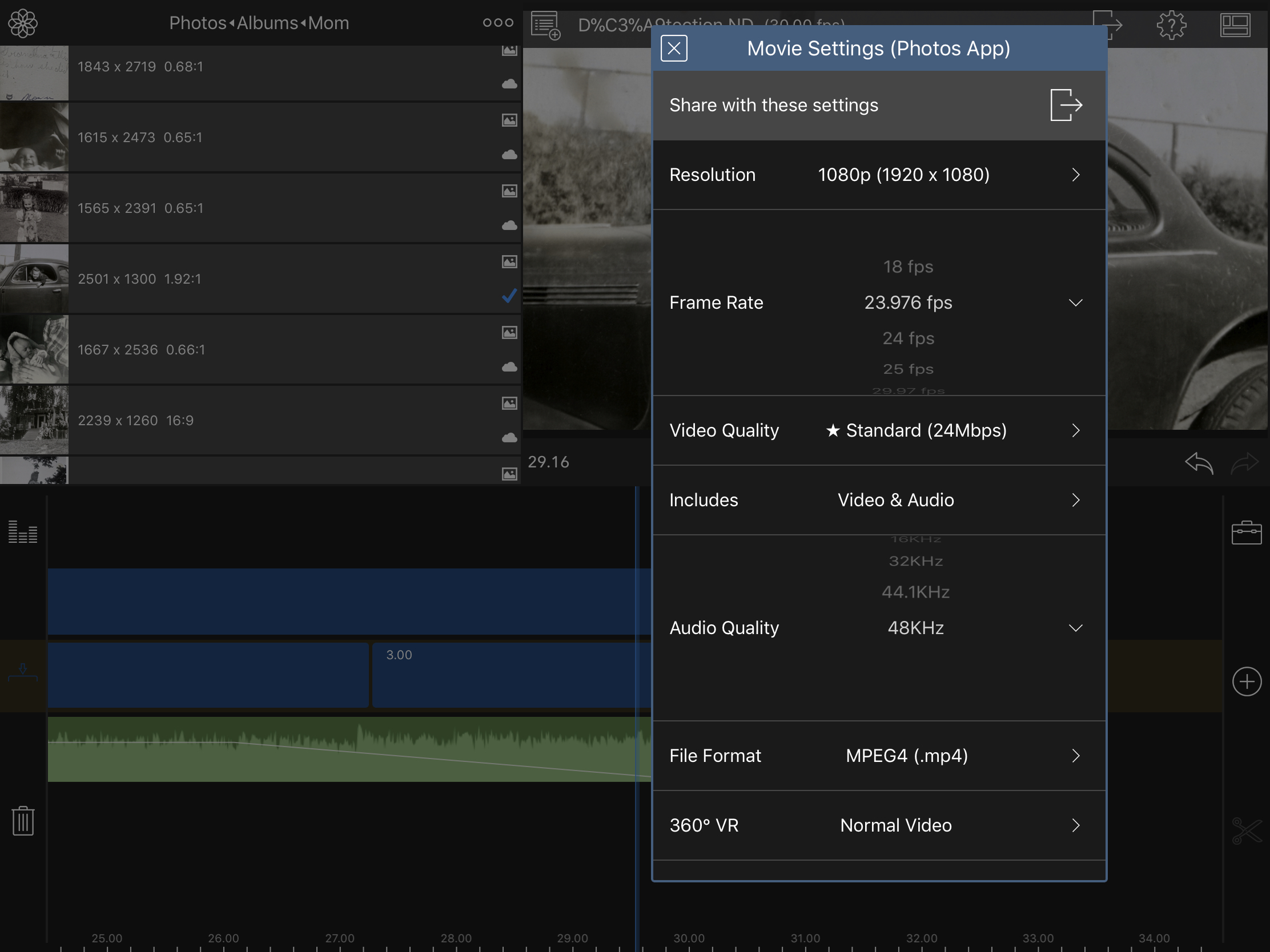