If there’s one thing I hate on my sets it’s the wrong quality of light in the wrong place at the wrong time. Here are the three most common causes, and what I do about them…

I prefer contrasty soft light for most of my work, and while I’m not averse to hard light accents there’s one thing I absolutely detest: unintended hard light flooding randomly across the set. Here are the three most common causes I’ve experienced, and how I fix them…

Black wrap exists for a reason: it is the single best tool to eliminate light leaks through barn doors.

Allow me to explain: 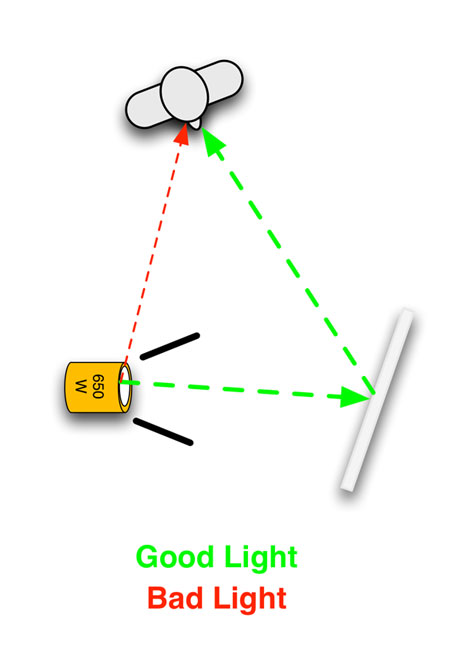 There’s a gap between a lamp and its attached barn doors to allow the use of wire scrims for intensity control. This is fine if the light is hung in a grid or rigged some distance from the set, but if it’s on the set–in the form of an active bounce, for example–it’s very easy for light to pass from the lamp’s lens through that crack in the barn doors and rake across the set. It can be a very subtle effect, and in many situations it’s nearly impossible to see… until the camera is rolling and the actor is giving the performance of their lifetime. That’s when you notice that there’s an extra shadow cast whenever they move their hands in front of their face. Ack!

Solution: I ask my crews to stay on top of this and black wrap the side of any lamp where that barn door gap faces the set.

Another interesting anomaly is the barn door kick: 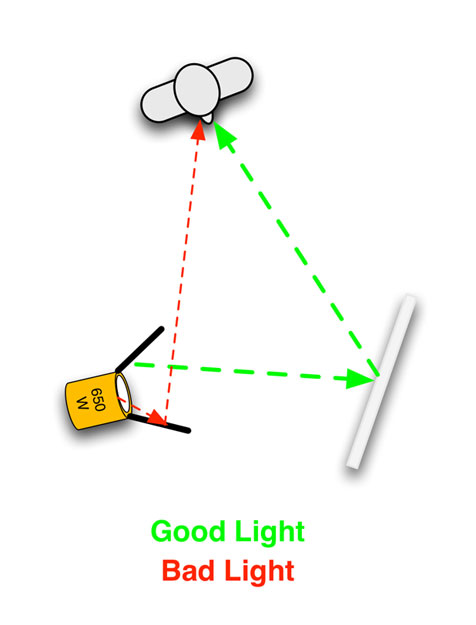 Barn doors are generally not a matte black. The black coating has some shine to it. If one of the barn doors, typically the one opposite the set, is in exactly the right position, it will catch light on its interior surface and throw it across the set like a small shiny board.

Solution: Change the angle of the barn door. Opening that barn door allows light to spill places that you normally don’t want it to, but as that barn door is opposite the set you’re usually lighting something that’s not in the shot. If that something happens to be a white wall, and you change the contrast in the set by spilling light on that wall, open that barn door as far as possible to get it out of the way and cut the light with a flag instead. Black duvetine doesn’t reflect much light.

The last gotcha is a sneaky one: 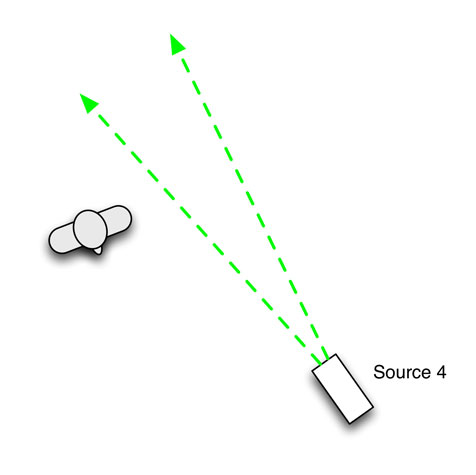 I frequently use Source 4’s to light backgrounds. They’re a very fast way to break up a flat wall: stick a pattern in the light, fuzz the focus to make it a bit indistinct, and off you go. The problem comes when you try to control the output without dimming it: 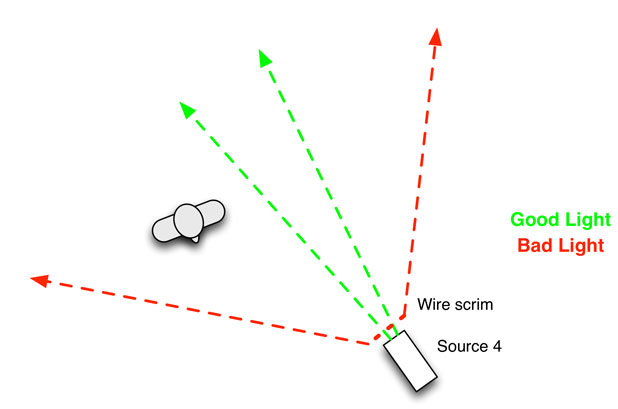 Most electricians will clip a scrim onto the front of the Source 4. NO NO NO NO NO. Why? Because scrims are made of metal. Shiny metal. And when you put a piece of woven shiny metal in front of a lamp, that metal will reflect light all over the place. The round shiny surface of every wire in the scrim will radiate light into the set.

Put a double scrim on a Source 4 and step off to one side. You’ll notice the scrim is glowing. That’s not good.

The scrim becomes a light source. The Source 4 is projecting a beam of light across the set, which is great; but the scrim glows and becomes a 5″ light source that illuminates anything in front of the lamp. Not only does this increase exposure on the set but it casts a fairly hard shadow.

This generally isn’t an issue if the scrim is placed in front of a fresnel lens as the errant light will be largely controlled by barn doors. Source 4’s don’t come with barn doors.

Solution: Only use ND gel on Source 4’s. Gels doesn’t glow nearly as much and the amount of light they project across the set is effectively nil. Or, alternately, use a dimmer.

The best way to detect these sources before they burn you is to look for them. Stand in the set and look for unintended light sources. If you see stray light, block it.

I knew of one DP who so liked the quality of stray light that came off the side of a PAR lens that he’d aim HMI PAR’s straight up into a 4’x’4′, to reduce their output, and use the light radiating off the lens and through the crack in the barn doors as a lighting effect. There are times when this kind of thing can be really cool. The trick, though, is to make sure it happens when you want it, and make sure it doesn’t when you don’t.

All you have to do is remember to look for it.

Art Adams is a DP with (light) control issues. His website is at www.artadamsdp.com.