Rapid technology advances have made computer animation one of the fastest growing industries in Europe and North America. The demand for animated entertainment is growing partly due to expanding broadcasting hours for cable and satellite TV and the ever-increasing popularity of the Internet. Since it launched in 2008, the United Kingdom’s Karrot Animation has become a recognized industry leader, producing 2D animated shows including the international hit Sarah & Duck. Karrot co-founder Jamie Badminton attributes the company’s success to a talented team supported by efficient workflows. 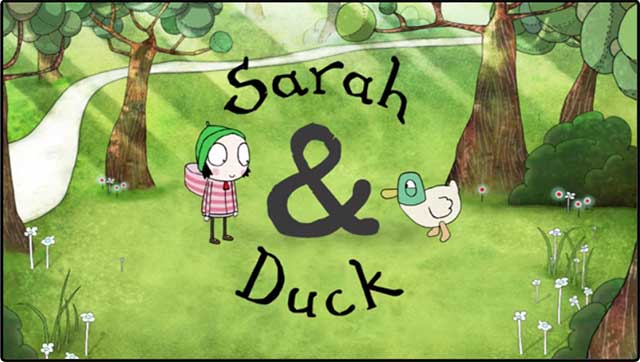 Adobe: How did you develop the Karrot team?
Badminton: I studied to be an animator at Arts University Bournemouth and was in one of the last classes to do hand-drawn animation using cels and cel paint. I learned a lot about storytelling, which has been very helpful lately. I met Karrot co-founder Chris White when he hired me to illustrate a children’s book. We discovered we were both interested in television. He wanted to create children’s programs and my desire was to tell animated stories over multiple episodes. I’ve always been more a fan of television animation than feature film animation.

I went to university with Tim O'Sullivan, who’s our third partner. He was exceptional at solving storytelling problems and a very talented animator. Together, the three of us realized that if we created a studio to do commercial work, we could gain the ability to scale up and produce television programs when an opportunity came along. We used any available downtime to develop TV ideas. When we got a commission to create short videos for the BBC, we hired eight people for six months. When the contract finished, we kept everybody on to develop television ideas. 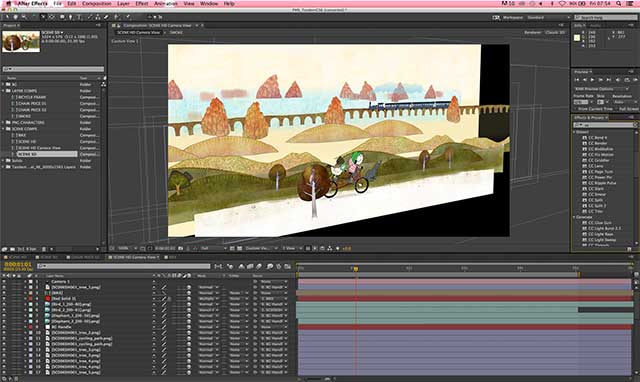 A layered comp in Adobe After Effects CC for Sarah & Duck

Adobe: Did you have particular kinds of shows in mind?
Badminton: We decided to create ten series ideas—five for children and five for adults. Sarah & Duck rose to the top. Tim developed the idea with Sarah Gomes Harris who designed and created the core of the stories. In some respects, it’s about a 7-year-old version of Sarah and her childhood love of ducks. A short pilot created in Adobe Flash Professional opened a few doors for us, but we knew we needed a more serious pipeline. We adopted CelAction because it has an item tracking system that suits TV production and we were able to pitch and win some broadcast contracts. 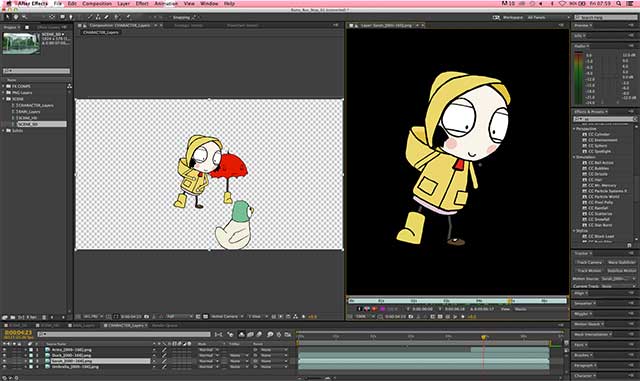 Adobe: Can you describe the production workflow?
Badminton: Being a small organization, we always wanted to create the show under one roof and that’s the crucial part of what Adobe Creative Cloud lets us do. We use Audition CC to collect and edit audio, Premiere Pro CC for animatics and final editing, After Effects CC for character composites and backgrounds, and we create the character art in Photoshop CC. Our animators can store artwork and layers created with Adobe tools in CelAction and work on scenes together. We then output .png sequences from CelAction to After Effects for comping and Premiere Pro for finalization. 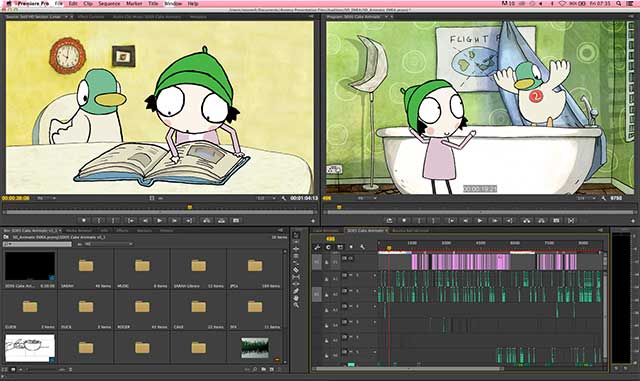 Adobe: How long does it take to produce each episode?
Badminton: For each episode we assign one art director, two designers, one storyboard artist, one scriptwriter, one animation director, and four animators. A typical episode takes three weeks to produce in each department. The animators complete about six-and-a-half seconds a day for three weeks, which gets us to our six- and-a-half minute episode total. 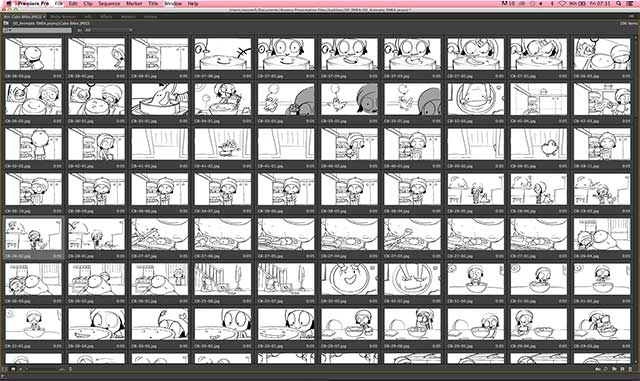 Adobe: Tell us how you bring the audio and animation together.
Badminton: The singular drawn panels are brought into Premiere Pro and the JKL trimming feature in Premiere Pro lets us dynamically trim clips on the timeline. This saves us so much time because we cut hundreds of pictures into the animatic to show everyone what it will look like. 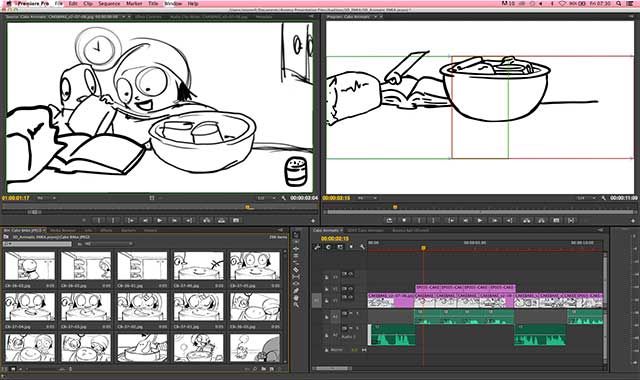 We edit all audio in house using Audition and we don’t lock the sound track before we do our storyboards because we find this limiting. We like having the flexibility to hone the voice tracks while we’re syncing everything together in Premiere Pro. Everything is adjustable until we lock the animatics, which gives us full control over the storytelling process. 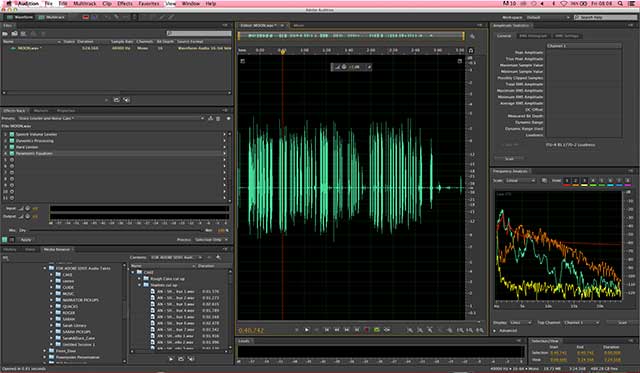 Adobe: Why did you want to do everything in house?
Badminton: It was just crucial that we learned the lessons of making a TV show firsthand. If you start out working with a co-production company straightaway, you don’t know what parts of the process you can’t let out of your sight or what bits you can give more leeway. Adobe software absolutely enables us to do this for the right price.

Adobe: How much are we talking about in terms of cost?
Badminton: Film quality 3D animation can cost upwards of £200,000 per produced minute. Plus, it’s time consuming. The 3D rigging for the character Shrek took 18 months. In television, other producers are creating shows for about £12,000 per minute. Right now, we produce Sarah & Duck for about £8,500 per minute, which is relatively cheap.

I think that’s why a lot of other animation studios are also starting to use a similar process. Our show is seen by many as the benchmark for high quality on a tight budget. We’ve found the magic triangle of cheap, fast, and quality, which doesn’t happen very often. 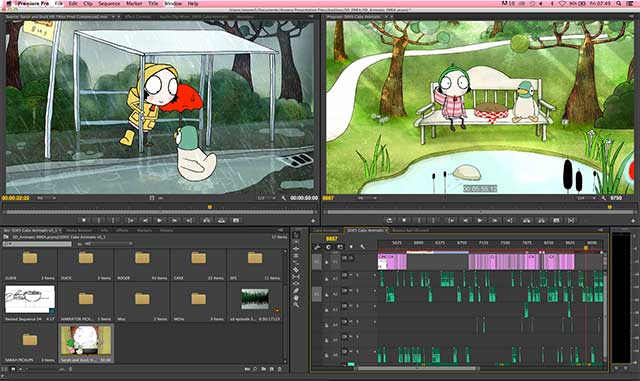 Adobe: What would you say distinguishes Sarah & Duck from other shows?
Badminton: There are two main things I think we do differently. We give our art directors more time to develop backgrounds and other elements that provide tremendous on-screen value. We also crafted our workflows to enable creative flexibility. 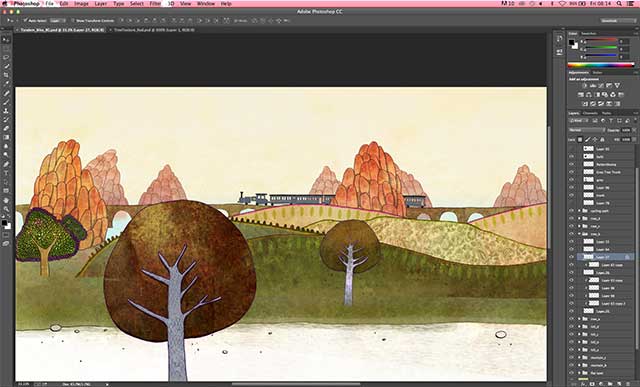 Creation of background for Sarah & Duck in Adobe Photoshop CC

The art director works on storyboard images and produces an art pack, which gets signed off before everything else moves forward. The rest of the team can then look at the art director’s layer files, use of textures, and other flourishes. The show looks quite organic, but the number of textures that we use will surprise people, which is cool. We may use rusted metal, or exotic tile from Marrakech to create unique textures, and those kinds of elements are totally unexpected in preschool TV. It gives our 2D animation a lot of depth and visual appeal.

The art pack is also the last time the BBC gets to approve artwork until we’re finished, so it’s a good production checkpoint. We budget three weeks per department for each show, but we try to be flexible. We want the design team to see what they can do with mixtures of After Effects, 2D puppet characters, and even frame-by-frame animation created in Photoshop. Our editor Mark came up with a great analogy in that the process of producing the show is a lot like watching a duck swimming. Ducks look like they’re gliding along the water, but underneath the surface, they’re kicking like crazy to create the effortlessness that people get to see.

Watch the interview with Jamie Badminton