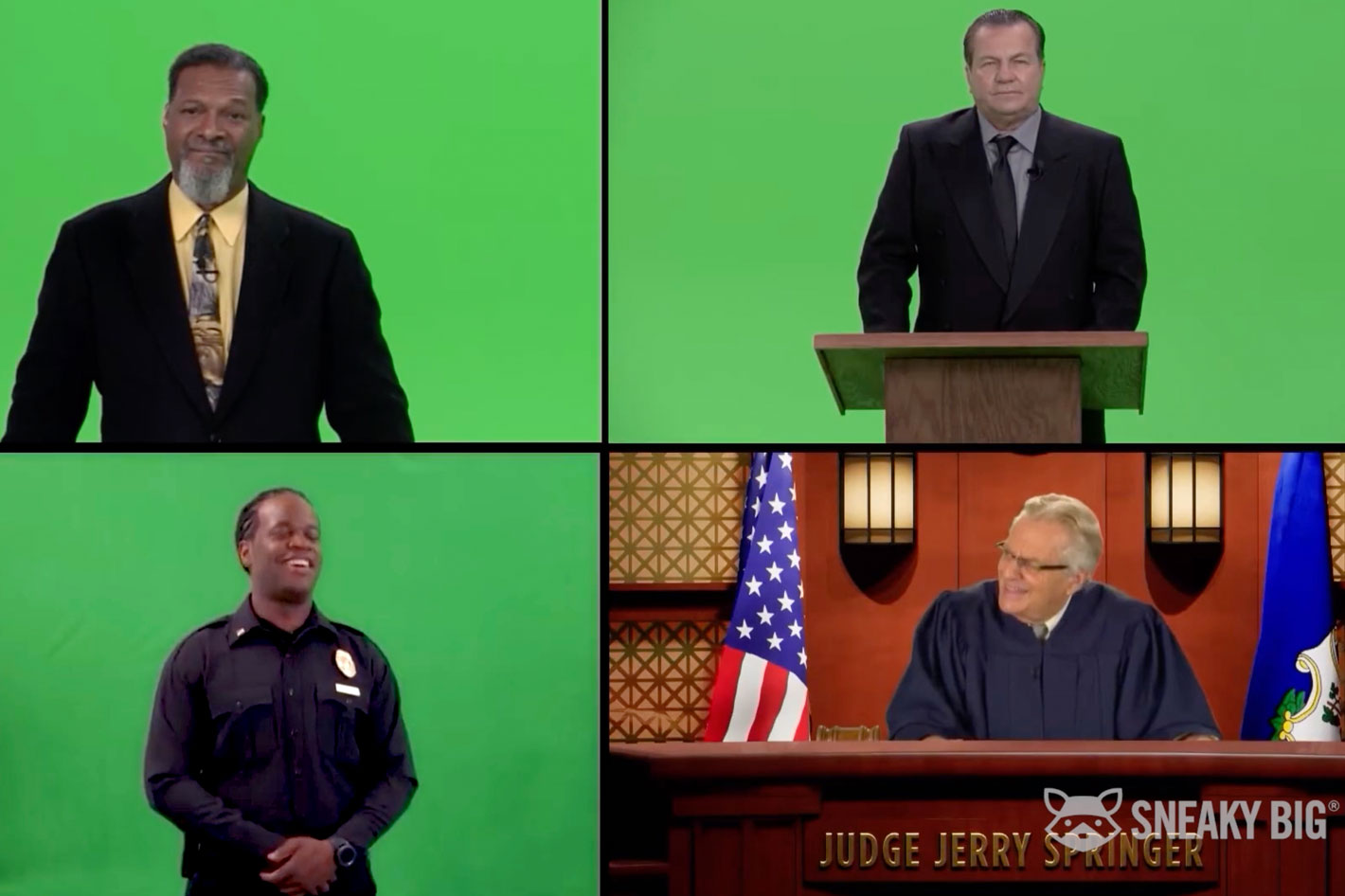 Due to the pandemic, new episodes of the TV series “Judge Jerry,” were filmed in three different states to create a seamless, virtual courtroom experience. Here is how it was done.

The filming industry has always been about imagination, but the pandemic took things to a new level, as crews had to imagine new ways to shoot, while following social distancing rules. Virtual production is now a popular term among filmmakers, and the things learned during the last year will, no doubt, stay with us longer, and be adopted for many workflows, simply because they make some aspects of the work viable… something no one ever imagined before.

A good example is the recent story from how Blackmagic Design partnered with Arizona based studio SNEAKY BIG, working with NBCUniversal Syndication Studios (NBCU), to continue to produce new episodes of the hit TV show “Judge Jerry” during a global pandemic. The partnership resulted in a virtually produced “Judge Jerry,” which was effectively a “quarantine court” where litigants received “virtual verdicts.” The studio relied on Blackmagic Design’s Ultimatte 12 real time compositing processors to film in three different states and create a seamless, virtual courtroom experience.

SNEAKY BIG’s talented crew used standard field cameras to film the show’s second season. Each feed was sent back live to the studio where they were fed into five Ultimatte 12s, which produced the mattes. An Ultimatte Smart Remote 4 was also used during production, alongside six Teranex 2D Processor standards converters to standardize the video format. 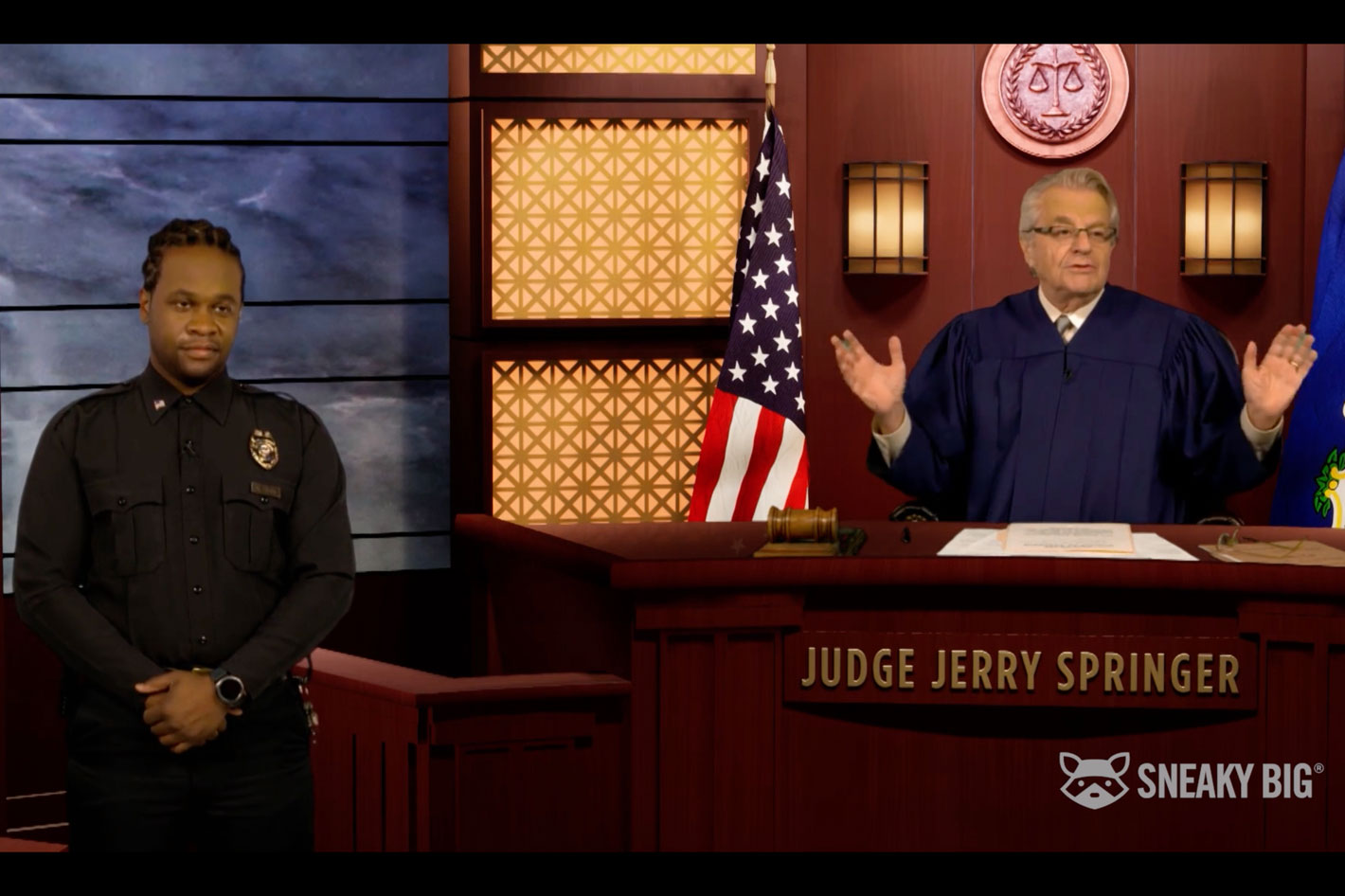 Judge Jerry was filmed on a green screen

“We are honored to have been a trusted partner for this groundbreaking project and to have helped set the bar for high quality, safe TV productions,” said SNEAKY BIG CEO Marianne Guenther. “For the past several years, the SNEAKY BIG team has been doing incredible work utilizing interactive, 3D virtual sets. It was an exciting experience to bring these capabilities to NBCU so their productions could continue.”

To achieve virtual production on “Judge Jerry,” Judge Jerry was filmed on a green screen from his home in Florida, and the show’s Bailiff Najee Hinds was similarly filmed at home in New York. The team used pop up green screens and green studios located across the country to allow litigants to remain local, avoid travel costs and comply with COVID-19 safety measures. In “Virtual Verdicts,” Judge Jerry and Bailiff Najee were filmed on green screen in the NBCU in Stamford, CT.

“The pandemic made all of us rethink how we do business and really brought virtual production to the forefront,” said Guenther. “Virtual sets allow for greater flexibility at a lower cost. We think this type of production and technology is here to stay.”

The studio has worked on several pilots and corporate VR productions that, pre pandemic, would have been live events. However, by transitioning to virtual events, the studio has been able to deliver elaborate sets that would have been much more expensive had they been physical builds.

Since the company’s inception in 2016, SNEAKY BIG has utilized advanced technology, including Ultimatte 12 and additional Blackmagic Design equipment, like the Ultimatte 12 real time compositing processors for virtual production, to offer a full suite of production and virtual services. The studio has several branded projects slated for later this year and will continue to provide state of the art services to all clients, employees and community members. To learn more about its services and recent projects, visit SNEAKYBIG.com.