Talent, not tools, make the cameraman (or woman). 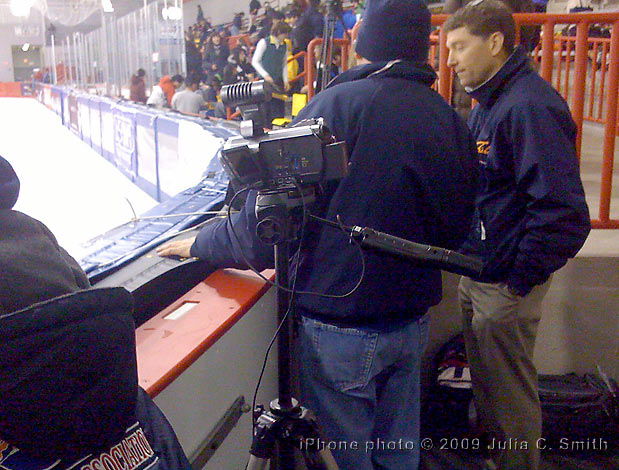 Speedskater and part-time videographer Julia Smith writes, regarding the image you see here:

“This setup with cameraman yields this kind of work:

I keep telling Tony he has camera chops.”

I skate with Northern California Speedskating Association. Active skater and fan. I am Zclyh3 on YouTube.

The camera is a Sony HDR-HC7, with a Sony ECM-HST1 attached microphone (90 or 120 degrees) attached to a Sony VCT-D680RM tripod. Additional accessories include a Sony VCL-HG0737C wide lense 0.7x in case I need wider shots. I have a Sony HDR-HC9 as a backup camcorder that I recently got at a great deal, although I should be using the HC9 to record rather than the HC7. But I typically use the HC9 to transfer to my laptop while I record with the HC7. Laptop seems to connect better with the HC9.

A bit of snuffling around on the ‘net indicates that the HDR-HC7 is a fairly user-unfriendly HDV consumer camcorder, while the VCT-D680RM is a flimsy, friction-head tripod. Neither one is what you’d normally think of if your goal is live coverage of fast-moving speedskating.

And yet: look how smoothly Tony tracks the action, and how quickly and comprehensively he covers the falls and then rapidly returns to the remaining skaters.

Can you do as well with your multi-thousand-dollar rig? I’m not sure I can.

Elite coaches and skaters, we’re talking international competition here, are all over Tony for his footage, because it’s hard to get video for study. He covers races better than the professionals with his dinky consumer level camcorder. (I had to cover for him during some races, when he was participating in a few of the events. I went green about the gills when I first used that tripod head.)

Taking a contrarian view, the low mass of the camera and head make it simpler to snap from one part of the action to another (even as it makes smooth motion more difficult), and the fiddly little zoom lever facilitates quick zooms (even as it makes fine control nearly impossible).

But even if that is the case, I’m not sure I’d want to be pitted against Mr. Chung in a battle of speedskating videographers. He’s good.

To heck with the gear: knowing your subject, skill, reflexes, practice, and just plain talent are what really count.