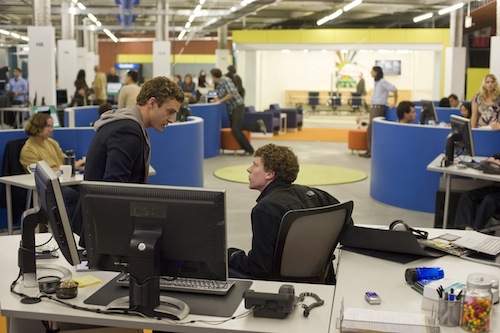 I’ve been as absorbed as anybody lately in the buzz surrounding David Fincher’s new movie, Social Network-his and writer Aaron Sorkin’s rendering of the madness surrounding the founding of the Facebook social networking web site. That’s because I recently penned two articles about the movie-thankfully, not dealing with whether the movie is, or is not, a faithful telling of what actually went down at Harvard University a few years ago. Rather, I wrote about the undisputed innovations Fincher and his digital filmmaking team utilized in making the movie in the data realm without using physical media for the most part, both in production and in editorial.

First, you can read the production story of how Fincher and DP Jeff Cronenweth, ASC, shot the movie through an all-RED workflow in the October issue of American Cinematographer magazine. (You can find the article here in their digital edition, and can subscribe for free with a click or two.) As I wrote, production of the movie was innovative for many reasons since the Fincher team has been on a jag to lead the way in digital filmmaking without physical media since before they shot Zodiac in 2007.

With Social Network, they converted from Thomson Viper cameras, recording to hard drives to the RED universe, including being the first Hollywood feature, according to what Jim Jannard told me, to shoot with what was then the brand new (beta, in fact) Mysterium MX 4k chip. (As my story will tell you-the cameras were Steven Soderbergh’s and Fincher asked RED to upgrade them with beta MX chips.) Then, he recorded most of the movie to 16-gigabyte CF cards, with the exception of a few scenes recorded onto RED-Ram and RED-Raid hard drives. Fincher and his colleagues believe this was the first major studio feature recorded largely to data cards as a result.

Next, I put together a piece for the Editor’s Guild web site about how Fincher’s co-editors, Angus Wall, ACE, and Kirk Baxter, cut the movie together in an all-data workflow. You can read that article here.
Both editors, and one of their assistants, Tyler Nelson, were particularly jazzed about explaining how, creatively, the larger chip helped editors work with a larger frame, and how technically, the entire production, pretty much from soup to nuts, was linked together virtually using the Pix System secure online media platform.

As we got to talking, Wall, who has been a close Fincher collaborator for years and a fellow acolyte of the data school of movie-making, informed me his own company, Datalab, has been working recently with Pix to build a hardware transcoding system to plug into their pipeline and make aspects of the workflow simpler and more interactive. The creation of that box is now happening, Wall told me, and it is dubbed, for now, Wrangler. He expects you will see it on the market at NAB and elsewhere in the near future, and to make sure it’s as good as he thinks it is, he’s incorporating it right now into the workflow for Fincher’s next film-2011’s The Girl with the Dragon Tattoo.

This led to a much larger conversation about the issue of standardizing parts of the digital workflow rather than making the whole thing largely “ala carte” (his words) depending on who is making the movie and what their resources and preferences are. By moving toward standardizing part of the workflow, Wall thinks it will become easier to shoot and use data and metadata in the virtual world, and communicate about that data if you are a filmmaker who wants to get rid of film, tape, and even hard drives during the acquisition process and beyond. The creation of Wrangler, evolving as it did out of the production of Fincher’s recent movies and commercial projects, was designed as an attempt to make shooting digitally “easier for more people to do, and more inexpensive,” Wall insists.

It’s still in the early stages, but Wall is completely jazzed about this whole paradigm shift, and how it ties into the acquisition paradigm shift that Social Network also represents through its adoption of the RED workflow and the MX chip, among other things. So much so that he agreed to discuss it all in detail with me here. So, click below and you will hear an important portion of our conversation. I think you will find it particularly provocative and apropos to the larger question of where the digital filmmaking paradigm is taking us, or might be taking us anyway. Hope you enjoy it.

Social Network gets RED, and really virtual from ProVideo Coalition on Vimeo.