Mobile Internet connectivity improvements through upgraded networks, smart phones, better data plans and more content are the main reasons why mobile advertising is starting to shift from “What’s all the hype about?” to “Finally, it’s catching up to the hype” mode. eMarketer reports that 2008 was where hype and reality crossed paths and now the future of the mobile advertising industry is poised to explode.

Regular readers of Marketing Pilgrim may be familiar with my disdain for predictions of how an industry will grow 5 years from now. These prognostications are educated guesses at best and wild eyed speculation at worst. Though they can be fun to gawk over they often times look ridiculous when seen through the rear view mirror of reality. The following chart shows just eMarketer sees the growth of US mobile advertising spend for the foreseeable future. 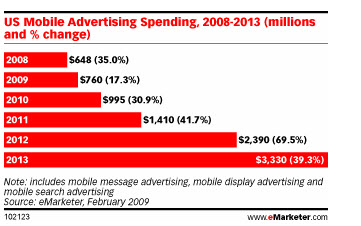 The numbers offered in this study contend that the big jump in adoption of mobile advertising will occur between 2010 and 2012. Of course, this is anyone’s guess as to real numbers but the growth should be significant even if it falls short of these predictions.