It had been well over a year since I saw my good friend and longtime business partner Final Cut Pro 7 but this week saw the opportunity request to open it back up and work on a music video. Rather than try to convince the production to move to something else (believe me, I’ve tried) I jumped in! Then I noticed I needed to install it on my laptop … that doesn’t have a DVD drive. Nor do I have an external one. It’s still possible and you can even update to 7.0.3.

Good morning #fcp7 it's been a long time. Like over a year. Let's work well these next few days.

A photo posted by @editblog on

This Final Cut Pro 7 job began on my old Mac Pro tower (seen in the image above) which is still running OS 10.9. I already had FCP7 installed on that machine but had to do a large part of the cutting on my laptop. It's running 10.10 and didn't have FCP7 installed.

I knew this day was coming so I began by taking the stack of Final Cut Studio 3 install DVDs and making a disk image of them on a hard drive. Yes there is that Remote Disc thing in the Mac OS where you can use another Mac’s DVD drive to read a disc from another computer but I’ve never tried that. Plus I wanted a backup of all the Final Cut Studio installers in case my discs went bad or the DVD drive on my Mac Pro went bust. 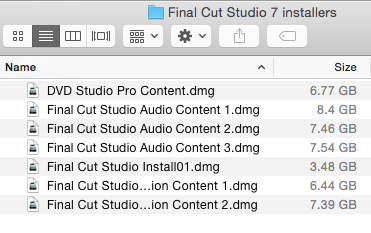 With all the Final Cut Pro Studio install DVDs backed up it makes for an easy install of Final Cut Pro 7. Just remember to keep your serial numbers.

Once that was done I plugged the USB3 drive into my Macbook Pro and mounted the first install DVD. Final Cut Studio 3 is gigs and gigs of content across 7 DVDs but I only wanted Final Cut Pro 7 so it was a matter of only checking the Final Cut Pro install option. It took just a few seconds and it was installed. 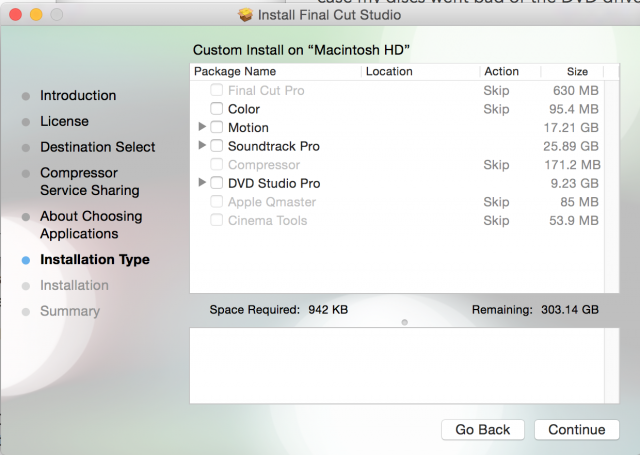 The custom install lets you choose exactly which apps from the Studio to install. I only installed Final Cut Pro. It’s grayed out in the image above since it was already install on this Macbook Pro Retina.

Upon launch I got immediately worried as the version of Final Cut Pro it installed was 7.0.0 and Apple left FCP Classic at version 7.0.3. That’s the version I have at the office and FCP Classic was never good at opening older project versions even with only minor updates to the app.

But never fear as Apple has archived most all of the FCP Classic updates on their support site for easy download and updating. And the Pro Applications Update 2010–02 that takes FCP Classic to 7.0.3 is right here. In fact a good Final Cut Pro 7 “Classic” page to bookmark (if you’re still into this thing) is the FCP7 support page as it’s a good jumping off point for FCP7 in general.

Upon trying to install I got the warning that the installer is “unsigned” which despite my security preferences allowing “identified developers” this updater won’t launch. If you ever encounter a problem just make a Twitter comment and the world will come to your aid (though it was more to be sarcastic than anything).

Really Apple? Your own Pro Apps update to get to #fcp7 7.0.3 isn’t verified? Or whatever you call it? pic.twitter.com/pBiVX1MTWp

You go into your Security and Privacy Preferences and change it to Allow apps downloaded from Anywhere. This updated was created long before that security preference was a thing in the Mac OS.

This security features was introduced in the Mac OS a couple of versions back.

A Twitter comment always elicits a response and here is a good one about the security preference above as well as a tip for when this happens:

@editblog i.e., that update predates the code signing by 2 years. Protip: right click and select open, it lets you bypass without disabling

With that the update ran, Final Cut Pro Classic updated to 7.0.3 and I was off to the races using Final Cut Pro 7.0.3 on a DVD drives-less Retina Macbook Pro.

I’m still not sure why Final Cut Pro Classic asked for access to my contacts during the install.

@editblog Also, the reason FCP 7 asks for your contacts is to pre-populate the registration dialog with your info.

But there's the answer!

Once the update was installed it was time to go to work. 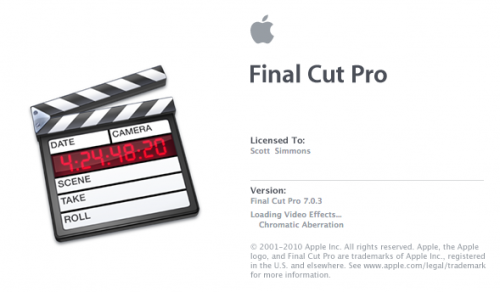 It was like seeing an old friend as the FCP7 splash screen launched.

Overall the edit went very well. Not a crash, not a peep from Final Cut Pro 7.0.3.

A photo posted by @editblog on