Announced at CES 2018, the new Insta360 Nano S is a compact camera able to transform your iPhone into the ultimate tool for capturing, sharing and communicating in 360°. 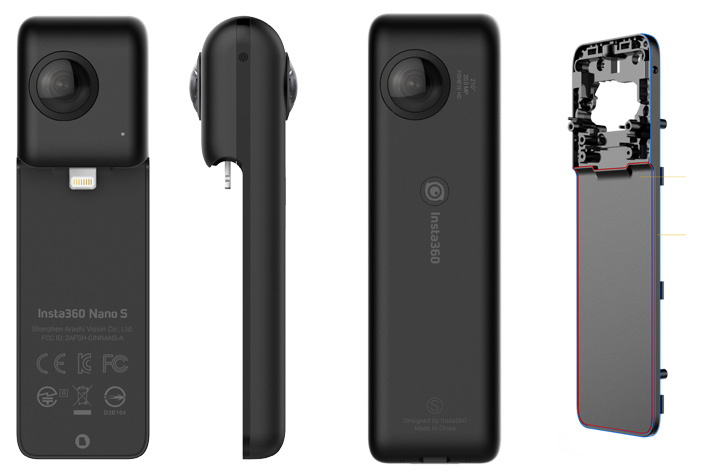 The Insta360 Nano S is a next-level successor to the Insta360 Nano, launched in 2016. The new model introduces 360° Video Chat and the new MultiView feature.

The new Insta360 Nano S is on show at CES 2018, in Las Vegas. Visit Insta360 booth to see and try the camera, but also to get an exclusive first look at two never-before-seen innovations from the camera maker. These technologies represent, says Insta360, the cutting edge of immersive image capture, and offer a glimpse into the breakthroughs Insta360 has in store for creators.

Ready to shoot 4K 360° video and 20 MP 360° photos, the Insta360 Nano S introduces 360° Video Chat and the new MultiView feature – allowing users to show multiple angles of a scene simultaneously and share them via a live broadcast or one-on-one chat.

“With the Insta360 Nano, we invented a new category – a 360° camera that lets people capture immersive content straight from their phones. Now, the Nano S is taking that concept in a revolutionary direction,” said JK Liu, Insta360 founder and CEO. “360° Video Chat, and the ability to show multiple views of a scene at once, empower people to communicate their experiences more fully than ever.”

As with its predecessor, the Nano S connects directly to an iPhone’s Lightning port, converting the phone’s display into a real-time 360° camera viewfinder and allowing for convenient capture, storing, editing and sharing of content via the Insta360 Nano S’ companion app. When creators prefer to use the camera as a standalone device, an onboard memory card slot and rechargeable battery make it easy.

While the 360° video call option may seem a simple call function, because it works regardless of whether the recipient has an Insta360 camera, it transfoms a call in something else, as with a simple swipe gesture, recipients of a 360° video call can freely explore the world from the perspective of their caller.

To start a 360° Video Chat, users can simply generate a link in the Insta360 Nano S app and then send it to a recipient via any chat or social app. When the recipient opens the link in their web browser, they’ll get a real-time 360° view of their caller’s environment. Meetings, travel experiences, and calls to family and loved ones, will never be the same, but the uses of the feature go well beyond those social aspects.

MultiView capture is another feature that is appearing associated with the resolution 4K offers and seems to be more than a gimmick. In fact, in this case, it lets users take advantage of 360° video’s unique benefit – capturing in every direction at once – but also gives them the freedom to control a narrative and curate their footage to tell a story in the most effective way.

With five different layouts and up to three simultaneous angles, MultiView allows users to adjust the content of each section of a split-screen layout individually. The level of zoom is also adjustable, so that users can zoom out to see a full 360° view projected as a “tiny-planet” in one frame, while focusing on key subjects in another. 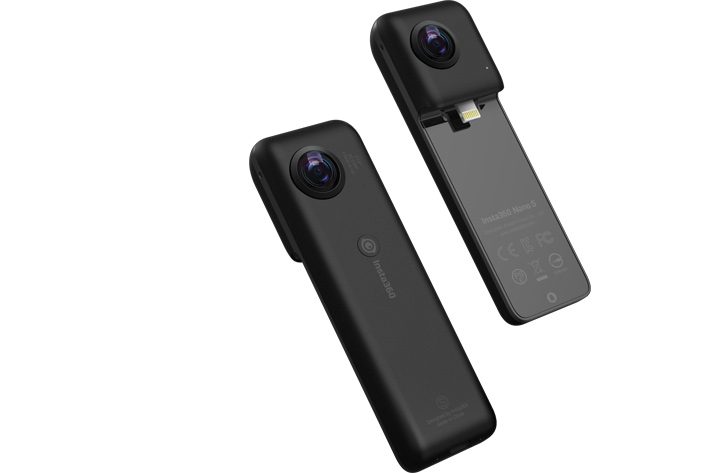 MultiView, says Insta360, is perfect for sharing context or scenery while also capturing a creator’s reactions.

The Insta360 Nano S supports Insta360’s FreeCapture technology, allowing users to reframe the best parts of a 360° video in a standard rectangular frame. The magic of FreeCapture is in the unique method of framing a shot – users can re-capture a scene by maneuvering their phone in real-time to explore a 360° clip, exactly as though they had returned to that moment in time and were filming it with a standard smartphone camera. It’s a clever inversion of the usual work flow – letting users shoot first and point later.

FreeCapture, adds Insta360,  empowers people to focus on enjoying the moment while they’re actually living an experience, with the assurance that they won’t miss a thing – in any direction. Then, once the experience is over, they can take their time to review and recapture the best bits.

When it comes to stabilization, the new camera has you covered. As the Insta360 Nano S isn’t big, it has to be smart. So, rather than bulk up the device with an internal gyroscope, Insta360 engineers decided to give the Insta360 Nano S access to the ultra-precise gyroscope that people already have in their pockets. The Insta360 Nano S syncs with an iPhone’s onboard gyro, and corrects for every wobble and shake in real time, using an all-new stabilization algorithm. The result is, according to Insta360, buttery-smooth footage that’s a dream to watch.

In addition to the new MultiView broadcasting feature, the Insta360 Nano S also offers integrated support for 360° live-streaming on YouTube, Facebook and Twitter (via Periscope), letting users share real-time, interactive views of their worlds. Users can easily share their favorite photos and videos to any major social or chat app straight from the Insta360 Nano S app – regardless of whether the platform offers native support for 360° content.

For 360°-supporting platforms like Facebook and YouTube, it’s as easy as linking an account and hitting ‘Upload’. For others, such as Instagram, Snapchat and WhatsApp, the Insta360 Nano S offers a host of ways to convert 360° content into a ready-to-publish form – from customizable 360° photo pan-arounds, to MultiView and FreeCapture edits, to sharing a link to 360° content hosted on Insta360’s free server.

Available in two colours, silver and the new matte black, the The Insta360 Nano S has a suggested retail price of $239.00 and is now available.