Citing a lack of genuinely localized programming, the independent regulator of communications in the United Kingdom, Ofcom, asked media businesses what they would do with a Local Digital Television Programme Service (L-DTPS) license. The London Evening Standard and The Independent newspapers proposed London Live, a 24/7 television station dedicated solely to producing programs for London audiences. Bryn Balcombe, technology director for London Live, is the primary architect of the new station’s broadcast and production infrastructure. He chose Adobe Creative Cloud for teams for its ability to support production and distribution of standard definition television over the air and high definition television on any device.

Adobe: How was London Live chosen over other L-DTPS applicants?
Balcombe: The tender process was not a financial bid. Ofcom wanted to know how we would use the license to support local programming. We proposed producing five-and-a-half hours of news and current affairs every day, plus one to three hours of locally-produced entertainment content per day. The rest of the broadcast schedule includes historical content, retro television series about London such as London’s Burning, and acquired or commissioned shows shot or produced in London, including Place Invaders, Drag Queens of London, and Food Junkies. Ofcom believed our proposal would deliver the most value to the local community, especially because of our commitment to news and local affairs. 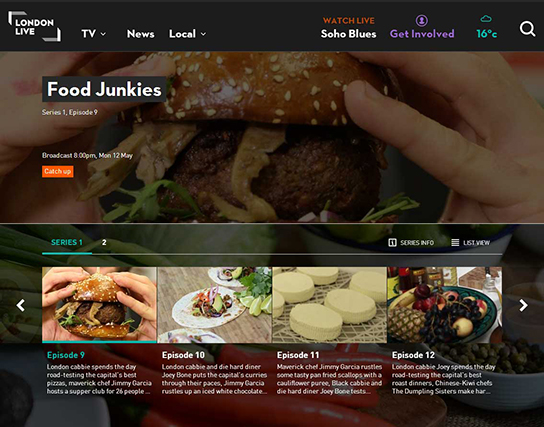 Food Junkies cuts straight to the core of London’s food scene. With big flavours, bigger portions & the biggest characters, it’s the ultimate guide to who’s eating what & where.

Adobe: How long did it take to launch London Live?
Balcombe: We had seven months to get everything up and running. Other than the London Evening Standard and The Independent committing their support, we had nothing in place. We had to assemble the team and put the broadcast infrastructure together from scratch. We went live on March 31st.

We chose Premiere Pro as a key resource because the multiformat timeline gives us more flexibility. We also like the open, plugin architecture and its ability to integrate with other vital newsroom technologies, such as Sienna and ChyronHego. We transcode with Adobe Media Encoder CC, build graphics with Adobe After Effects CC, and use Adobe Photoshop CC for different online and live graphics purposes.

Adobe: How are you supporting your local news operations with Adobe Creative Cloud?
Balcombe: We’re covering London and 33 surrounding boroughs, and we want to produce content at the hyper-local level. Our ten video journalists need tools that are fast, light, and mobile to cover it all and they use Premiere Pro exclusively. They gather high-definition images and video using Nikon DSLR cameras, which they can edit immediately using Premiere Pro installed on 13-inch Apple Macbooks we had designed for use in the field.

Production journalists in the studio also use Premiere Pro on desktop iMacs. With our scripting tool, AP ENPS, they can edit show openers and make changes to packages practically right up to air time. Premiere Pro is also essential for re-cutting stories. We have a three-hour morning show, for example and we evolve the content from one hour to the next.

Premiere Pro is also our failover solution. We use an automated Sienna media asset management system for news archiving and playout, and most of the journalist packages are sitting in there ready to be aired during the live broadcast. However, two of our iMacs have been set up for manual playout, so we can also play late-breaking news directly from the Premiere Pro timeline to air. 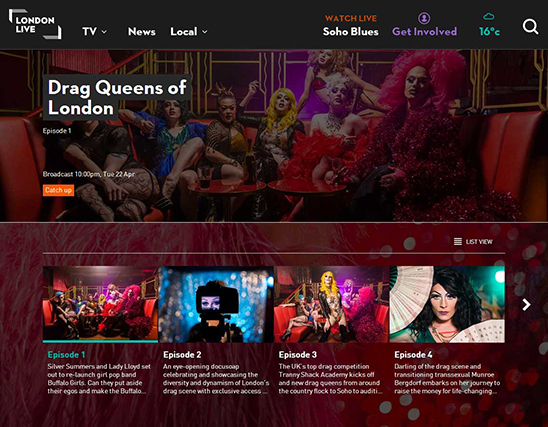 An eye-opening docusoap celebrating and showcasing the diversity and dynamism of London's drag scene with exclusive access to the best queens in town!

Adobe: What kinds of editing projects are you supporting with Adobe Premiere Pro CC?
Balcombe: For the acquired and commissioned programs, we have to make sure that they are broadcast-ready and meet regulatory compliance standards. We have three editors who use Premiere Pro to help ensure that the language in any program is appropriate for the time of day, for example. They also make sure that the shows are compatible with our Ericsson playout system. With Adobe, we can be more flexible on the formats of incoming media, edit any format on the Premiere Pro timeline, and then output with Adobe Media Encoder CC.

Another team of three editors produces all of our promotional material. There’s a lot of cutting, such as taking video snippets from upcoming programs and adding graphics we produce in After Effects. Premiere Pro lets us take source materials from different providers in different formats and put them all on one timeline to get exactly what we’re looking for.

Adobe: Where does Adobe Photoshop CC fit in?
Balcombe: We do two exports from Premiere Pro, one for broadcast and one for our web and mobile channels. We use Photoshop for a lot of our online content and for graphics. The digital team takes screenshots from video or collects images from news or wire feeds and uses Photoshop to format them for web and mobile devices. We also use Photoshop to prepare images for use in our newsroom’s live graphics system from ChyronHego.

Adobe: What do you expect the newsroom of the future to look like?
Balcombe: Our license from Ofcom allows us to broadcast in standard definition quality until it expires in 2026. We could have gone all SD, but we expect the technology to change massively between now and then. Right now SD is our broadcast, terrestrial cable, and satellite format. But we produce everything in high definition. Our field and studio cameras are all HD, so we are not limited by initial quality. Everything we distribute digitally is in HD.

One of the visions behind putting journalists in the field with laptops is to use IP-based connectivity. We use microwave Ethernet service instead of satellite trucks, and that lets us playout directly from the Premiere Pro timelines on their Macbooks. We can turn them on anywhere, whenever we need to, and it’s seamless.

Adobe: Now that London Live is on the air and on the web, what’s next?
Balcombe: We built the foundation at the minimum cost just to get it running. Now that we’re live, we are fine tuning. We are learning a lot about who’s doing what, how they’re doing it, what they need, and what will drive efficiencies. As we continue developing our vision of taking the entire station and putting it in the cloud, we are looking at other Adobe solutions, such as Adobe Anywhere for video collaboration, Adobe Primetime for live, linear, and video-on-demand programming, and Adobe Experience Manager for content management.

Watch the interview with Bryn Balcome