Anarchy amid the abdication of Mac Pro

This is the story of one man’s experience assembling and running a Hackintosh. For anyone unaware of this illicit, but not yet forbidden alternative to the Mac Pro and alterative systems from Apple, it is a custom-built computer – one which would straightforwardly run Windows or Linux – with an installation of a slightly modified (hacked) Mac OS that will boot on non-Apple hardware, in clear violation of the terms of the Mac OS.

Video professionals as a group have become much more curious, if also still wary, of this option given that It significantly outperforms Apple hardware at roughly half the cost of even the most basic new Mac Pro system. For their part, Apple has neither condoned this approach, nor have then implemented the types of technological barriers that would make it impossible to implement. Officially, it’s unsupported, legally, it’s a gray area, and in real-world terms, it involves more trade-offs and complications than just owning a Mac. This is one article about the benefits and trade-offs for a video professional.

So why do it? Late last year, I found myself in the perfect position to dip my toe into the world of Hackintosh (or, as it is sometimes spelled, Hacintosh). I had negotiated with a client to purchase a system specifically for use on a set of projects, and when I presented them with the cost of a new Mac Pro system, even with all possible extras purchased from third parties, the cost was several thousand dollars out of budget; at that time, over $7000 delivered, without the storage or memory needed. A prosumer iMac, which is all the rage in design firms these days, was not ideal due to the need for advanced graphics and the desire for built-in support for large storage, dual monitors, and full connectivity, not to mention enough brute-force processing needs to benefit from the 30-60% difference in performance. Even the current Apple Mac Pro offering outperforms the latest iMac by 30%, and for jobs that involve a good deal of rendering, even that difference adds up to days over a period of months.

A VFX supervisor friend in San Francisco had, years ago, pitched a side business he and a friend had to build Hackintosh render farms. We priced out a system that, even including the $500 assembly and installation feel, indeed came in at exactly half the equivalent cheapest Mac Pro system, and in computing terms was a full generation newer. All but two of the 23 components were available and/or least expensive from Amazon (one more case of getting value from a Prime account).

Key components in this system were as follows:

The full list of components proved unwieldy to break out into a table for this article, so rather than further delay posting the article for that reason, I elected on the above summary. Needless to say, if you're building your own system, you or the person you work with should be up to date on the latest components and their relative merits and deficits. 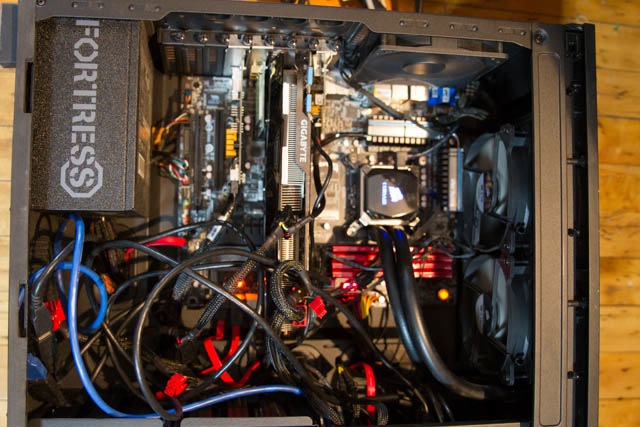 After the fire, a tangle of wires, but the liquid cooling unit shows blue, indicating system health nonetheless.

Needless to say, I was thrilled to have a system that only cost a few thousand dollars and put my 3-year-old Mac Pro to shame. Among the features I liked best were the liquid cooling unit, which I could monitor with a sensor in the menu bar, but which also features an integrated LED display that allows it to a display a color that reflects its current temperature – blue or teal until you get into the 70-90 degree Celsius range where it turns an intuitive red/orange/yellow to warn that you’re getting close to where you might see some problems. I loved having USB3 and Thunderbolt included, even if the latter came with system limitations from Mac OS – no hot-swapping. I was happy running off an SSD, and the boot system was clean, if a little odd – no apple logo on gray at startup, but instead an ugly screen from the motherboard’s ROM that looked like it hadn’t been redesigned since about 1993.

Among the limitations of the current Mac Pro that are resolved by the Hackintosh, as run down by the guy who built mine:

Bottom line: this system performs like a hot rod, which means it is on the bleeding edge of performance and as a consequence can involve trade-offs and extra maintenance you wouldn’t expect with a stock system.

One result of the hack is a system that self-reports in Mac OS up as a Mac Mini—the fastest such Mac anywhere.

And then, early one recent morning, an acrid scent filled the studio.

Once as the system was up and running, I proudly tweeted a Geekbench score of 17,025 (processors overclocked to 4.7Ghz) and got to work – and almost immediately ran into stability problems. Applications that I knew to be rock-solid were crashing, and there was no other obvious symptom such as an overheated system. Within a week we were backing down on the overclocking and ordering a replacement CPU to cross-ship to me under warranty.

Here I will pause to emphasize the patience required to get a Hackintosh up and running, despite its tremendous speed benefits once implemented, and how necessary it is to have a dedicated, knowledgeable tech who can built, configure and troubleshoot the system. This is not truly what I would call DIY, unless you are the type of person who likes to noodle around with BIOS and so on – a personality type more associated with Windows and Linux than Mac, perhaps. Things will come up that, while par for the course for Hackintosh, are outside the experience of a regular Mac user.

Instead of Applecare, I had support from the guy who built the machine, who was very patient about ironing out issues with the processor and who reassured me that my system was an outlier. You could look at it as reassuring that if I had a substandard yet functional component as essential as the core processor, it’s good luck that it was in a system that would clearly show it to fail, and would allow me to return just the chip via a warranted cross-ship. I’ve often noticed that two Macs that are configured identically don’t perform the same, and those of us who have worked in larger shops are aware that some systems are simply more or less stable and high-performing than others, which can even become the problem-child machines that are most likely to fail renders and so on.

Once we had a new processor installed and the machine was overclocking properly (as much as a non-sequitur as that may sound), I noticed a few quirks – some intermittent, some persistent:

And then, early one recent morning, an acrid scent filled the studio.

Yes, I know just what you’re thinking. This clearly wasn’t at all related to overclocking or bleeding edge graphics; a big hole was burned in the optical drive, indicating a probable short that also took out enough of the cabling and interior of the system to require a case replacement, and caused a drive in the RAID-5 (also not a standard Mac OS option, and thank god I had it configured that way) to fail. The acrid scent hung around for a few days, and of course, if one component fails even in so spectacular a manner, the manufacturer of that component cannot be held responsible for the several hundred dollars of costs associated with fixing the other damage.

So now I have a new, marginally less ugly case, RMAs for some damaged components and a need to have the system reassembled while I’m at NAB. 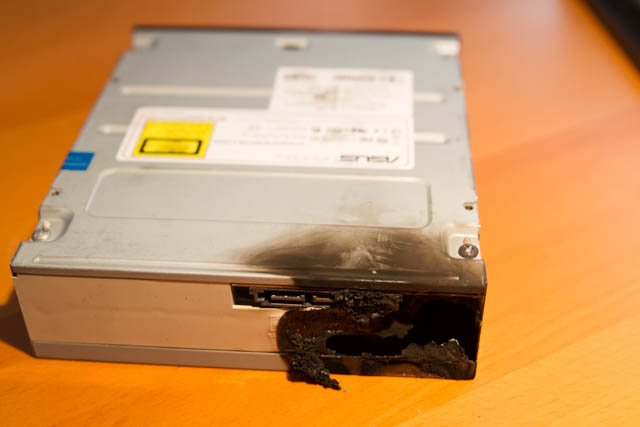 Given the choice today between an overpriced, underpowered Mac Pro, switching to Windows, or running Hackintosh, would I choose the last one again? Ask me again when I have more choices.

Let’s be clear: the situation with Apple and the Mac Pro right now is identical to what was going on with Final Cut Studio in the years between its final version and Final Cut X.

In other words, there’s no reason for Apple to be stealthy or mysterious with its plans, unless they are likely to upset a large set of Mac users. Other PC manufacturers are open with information on plans to reconfigure existing systems to accommodate the latest chipsets and components, and unlike them, Apple effectively has no competition for Mac OS platforms—other than ones like what I’m running here. If HP, Dell or Acer were to offer only similar systems for the same cost, it would exactly like saying, “we no longer wish to compete in this market.”

So, while I wouldn’t encourage anyone to build a Hackintosh on their own without a good deal of interest in doing so, nor would I encourage doing it without the support of someone who will work through all of the various quirks and actual failures that can occur with going down this road, I would suggest that the reason Apple hasn’t made it impossible for you to run a Hackintosh is that they don’t plan to offer a true alternative. History suggests that the Mac Pro is EOL (end-of-life) and that any alternative will fit into the vision of keeping powerful, complex hardware and software remote, and user systems lean, fully connected and as useful to consumers as professionals. Given the choice today between an overpriced, underpowered Mac Pro, switching to Windows, or running Hackintosh, would I choose the last one again? Ask me again when I have more choices.

What will you do?

(Note: Article updated 4/11 for extra and more commentary on components and comparisons to Mac Pro, based on comments from the builder of the system)