Here’s a recipe for Sony’s pro monitor division to create an awesome prosumer editing/grading monitor from a consumer Bravia.

Recently, I published an article which described why Miami-based PRODU.com chose to purchase a “foreign” Sony consumer Bravia HDTV set for video editing. That model surpassed the limitations of many segregated U.S. consumer models by allowing for all standard worldwide framerates, but it still isn’t as good as it could be for the mentioned applications. Ahead you’ll see the few but important software tweaks Sony should make to a Bravia to create an awesome prosumer 1080p editing/grading monitor.

Link to prior mentioned article

Here is a link to the prior article: Sony KDL–40BX420E: a low cost monitor for 1080p video editing at worldwide framerates from January 29th, 2013. 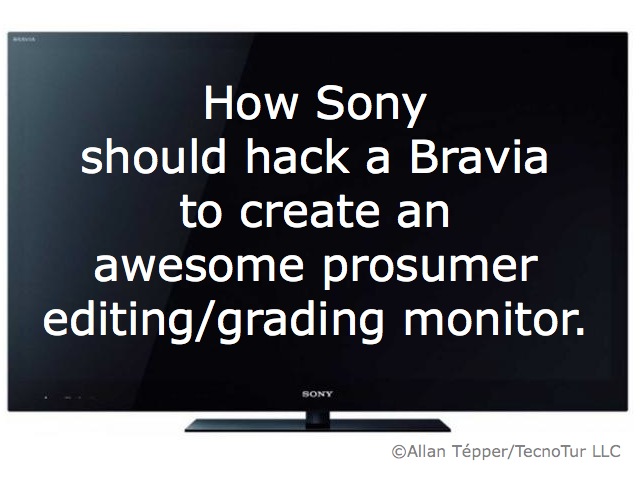 Details about source video information to be displayed on screen

It is vital for editors to be given accurate source video information on screen. Fortunately, the “foreign” non-segregated Bravia that I tested for the prior article accepts all standard worldwide framerates. I tried the following at PRODU.com over HDMI and they all worked fine:

(Even though I didn’t test for it, I believe that it will also accept 1080/50p and 1080/59.94p over HDMI.) That is great. However, the consumer Bravia did a terrible job of indicating the source framerates on screen:

In addition to using it to evaluate the picture, the video monitor should also tell the editor what spatial resolution and framerate is coming from the hardware interface. In the case of editing or grading software that can control the hardware interface directly, it serves as a reminder to the editor of the project/sequence settings. In the case of editing software that can’t currently control the hardware directly (i.e. Final Cut Pro X as of 10.0.7), the human editor must set it separately in an independent control panel. Having the on screen indication helps remind the editor if the hardware is properly matching the project/sequence settings (which is almost always desirable) or whether it is forcing a conversion (often done by mistake, occasionally done on purpose).

There should be a direct button on the monitor’s remote control to activate this on screen information perpetually (until pressed again). When not set to display perpetually, it should appear momentarily for eight seconds every time the source video spatial resolution or framerate changes, or when the user switches the input.

How to price the Bravia Pro

I believe that even if Sony’s professional monitor division doubled the official list price of the consumer Bravia models, they would still be very attractive, yet still be substantially lower in price than other current pro monitors.