“How much can I earn?” and “how much should I charge?” are essential questions videographers ask. Here are some answers. 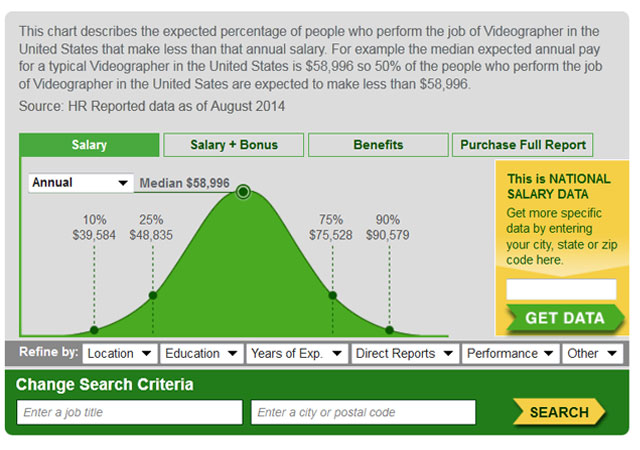 People new to the video industry tend to ask “how much does a videographer earn?”. Although it is difficult to answer in a way that satisfies the different expectations and adapts to different levels of experience, there is a place to find some clues, if you’re in the United States of America: the Bureau of Labor Statistics.

The wide variation in salaries is also reflected geographically, with California and New York being the areas where those professionals are better paid. Still, this does not mean that all film and video editors in those places can expect to receive higher wages than in other regions, because of the differences between industries. Also, freelance videographers will be paid differently, depending on the specific area they move, from TV to weddings. Still, looking at all the information available, will allow people to better define their own expectations. 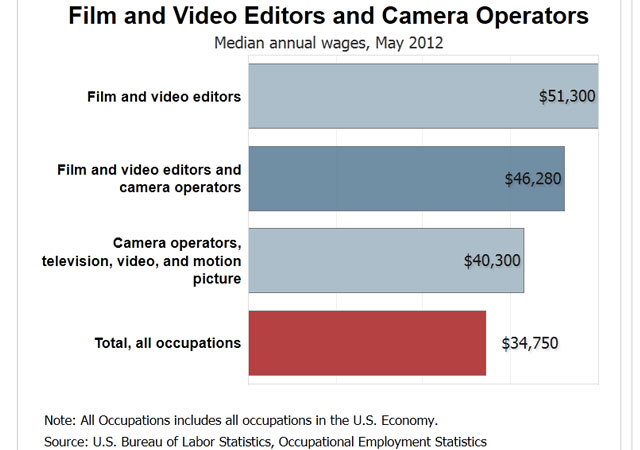 The Bureau of Labor Statistics numbers from 2012 indicate that “the median annual wage for film and video editors was $51,300 in May 2012. The median wage is the wage at which half the workers in an occupation earned more than that amount and half earned less. The lowest 10 percent earned less than $25,660, and the top 10 percent earned more than $119,250.” These numbers show that there was a rise of wages in 2013, although it was quite small at the lower end of the scale.

Work hours for these professionals also vary a lot, according  to the type of operator or editor, although most work full time. Those associated with the motion picture industry may have long, irregular hours, to finish projects, but will go through periods of unemployment until they’re hired for a new job, indicates the document from the Bureau of Labor Statistics. Employment of film and video editors and camera operators is projected to grow 3 percent until 2022, slower than the average for all occupations, which has a projected growth of 14 percent.

For more information about this subject, read the document Occupational Outlook Handbook, 2014-15 Edition, Film and Video Editors and Camera Operators,  from the Bureau of Labor Statistics, U.S. Department of Labor.

A place to visit if you want to know more about wages in the United States of America and Canada is salary.com, where you can get diverse information about multiple professions. The website offers a calculator that you can use to get more precise information about wages in different regions of both countries. Pay it a visit if you’re new to the profession, dream about becoming involved or are looking for a new job. 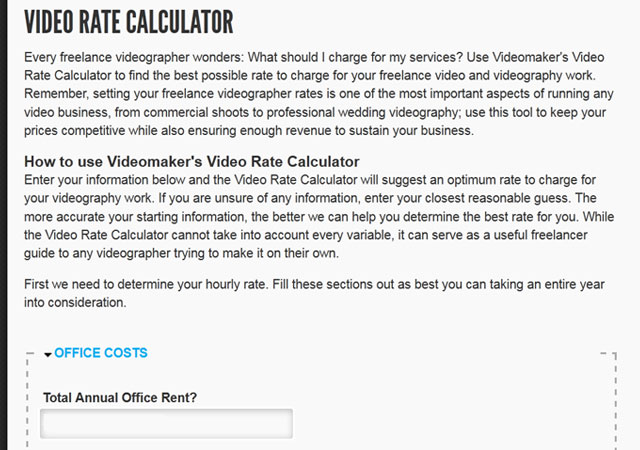 A second question many videographers make is “what should I charge for my services?” The Videomaker’s Video Rate Calculator is an online tool that can help freelance videographers to calculate how much to charge for their work, but it will also be an eye opener for all those that think to offer their services for free, when starting. Using the wizard will probably make they change their mind: once you include the cost of your gear and some extra expenses just to keep the business open, you understand that doing it for free, even to build experience, is wrong. Not only are you devaluating the market, you’re also making the path more difficult when you decide you need to make a living from your videography.

While it is not easy, sometimes, to define pricing for some of the tasks a freelance videographer does to assure he gets a job, it is important to set a price to your work, so when you’re asked what your rates are, you’ll be ready to show a number. The  Videomaker’s Video Rate Calculator is not the only solution or guide available to define your pricing,  but it will help you “to find the best possible rate to charge for your freelance video and videography work.” As the authors of the tool state in their website, “…setting your freelance videographer rates is one of the most important aspects of running any video business, from commercial shoots to professional wedding videography; use this tool to keep your prices competitive while also ensuring enough revenue to sustain your business.”