Most everyone in the post-production business has heard of HitFilm, the interesting little alternative non-linear editor and effects package from FX Home. In 2013 they completed a successful Kickstarter campaign to bring HitFilm to the Mac. Now they are making plug-ins for that NLE you might already be using that will cost you $499. And NAB 2014 is the perfect place to launch it.

Anamorphic lens flares in the HitFilm plugin package? Of course.

HitFilm is probably best know as a quirky but capable post-production package that leans heavily on effects. While the NLE side of HitFilm has many NLE necessities like full editing, trimming and audio mixing it’s the built-in effects that are most surprising. Particle effects, bullet hits and “genuine 3D compositing” are all things that make HitFilm a surprisingly capable package. There’s even a version of mocha for HitFilm so these guys are serious. HitFilm gave away their Express version for free during a promotional period (compare the different versions here) and I gave it a try. While the effects were cool there are some frustrating things in basic editorial so I didn’t make much use of it but I really don’t think I’m their target audience. A search through YouTube for HitFilm videos will show you some pretty impressive stuff. PVC's Kevin P. McAuliffe talked with HitFilm on his podcast late last year.

But now they are making plugs in. HitFilm plugins for (most) of your NLEs and effects applications. 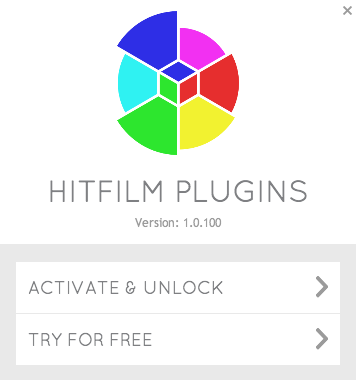 You'll log in once the HitFilm plugins are installed to unlock and track your licenses.

Here's a list of the effect categories in the package running in FCPX. Of course there are lights and flares!

What’s available in the HitFilm plugin package? All the usual effects categories you might expect. Blurs, glows, light rays, color correction. But there’s also some things you don’t find in many basic NLE plugin packages like Blood Spray, Fire, Rain on Glass and Blood Spray. Hey this is HitFilm, you’d be disappointed if there was not blood spray!

HitFilm apparently has some nice keying. They've included keyers in the plugin package as well.

The quality of the effects are quite nice. I have been playing with the beta version and performance is good though I haven’t used them extensively in any real world projects as of yet. They are GPU accelerated so the HitFilm plugins should take advantage of your fancy new Mac Pro. When I see the term “GPU accelerated” I always wonder if that means for render or for playback. I’m guessing render. Depending on the effects I was able to get some decent realtime playback in both FCPX and Adobe Premiere Pro CC. The license you get for $499 allows you to install on any two machines regardless of host package or operating system. Avid Media Composer users need not apply.

Here’s the bullet points from the HitFilm plugins announcement:

Particles & Simulation is where you'll find some of the effects HitFilm is known for.

Blood Spray offers up some cool particles and will animate nicely. It just might have limited usefulness.

You can't have HitFilm without gunfire … and the Gunfire effect has a while range of parameters to tweak to get that muzzle flash just right.

It might be tough to see in this image but the Rain On Glass effect is subtle but looks very real. Quite a nice effect when you need something like that.

HitFilm has a good following as their software has offered some amazing capability at a very affordable price. There will probably be some grumbling since the cost of the HitFilm plugins is more than the cost of the HitFilm Ultimate software package but chances are if you’re a pro in your FCPX, Adobe or Vegas world you probably won’t be learning or buying HitFilm Ultimate so $499 isn’t too much to pay for a good plugin package. Apparently HitFilm has written the plugins so any new effects innovations for their HitFilm Ultimate product will be able to easily port over to the plugins. How those future updates might be available for early purchasers no one knows but it is good to hear that’s possible. Plugins are an entirely new world for HitFilm so I’m sure it’ll take them some time to iron out all the details. NAB is the perfect time to launch so that’s what they are doing. This Announcing HitFilm Plugins community post has all the details as well as a growing list of comments with more information. You can also keep an eye in the HitFilm twitter and Facebook feeds for future announcements. Welcome to our world HitFilm folks!

Oh, and these more utilitarian effects might come in handy too. Not everything HitFilm is super flashy!