Since the beginning of the Winter Games, Hearst Television has been on site in Sochi delivering general coverage, as well as profiles of individual Team USA athletes. Hearst relies on a tapeless workflow and reporters in the newsroom and out in the field use Adobe Premiere Pro CC, part of Adobe Creative Cloud, to assemble and edit their stories.

The broadcaster moved its news operations to a file-based pipeline four years ago. As part of the transition, the broadcaster partnered with Adobe for its editing platform combined with a Bitcentral production system.

“We brought people from the stations into the transition process very early, so it worked out well and they were really pleased with it,” says Joe Addalia, director of technology projects for Hearst Television. “In our creative services group the team immediately wrapped their arms around the Adobe workflow. When the creative people start saying how much they love Adobe tools the news people hear them and start becoming champions too.”

Today, 19 of the 25 Hearst stations that produce news use Premiere Pro for day-to-day cutting of news stories. In the field crews are equipped with HP or Dell laptops running Premiere Pro and sometimes Prelude.

This month, the remote workflow is being put to the test, as a team of eight people, including a mix of photojournalists, reporters, producers, and a technical lead work on site in Sochi putting together human interest stories on athletes from the communities where Hearst broadcasts. The team is covering U.S. athletes in their local markets, with additional material delivered to Hearst’s 10 NBC affiliates. 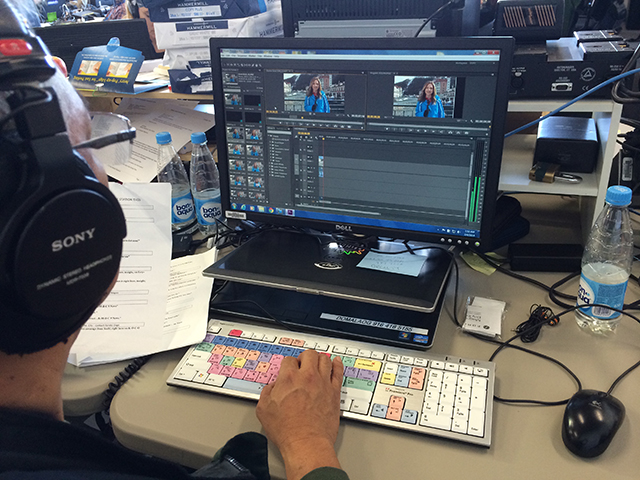 “It’s my job it is to make sure everyone’s laptop does what it is supposed to do in a foreign environment,” says Larry Vancini, Hearst’s technical lead on the project. “Once the crews and teams acquire the news and create a package, I get the finished packages back to the stations and handle any necessary embargoing. If something is shot only for NBC, and only for Louisville, the correct metadata must be present when that package is uploaded.”

Vancini uses Adobe Media Encoder to output the proper file formats, including presets he has created for standard definition and high definition H.264. Of the 19 stations that have Premiere Pro, 17 also use Bitcentral as their production system. Metadata is entered within Bitcentral whenever content is uploaded. Once the material is ready, the network of Bitcentral stations are alerted that the content is available and the remaining stations have access to the content via a web browser.

In order to handle the amount of content that the Hearst team is tasked with creating in Sochi, many stories are prewritten. This helps the team organize their time well, so they are always ready to jump on stories that develop in the moment. Reporters may use previously shot content of local athletes and edit that together with fresh Sochi footage. Producers laying out the plans have a seven hour time difference in their favor so they can work a day ahead and get direct feedback from the stations, when needed.

While reporters don’t have the luxury of working a story right until the moment it goes to air, in Sochi only one news package each day is date and time sensitive. All other stories can be completed and uploaded a day ahead of time, so the stations will have plenty of time to bring them to air. Despite distance and bandwidth constraints, the team is excited to be working on site at the games and delivering high-quality content back to local stations hungry for coverage.

“We’ve dabbled with the system since the election and also used it for localized coverage of the Zimmerman trial,” says Vancini. “In that case we were in the same time zone and all content was edited locally with Premiere Pro and encoded using Media Encoder. We pushed the files back on a high speed pipe and it worked flawlessly. We’ve taken this model and applied it to our Sochi workflow and it’s going well.”