Armed with just his vision and the Creative Cloud applications, HaZ Dulull made the scifi short Project Kronos in 2013. Today he is writing and directing Hollywood feature films.

Armed with just his vision and the Creative Cloud applications, HaZ Dulull made the scifi short Project Kronos in 2013. Today he is writing and directing Hollywood feature films.

Soon after its release, Project Kronos was an Internet hit on YouTube and Vimeo. Viewers loved the gritty documentary feel of the 15-minute short created on a budget of just £3000 by Hasraf “HaZ” Dulull entirely with Adobe Creative Cloud applications, including Adobe Premiere Pro, After Effects, and Photoshop. Hollywood loved it, too. So much so, that HaZ was able to win his first feature film deal for a full-length version of the space exploration drama. 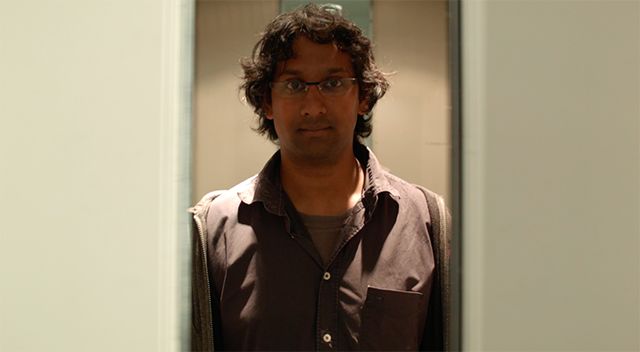 Hollywood is a long way from the buzzing streets of central London where HaZ grew up. As a boy, his interest in cinema was first piqued by VHS videos of Blade Runner and Alien. Fascinated by the special effects, the youngster carefully reviewed scenes, trying to discern how they were created. Meanwhile in school he started playing around with an early version of the Paint application. “The school computers wouldn’t let you save files, so day after day I would create the same image, improving it as I went along,” he recalls. “I got pretty good at pushing pixels that way.”

At 16 he got his first computer and was soon a keen gamer. His interest in pursuing a career in game design led him to choose Computer Science, Technology, and Design for his A Level exam subjects. As part of his schoolwork, he created and animated a film using 4-bit images. From there HaZ went on to study media communications and for his dissertation on video games he created a simple horror game.

From game cinematics to cinema
That helped him land his first video game job creating cinematics, the short films that serve as introductions to the video game narrative and as “cut scenes” between levels. “By now I was working with the first wave of digital tools, including Alias Wavefront for animation, Photoshop for painting, Combustion for compositing, and Avid for editing,” says HaZ.

“After a few years, I asked myself: ‘Why am I doing this?’ Why not work on actual films,” he continues. “So I got my first film job at the Moving Picture Company in London.” Starting in 2003, he worked his way up from compositor to lead compositor, finally becoming VFX supervisor on broadcast series such as America: The Story of US (History Channel) and Planet Dinosaurs (BBC), both of which earned him award nominations in 2011.

As a VFX supervisor he was soon working shoulder to shoulder with directors. “That became my film school,” he says. “I was helping filmmakers plan their productions in a way that avoided problems in postproduction. This didn’t just teach me about the process of filmmaking, it deepened my understanding of storytelling and how each aspect of a film, if done right, supports the larger narrative.”

The role of VFX supervisor is an interesting one and tells us a lot about the evolution of filmmaking today. Originally, the VFX supervisor was brought on set to bridge the gap between filming and post production. They ensured that shots were captured correctly for efficient postproduction and high-quality visual effects. Sometimes VFX supervisors even directed segments themselves. But the role has grown as the place of visual effects in filmmaking has matured. “As a VFX supervisor, I’m working with writers actors, directors, producers, executives,” says HaZ. “We’ve become very influential in the storytelling process and we’re usually brought in now during development, before the script is even green lit.”

Pitching feature films in Hollywood
Meanwhile, HaZ himself was also evolving and the idea for Project Kronos was born. “Project Kronos was the right thing at the right time,” he explains. “Gravity was hitting theaters and Interstellar was in production. Space stories were hot.” Project Kronos was picked up by Armory Films and Benderspink to turn into a full-length drama with HaZ attached to write and direct.All of a sudden, he was being asked to pitch ideas for other films.

“Now I go into the meetings as a director and a writer,” he says, “and I don’t just bring a script with story boards. I cut a short teaser of the film to show the studio execs what the film will look like. And I’m not just showing them the story, I’m showing them how it can be made.”

The approach has worked. In short order HaZ had three films in development with a fourth in the works. “It really helps that I can knock out the videos fast,” he explains. “Once I even cut a pitch trailer on the plane, on the way to LA. It’s so easy now: boot up the laptop, open the Creative Cloud apps and just get to work.”

The process itself is not new to him, just the ease with which he can do it. “I’ve been doing proof of concept stuff for a long time, but it used to be with disconnected tools,” he says. “With Creative Cloud I don’t have to deal with that any more. I just bring everything into Premiere Pro and then connect the pieces. It makes it so much easier to sell an idea when you can show it already visualized.”

Building pitch trailers with Creative Cloud
One of the new projects is called Sync. Unlike Project Kronos, which is styled like a documentary, Sync is a sci-fi thriller. “I wanted to show I could create the kinds of action films that studios are often looking for from young first-time filmmakers,” he says.

He even created a kind of pre-teaser to show potential collaborators what he wanted to make, including grading with SpeedGrade, to create atmosphere, and VFX created in Photoshop and After Effects. “That worked,” he smiles. “My test shots generated interest and I found my crew and actors just by showing it around.”

While shooting the Sync teaser, HaZ and his team were already doing rough assembly, which was easy, since Premiere Pro supports the native files right out of the camera. From there the short film was built stem-to-stern in Creative Cloud. “Adobe isn’t just creating tools, they’re creating workflows,” says HaZ. He is proud of this project, which he feels includes elements of Blade Runner, one of his first movie loves.

I.R.I.S, a third feature film project, combines the documentary storytelling style of Project Kronos with the sci-fi thriller genre of Sync. In this story, the globe is surrounded by miniature drones which, using sophisticated artificial intelligence, monitor and police human activity.

I.R.I.S. was created using the same workflowas Project Kronos and Sync. As with those shorts, HaZ made extensive use of After Effects for compositing CG elements into the live action, as well as augmenting stock footage. HaZ created I.R.I.S. before Sync but it was released afterwards. “It was a project I developed with another production company in LA to pitch as a feature film,” explains HaZ. “We never intended to release this one as a short film, but after all the buzz around Sync it made sense to make this public, too.

“I asked my DP on I.R.I.S. if he could find some guys who could help out as marines in the film. When I turned up on set these guys were fully kitted out with enough weaponry to start a small war – all replicas of course! They were awesome to work with and totally loved films like Aliens, so directing them was a blast. Naturally, I used them again on Sync for much bigger action scenes.”

A playground for developing ideas
As all of these short film projects show, Creative Cloud gives HaZ a digital playground for developing ideas. The result in each case is not just a story idea, but clear ideas for how to make it efficiently and cost-effectively. For example, HaZ has made extensive use of Adobe Audition to map out audio for his projects. “Sound studio time is really expensive, so it helps a lot if I can show exactly how I want the audio to be done, and the audio people end up using many of the original sound elements I created,” says HaZ. “And I’m not even an audio guy!”

The design tools have also proven useful in fleshing out concepts. “For one project I was asked how I thought it could be marketed, so I grabbed some stills and designed a poster for the film,” he says. “TypeKit is a lifesaver for me, too – not just for making posters, but for titling and design elements within the films. I also used the Assets Library to create graphics in Sync. I don’t want to be thinking about tools when I’m doing my work. Everything I need I already have in Creative Cloud.”

After a year of polishing the script, HaZ is now gearing up for his feature film directorial debut on Project Kronos, which will go into production in 2015. While this will bring new experiences, he feels very much at home in the process. “I don’t need to worry about post, or editorial, because I know I have all the tools to get the job done.”

HaZ is represented by manager Scott Glassgold of IAM Entertainment