Side-by-side comparison of the Hero2 and Hero3 cameras. 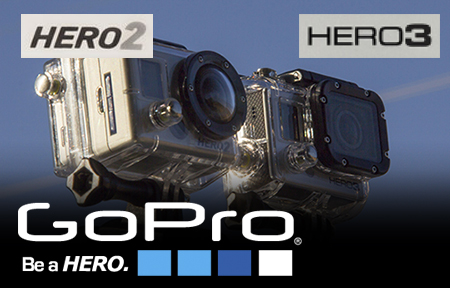 This is the second part of my hands-on review of the new GoPro Hero3 camera, where I’ve managed a series of side-by-side tests with the Hero2 camera in various scenarios – from multiple frame rates, resolutions and lighting conditions, in both video/still shots, raw and processed with the CineForm Studio software.

If you haven’t already seen Part 1 of my hands-on review of the GoPro Hero3 camera, please check it out before continuing. I’ve not going to cover the same materials or give many specs of the new Hero3 camera here – only provide examples of my comparison testing witht he Hero2* and the resulting info.
*Note that the Hero2 camera I’ve used in these comparisons were with the newly-updated firmware that I shared last month.

The Showdown: GoPro Hero2 vs Hero3

At first glance, the physical differences are obvious, especially the thinner profile and larger buttons (see Hands-on with the GoPro Hero3: part 1 more for info & specs). But the real differences are what’s inside the Hero3 – the new sensor, glass lens (Hero3 Black Edition) and higher resolution/frame rates sets it apart as a professional addition to your production kit.

I did some tests with individual mounts but primarily most were done with a handheld frame (which was also mounted on a tripod at times). In the shot below, you can see the difference in the LCD screens of each GoPro – the Hero3 on the left and the Hero2 on the right:

My first test the day I got home with my new Hero3 was to do a straight side-by-side comparison with roof mounted cameras on a local stretch of road to see how things like resolution, auto white balance, dynamic range and lens distortion looked between the two.

Here are a few stills from the comparison (all test results are raw & unprocessed and straight out of the cameras). This test was with both cameras set with Protune=ON, AWB=ON, 29.97fps, 1080p (stills resized to 600px wide for posting on PVC)

Notice the increased resolution in details and wider dynamic range in the sky and the foreground elements. The Hero2 shows a warmer tone and more color saturation in most cases, but also more contrast and less dynamic range and resolution.

Also quite noticeable is the improvement on the barrel distortion of the lens. I have the Hero3 Black Edition which has a glass lens so I have not been able to compare with the Hero3 Silver or White Edition cameras – but a colleague has done measurements for distortion with the Black and Silver and said the FOV of the optics are nearly identical in both cameras.

I took some footage one day/evening around downtown Berkeley and got a range of examples with both the Hero2 & Hero3 mounted side-by-side on a handheld rig. The results were actually surprising, since it was also the first time I really put the Hero2 to the test after updating the firmware, which produced a wider dynamic range than previously, but still, no comparison to the Hero3. I shot afternoon with diverse building shadows and hot reflections, twilight with a mix of ambient light and artificial lights and later at night with all artificial lights, where the GoPro has been notoriously noisy. The results are still not at DSLR level, of course, but definitely “usable” if some filtering is applied.

Here are a few stills from the comparison (all test results are raw & unprocessed and straight out of the cameras). This test was with both cameras set with Protune=ON, AWB=ON, 29.97fps, 1080p (stills resized to 600px wide for posting on PVC)

Even though the GoPro Hero3 has only 1MP increase over the Hero2 (12MP over 11MP), the still image capture is remarkably improved – especially in noise and compression, as well as improved dynamic range. I did some side-by side comparison tests and blew up a few details to show how the compression artifacts are very different in each of camera’s images – which lends me to think that not only is the sensor different, but somehow they’ve managed to change the JPG compression algorithm to provide a smoother image with less compression damage and less noise.

Below are some of my results. Both shot in wide mode at the highest setting with AWB – straight from the camera and unfiltered/processed and only scaled for publishing online and cropped for detail shots.
Hero2 = 11MP 3840×2880 72ppi
Hero3 = 12MP 4000×3000 72ppi

Another test really shows the difference in detail, less noise, more dynamic range and less contrast between the Hero2 and Hero3:

My final comparison test was to see how the various resolutions and framerates differed between the two cameras. I recall how excited I was when the GoPro Hero2 came out and touted a 120fps mode at WVGA resolution (848×480) which could be slowed-down to about 24fps for incredible slo-motion effects. However, the Hero3 now provides 240fps at the same WVGA resolution and offers tremendous slo-mo playback! It will also provide 120fps recording @ 720p and 60fps @ 1080p which is truly remarkable for a camera of this size and price range!

Below is a test video I compiled showing the comparisons between the two cameras. The first portion shows 60fps played back at 30fps. The second segment shows 4 frames of both cameras shooting at real-time on the left and then slowed-down to 30fps on the right. Notice how clean the Hero3’s 240fps slowed down to 30fps plays back as the wheels tuen on the passing car, which was traveling about 35mph at the time of shooting.