Why you might need an UltraStudio Mini Monitor, what’s good, and what I’d improve.

Although I have covered Blackmagic’s new US$145 UltraStudio Mini Monitor interface in prior articles (links ahead), I have now become even more familiar with it since the company sent me a sample unit, together with a Thunderbolt cable. Ahead I’ll cover why you might need one, everything I liked, and the few details I’d like improved.

Prior articles where I have covered the UltraStudio Mini Monitor

In addition to those two, I also covered it less specifically in Sony KDL–40BX420E: a low cost monitor for 1080p video editing at worldwide framerates from January 29, 2013.

Amazing reduction of size and cost of post-production systems

Like AJA’s T-TAP, Blackmagic’s UltraStudio Mini Monitor amazes me because of how compact it is (palm-sized), the fact that it is bus-powered (“Look Ma, no power cable!”) and how inexpensive it is compared to what would have been required just a few years ago. In fact, at US$145 list price, the UltraStudio Mini Monitor costs about 91% less than a device many Blackmagic interface users purchased about five years ago, like a US$1595 MultiBridge Pro. Of course, the demands have changed for other reasons. Five years ago, most users with whom I consulted needed to capture both from analog videotape sources (i.e. Betacam SP tape) and SDI sources (i.e. Digital Betacam, D5, D9, DVCPRO HD, HDCAM). Nowadays, almost all of my consulting clients are using some type of tapeless acquisition, so they are able to purchase an output-only audio/video interface (saving US$1450 as in the example shown above), and (more importantly), they are also saving thousands of dollars (or euros or pounds, etc.) by not having to purchase any feeder tape deck.

Who can use an UltraStudio Mini Monitor?

Anyone who needs to build an editing/grading system based upon a Thunderbolt-powered computer and needs to see the end-result of her/his work —up to 1080p29.97 (or 1080i59.94)— in real time full-screen on an HDMI or SDI capable monitor (and who does not need to capture video from analog or SDI sources) is a candidate for the UltraStudio Mini Monitor. Of course, serious graders should carefully read my recent article UltraStudio Mini Monitor works with DaVinci Resolve, but should you use it for serious grading?, and anyone who owns (or is planning to own) the current HP DreamColor monitor should realize that for that particular monitor, a US$495 “Band-Aid” is still required to make the UltraStudio Mini Monitor work properly, at least as of publication time of this article. See my May 2012 article Blackmagic: We’re ready to remove the Band-Aid! for details.

What about the T-TAP from AJA? 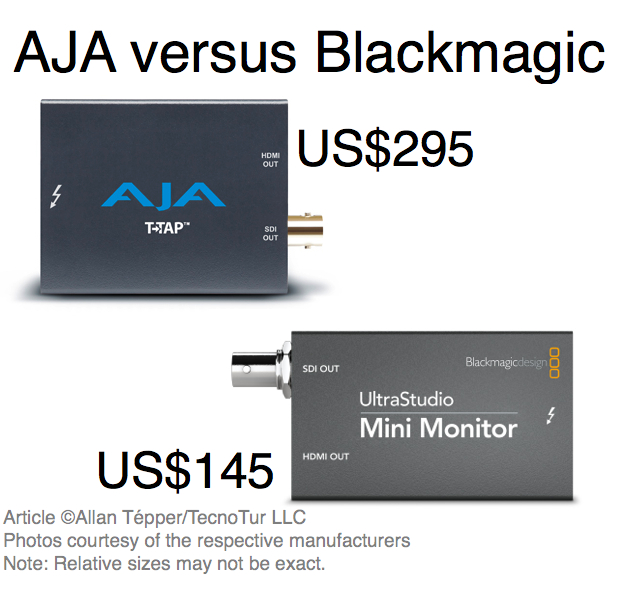 As I indicated in this article, the US$295 T-TAP from AJA is great. However, it costs more than double the price of the UltraStudio Mini Monitor, and does not work with DaVinci Resolve. I love AJA, and I love palindromic names, words, sentences, and numbers. However, the T-TAP makes sense only if you are absolutely positive that you will never, ever need to use DaVinci Resolve and are willing to pay more than double. One advantage that the T-TAP has over the UltraStudio Mini Monitor is that it can work directly with a DreamColor monitor without a US$495 “Band-Aid”. However, if you are going to purchase or use a DreamColor monitor, it is very likely that you’ll want to use DaVinci Resolve, at least the light (free) version. The other unique advantage that the T-TAP offers is its 2K capability. However, so far no one has ever asked me about monitoring 2K: only 720p, 1080p, and (very seldom so far) 4K.

Why can’t I just connect my video monitor directly to my computer?

As covered in prior articles, although the Mac now properly covers standard spatial resolutions when connecting an external HD video monitor (i.e. 720p and 1080p), as of OS 10,8.2, the Mac still doesn’t handle non-integer framerates like 23.976 or 29.97 on its native external video outputs. When connected to a monitor that’s capable, OS 10.8.2 currently handles 24, 25 (over 50), 30 (over 60), 50, and 60, but is missing 23.976, 29.97, and 59.94. Even home theatre forums have posts of people who play 23.976 films on a Mac to an HDTV set and have hiccups since once in a while the system stutters to catch up with the difference between 23.976 and 24.000. Some people have hacked their Mac with SwitchResX to add the missing framerates, but some have had trouble with it. To be safe, if you edit non-integer projects like 23.976, 29.97, and/or 59.94, you should use a professional interface, at least until Apple begins supporting these framerates in OS X (if they ever do). If you exclusively edit projects at 24.000p, 25p, 30.000p (quite unusual), and/or 60.000p (extremely unusual) and don’t use a DreamColor monitor (whose DreamColor Engine demands digital RGB, which many Macs won’t deliver natively except when forced to DVI, which has its own limitations since it only works at 60.000 Hz), then you may likely get away without the pro interface. Otherwise, spend the US$145 (or more if you need more). 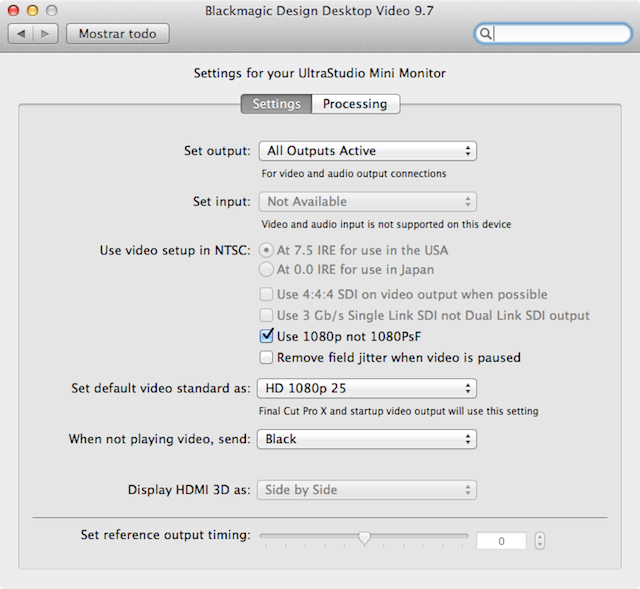 I like the fact that Blackmagic gracefully allows the human editor to cancel PsF via a simple checkbox labeled Use 1080p not 1080PsF in order to send pure progressive to the connected monitor. If you are editing with a 1080p project/timeline/sequence, the best way to monitor it is at 1080p at the same native framerate, unless your monitor won’t accept it. When used with Final Cut Pro X, the spatial resolution and framerate setting in the Blackmagic Design Desktop Video control panel must be set by the human editor manually before launching FCP X. See details about that in my upcoming article Why does FCP X still deal with pro i/o interfaces haphazardly?

Caution when choosing a Thunderbolt computer and storage

Since the UltraStudio Mini Monitor is an end-point, you should either have a computer with at least two Thunderbolt ports, or you should choose a Thunderbolt drive or array with looping (daisy-chaining)… or both.