For the first time in decades, on August 21, a total solar eclipse will pass over the United States, from West to East. Time to get the gear ready to capture stills and video of the celestial event. 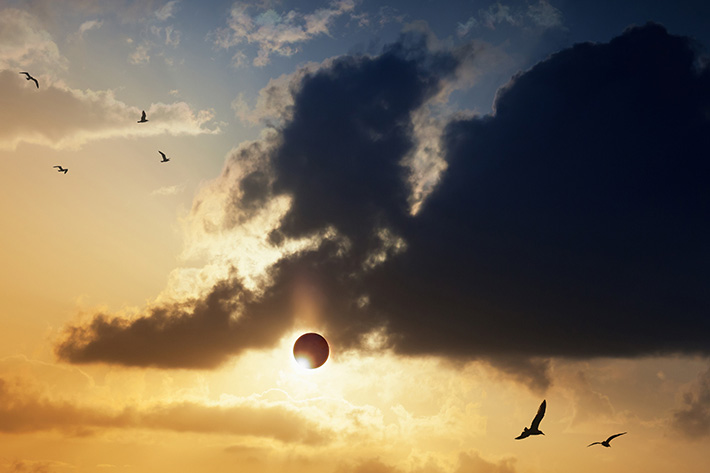 Photographing an eclipse is an exciting idea, but don’t stop there. Modern cameras offer accessible ways to create video or time-lapses, so why stop at single photographs? This is your guide to try new techniques during a total eclipse.

It’s an exciting experience to capture images of a solar eclipse, but remember to FOLLOW THE SAFETY RULES so as not to spoil the moment. Yes, you do have to protect your eyes, but you also need to protect your camera’s sensor, which can be damaged if exposed directly to the bright light from the Sun. The information needed to safely watch or capture images of an eclipse is everywhere, as multiple websites were created, in recent months, explaining everything, from the best locations to the best gear and techniques.  Try to “google” after the term “Total Eclipse 2017” and you’ll find so much information that it would take you longer than the days left before the eclipse happens to read all the articles and suggestions.

We’ve created this guide to point you in the right direction, regarding video and photography, and SAFETY, and also to give you some ideas of what you can try, if you feel challenged to go for something different. The only limit, in fact, is your imagination. With the tools available today, you can do more than capture simple stills. Time-lapses of the event are something to explore, and some modern cameras make it easy to achieve results. If you’ve never tried it, you have the following days to learn all there is to learn about the technique. 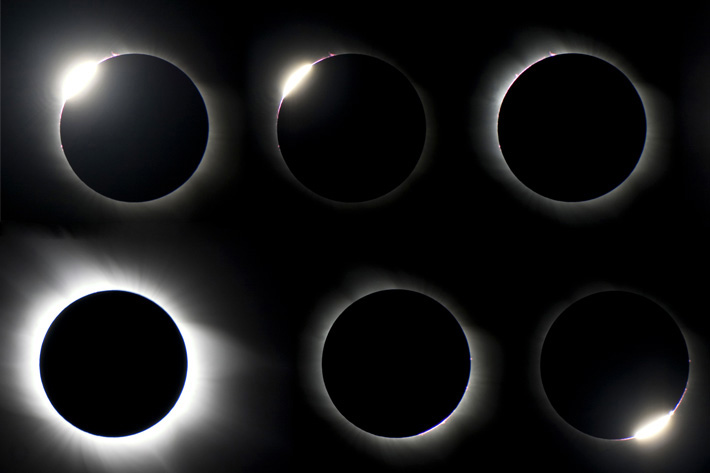 A compact camera will be enough to create photos you’ll remember, but you really need a camera with at least a 300mm focal length (or equivalent) to get decent images of the eclipse itself. But don’t stop there: if you’ve a compact camera and a bigger model, DSLR or mirrorless, you can – should? – use both to create different types of imagery during the eclipse. Use the camera with the longer lens for detailed images of the celestial event, and the other to capture the general atmosphere, the changes of light during the whole eclipse, and the reactions of people watching it.

The advice above also applies to video: if you’ve two cameras use one for the eclipse itself the other for the general atmosphere. If you want both photography and video, the compact camera will be enough for some stills while the one with the longer lens is pointed at the Sun. If you’ve multiple cameras… then just cover every different angle from this unique moment in History. 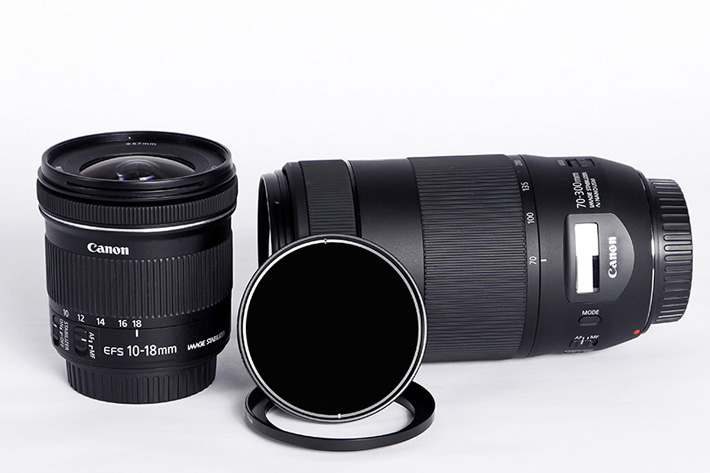 We published last April one article, under the title, Canon kits for the total solar eclipse, suggesting six “Eclipse Kits”  created by Canon for the moment. The kits pack together popular Canon cameras and lenses with a HOYA PRO ND100000 67mm Filter and a 58-67mm Stepping Ring (PowerShot SX60 HS kit does not include stepping ring)  to help protect photographers’ eyes when looking through the viewfinder as well as the camera’s image sensor.

Neutral Density filters are an essential tool to use for this type of photography/videography. If you do not own one, then it is time to go out and get, not one, but a set of three – usually 3x, 6x and 9x, because they are very useful for other subjects too and in this case you’ll need to stack them. Don’t buy cheap Neutral Density filters, though, as they will, generally, introduce a colour cast that will make you give up using them. Also remember that colour casts get worse with stronger filters, and you’ll have no doubt it is better to invest in good quality NDs. I would advise Breakthrough Photography ND filters, which I use, and are the best available, according to well-known photographers, as Art Wolfe. Manfrotto ND filters are also a brand you’ll not go wrong buying, from my experience. I’ve used them stacked and the final image still keeps close to neutral in terms of colour.

Whatever you do, remember that if you do not have a ND filter giving you something like 16 stops less light, you need to use a solar filter, a special filter for looking at the sun, either with glasses or through your camera’s lens. This has to be used throughout most of the eclipse, if you want to get shots of the Moon covering the Sun and moving way. During totality, it is possible to remove any filters to get the corona, but remember to get the filter back on when the Moon starts to move away from the Sun again. SAFETY first is the rule, and don’t forget to enjoy the experience. Photography should come second.

With this year’s eclipse approaching, people became interested in the techniques to capture both stills and video, so the search for websites offering information has expanded in recent months. Some companies, like Canon or Zeiss, even created specific pages explaining everything there is to know about capturing the event. So, there is no need to repeat here techniques and suggestions, as you’ll find all the tips needed on those pages, and many others.

On the Canon Eclipse Blog ”A Total Guide to Totality”, the company offers tips allowing photographers to document the moment the Moon fully blocks the light from the Sun, keeping it away from view for over two minutes to a large portion of the country. This eclipse is the first one to race across the entire country in 99 years, and because of that – and the technology allowing us – it is, probably, going  to be the most photographed total solar eclipse to date.

The blog, co-authored by Canon Explorer of Light Ken Sklute and photographer Dave Henry,  features a series of ongoing posts with helpful guidelines, images and videos that teach photographers of all skill levels how to capture the total solar eclipse including tips that may help protect your eyes and camera’s lenses and sensor.  Because this is the type of event that attracts so much attention, Canon decided to take the occasion boldly, and created the Eclipse Megamovie Project,  the first-of- its-kind citizen science project.

The Eclipse Megamovie Project will gather images of the 2017 total solar eclipse from over 1,000 volunteer photographers and amateur astronomers, as well as many more members of the general public. Canon will then stitch these media assets together to create an expanded and continuous view of the total eclipse as it crosses the United States. The resulting dataset will be open to the scientific community and general public for future research. According to the organizers, the Eclipse Megamovie Project will add a new dimension to our studies of the Sun’s faint outer atmosphere – the corona. By stitching together thousands of images taken along the path of the 2017 total solar eclipse, we will have a unique treasure-trove of information on how the corona changes over time.

ZEISS also created a Eclipse 2017 microsite, which offers lots of information about the eclipse and ways to watch and capture it. As ZEISS puts it, “On August 21, 2017, a total solar eclipse will pass over the United States, beginning in the northwest and continuing diagonally toward the southeast. Eclipse-chasers from across the world will converge on key viewing locations across the US to witness the phenomenon. To aid enthusiasts in better understanding and witnessing the celestial event, precision optics leader ZEISS has launched a one-stop, dedicated solar eclipse microsite.”

Since early August, 2017,  the website eclipse2017.zeiss.com is one possible destination to anyone interested in the eclipse, and trying to find out how to best enjoy this once-in-a-lifetime celestial event. According to Dr. Mike Morris, OD, a self-proclaimed eclipse chaser, “Most people will never witness a total eclipse of the sun. Unless you’re very lucky, it takes a lot of planning and travel, often at inconvenient times and to remote places, to experience this glimpse of history.” And with a history of its own that spans nearly 175 years, ZEISS knows a little something about historical events, innovations in optics, and vision safety.

The ZEISS Eclipse 2017 microsite is intended to aid eye care professionals, photographers, space buffs, and eclipse fans in experiencing this unique event, either in person or online. It features tips on safely viewing the eclipse, articles from Dr. Morris on eclipse chasing and creating a homemade eclipse projector, instructions for entering the ZEISS eclipse photo contest on Instagram, links to valuable resources, and much more.

In honor of this once-in-a-lifetime solar eclipse, ZEISS announces the #ZEISSEclipse2017 photo contest! Open to all US residents, the contest aims to challenge people to show their great eclipse photos. ZEISS  says that “whether it’s your camera, or viewing rig, or your awesome shot of the sun’s corona as the moon passes in front of it, we want to share it!“

Besides being the most photographed total solar eclipse to date, this eclipse will also be, no doubt, the most broadcasted eclipse, through different media. NASA, the US federal government branch for aeronautics and space administration, will be broadcasting the eclipse live from different locations – outer space, balloons and from the ground, and that video stream will be distributed in different ways, making for a unique experience of what is also called The Great American Eclipse.