With Greenscreen, 80 percent of your post budget is lost on the set…learn how to get it back!

I pulled my first Greenscreen in 1996 working on “Star Wars: Episode 1” pre-viz. The footage was rough (pre-vis handycam footage) and the After Effects Color Difference Key was a complete mystery. Now, the Pixel Corps, we shoot an average of two hours of greenscreen footage a day, mostly 4:4:4 uncompressed. While the tools have progressed significantly, the process itself, and the rules, have changed surprisingly little.

In this article, I’ll cover the major issues you need to solve when shooting greenscreen footage. There will be future installments to discuss theory and keying technique. I will argue about 90% of the professionals out there do not use most of the information I will lay out here… and it makes their process much more difficult. I will say, everything we do in the Pixel Corps is designed to lower costs and accelerate delivery speed while constantly improving quality. We’re not particular to be particular. We do everything because it shaves time or improves quality.

While some people still use a green cloth and a few shop lights, they are saving money on the front end only to pay for it later, in time and quality, on the back end. This “future” payment can often dwarf the cost of the original shoot. While you can’t always get a great screen, most bad screens that we see are shot as talking heads…where there is absolutely no excuse to shoot a rough backing. In reality, you really don’t need a super expensive set-up, but a few elements make a difference. The thing to realize is… 80% of the quality of your key happens on-set. If you shoot garbage on set, you will spend countless hours just to survive the composite. If you shoot clean, well lit, plates on set- you will key quickly and easily.

Let’s address Greenbacking first (this is the Japanese Term for “Greenscreen” and in some ways, more accurate…as the Japanese often are). I call it “Green” not “Blue” because, well, you should almost never use a bluescreen. Kermit the frog may thought it wasn’t easy being green…he obviously wasn’t a compositor. Blue is the most disrespected, beaten and shortchanged channel in the digital pipeline. When compression hits…it hits the blue record the hardest. It leaves it blocky, grainy and chattering. You can feel bad for the Blue Record but you shouldn’t use it for your keying operations…even out of sympathy. Green, on the other hand, is usually crisp and clean because it actually gets most of the YUV signal in the conversion. Compression will still affect it but not nearly at the level that it affects the Blue.

So, we’ve decided on green, but what kind of green? You can get Rosco, Composite Components, Wescott, or the green paper at the Pharmacy. At the Pixel Corps, we only use Composite Component’s “Digital Green” (and no, we don’t get paid to say that). On paper, it shouldn’t really work as well as Rosco…but it does by a significant margin. I would not suggest Wescott pop-open screens or anything that feels like corduroy or cloth. Both of these will suffer from reflectance issues and patterns. They are cheaper, and there’s a good reason. If you love Roto and lots of extra hours working on the keys…knock yourself out. But I’m lazy and prefer to make the capture process as clean as possible.

Once you’ve chosen the screen flavor, you need to decide the screen type. The best solution, when you can implement it, is a smooth green painted wall. It’s the easiest to light evenly (which is 60% of your challenge). If you can’t muster a green wall, Lycra is the next best choice. Again Composite Components Green stretched tight is your best, though not cheapest, bet. You can go out and buy a fancy frame for it but we often use 1″ PVC pipe that’s 1.5 feet longer and wider than the greenscreen. The nice thing about PVC is that you can get in any city…making it easier to travel. If you are going to go with paint, plan on 4-5 coats. You need it to be really green and really consistent. We also don’t “touch-up screens” we repaint the wall every month or two and we really talk care of it. It’s expensive, but not as expensive as “fixing it in post.” 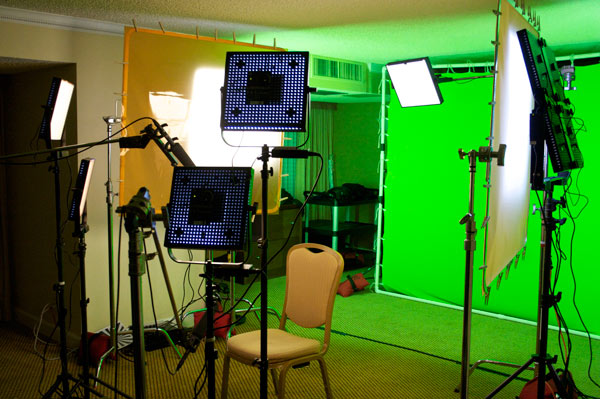 Our lycra screen hitched to PVC

OK, now we need to light our screen…

Generally, what you are looking for is a large, diffuse, light source that will wash over the screen evenly. You can try to use a little Lowell Tota but it will be very hard to get what you want. We use 4′ Kinos. You will need either a 2 bank or a 4 bank of lights, depending on the type of lights you use in the kinos and the strength of your lights in the foreground. 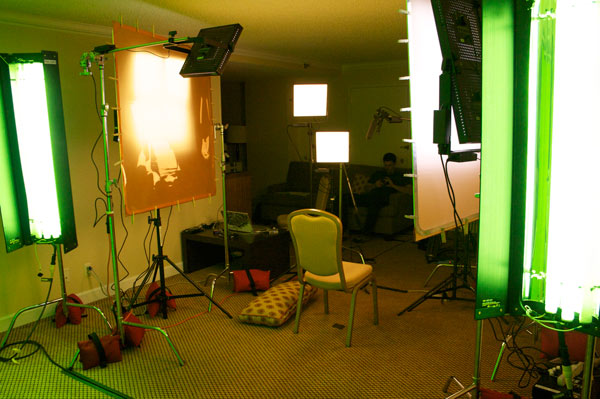 Here you can see the Green Kinos

Interestingly enough, it’s really the bulbs that matter. For a short project, you can get shop light fixtures at Walmart for $8.89 and add good bulbs (Kinoflos) to get something that works…for a period of time. What you pay for in a Kinoflo fixture is the ballast…the power supply. A Kinoflo ballast is consistent, flexible and has a high cycle rate (meaning you will never see it flicker). We use kinos because A) we need the features and B) we’d have to charge less if the clients saw Walmart fixtures. That said, I’ve been to many small studios in the US and Africa that employ the Walmart approach with a great deal of success.

We use green kino bulbs. This is sometimes called “green on green” meaning green lights on a green screen. The result is a very, very pure green that is easier to key. In the “olden days” (5 years ago), the methods of removing the green spill was primitive- making this technique less usable. But with plug-ins like Keylight, dvMatte, and Conduit (disclaimer…my company, dvGarage, makes dvMatte and Conduit), despilling is much less onerous than it was in the past. You can use either daylight (56k) or indoor (32k) bulbs but you need to figure out what color your screen is balanced for. Rosco paints are generally balanced for 32k bulbs and Composite Components are often balanced for 56k. If the screen looks a little yellow, you want 56k bulbs. If it looks a little blue, you want 32k bulbs. This is just a rule of thumb. The best way to check this is through scopes, we’ll get to that. If you are using green bulbs…it will always look really green.

Of course, right now, you are probably thinking, “This guy is FULL of IT, If I use green lights, my foreground subject will be all green!” You would be right…if you lit the screen and the subject with the same lights…something we avoid 90% of the time. To make all of this work, you need to A) have proper separation of the subject and the screen (we generally have 10-15 feet between subject and back wall) and B) separate lighting for the subject. The separation of the subject from the backing greatly reduces green lightwrap (often referred to as Green Spill) because less light from above and below are striking the shoulders and legs from oblique angles. The separate lighting eliminates subject shadows on the backing and allows you to balance the lighting for both the subject and the screen independent of each other.

How you light your subject is up to you. Don’t worry about doing the old-fashion Magenta rim light…we don’t need that anymore. Just light the subject as you would for the given scene. One thing that is important, however, is to make sure that both your foreground and green backing are well lit. Often, crews get one right and the other wrong. Looking through the scopes (and you should always be using scopes on a greenscreen stage), you green level in the RGB Parade should be between 70-80% and the foreground white should be around 90% and black should be…black…5% is OK, if it’s over 10% is will start to look washed out and you will eventually have to crush it (there are lots of nuances with the black level but this is an international article so we will leave it there). 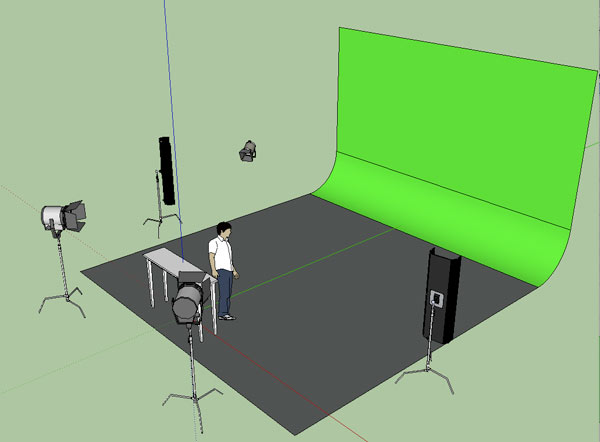 The basic layout we use for Macbreak and other training shows

A little more about scopes and screen levels. First of all, to repeat…you need scopes. You don’t need hardware scopes but you do need some kind of scopes. You need scopes to properly measure the evenness of the screen and to measure the Green channel’s relationship to the Red and Blue channels.

For evenness, you need a standard luma scope. This scope gives you a reading of the brightness values across the entire plate. The absolute value is not important (40-60 percent is a good start) but a flat line all the way across is. You want this line to be as flat and thin as possible. When this line is wide and uneven, it means there is variation in the screen. Variations mean you need to widen your key target to include more levels of green…often these soft variations coincide with the subtle greens on the edges of your subject…meaning you need to clip them to pull the key…meaning hard edges… which, is well, bad. 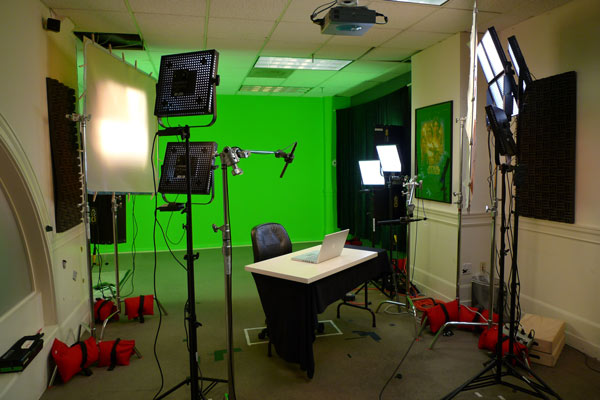 Here’s a similar setup in our office. The green wall is a decorating challenge but a much better green backing.

Once the screen is even, the RGB Parade can be used to measure green record and it’s relationship to the red and blue record. Clipping is the first thing to check for in the RGB parade. You do not want the green channel peaking over 90%. If it is, you risk clipping light greens. We usually shoot for 70%. These highlights are often on your subjects edges. The second thing to look for in the RGB Parade is the distance between the red, blue, and green channels. We consider 40 points to be a minimum for interviews or close-ups where you don’t see the person’s feet. If this distance is reduced, you will have less contrast in your matte and, as a result, less definition.

In Final Cut Pro…you can see a fairly flat luma scope and plenty of separation between the Green (pegged at 70%) and the Red/Blue channels (at zero). This is a function of using green kinos on a green screen.

In Final Cut Pro…you can see a fairly flat luma scope and plenty of separation between the Green (pegged at 70%) and the Red/Blue channels (at zero). This is a function of using green kinos on a green screen.

What to use for scopes? We use either Conduit or Scopebox. Conduit (once again, our own plug-in) gives us live set keys but Scopebox is a better set of software scopes. If you are on a PC, Adobe’s OnLocation has a good set of scopes to work with. You can also use Final Cut Pro’s scopes BUT you need to capture a sample and view it to check the RGB parade…a pain but a possibility.

So that’s the basic setup. Yes, there’s alot more to talk about but this gets most videographers onto the playing field. In the next installments of this series, we’ll talk about the capturing process, the keying itself, and the final composite.