Sacramento start-up GearNex surprised the industry last year by bringing a small, affordable and very functional gear head to market. It was mostly worth the asking price at the time. Now the price has gone up-and it’s a better deal than ever.

I stumbled across GearNex’s newest gear head at the Filmtools booth during my second day at CineGear. The head looked the same as I remembered when I used it on my Rambus job last December, but as soon as I took the wheels for a spin my jaw dropped and I turned on GearNex’s Bret Allen, S.O.C. with a look of rage not seen since Medusa accidentally stumbled into the House of Mirrors at a fair in ancient Greece:

“YOU’VE BEEN HOLDING OUT ON ME!”

And indeed he had. The head I’d used six months ago was good, but not yet perfect: the gears bound a little when the head was tilted severely up or down, and the gear ratios were a bit off: one speed was fine, the other way too slow. It was a great tool for the price (around US$5,000) because the next option was an Arrihead at $60,000, but it was definitely a first generation tool. I’d used it and really enjoyed it, but I did have some feedback as to how it could be better.

The gears are now twice as fast as the first generation and they feel just right. In addition, there’s a new “slip” mode that will help operators with fast pans: Panaheads and Arriheads allow the operator to grab the rear wheel and push the head quickly left or right, and the pan wheel spins into high gear until the pan ends-often when the operator grabs the pan wheel and brings it to a smooth stop. The GearNex head allows the operator to loosen a friction lock and spin the head in a similar way but without spinning the pan wheel. Simply push the tilt wheel in the direction you want to go, and when the move stops the pan wheel is ready for action.

The Arrihead’s tilt wheel is hinged so it can be pushed off to the right of where it usually sits, creating extra space for the operator when working in tight quarters. GearNex offers a 3″ extension ($750) that shifts the tilt wheel left or right, for tight spaces, or straight down if your camera’s length causes it to dip dangerously low when tilting full up. 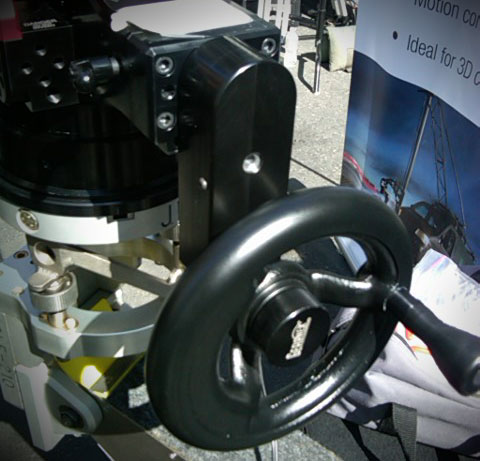 GearNex also offers a new tilt plate that attaches not only to their head but to ANY standard head or cheese plate: 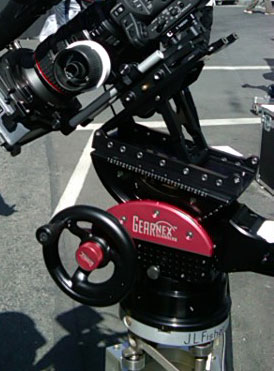 But nothing I’ve mentioned so far is as important as what I’m going to tell you now:

This thing is SMOOTH.

The gearing has been completely reworked using custom manufacturing, and the gears themselves are polished with a special coating that allows them to move smoothly and effortlessly. The first generation felt like a cheap version of an Arrihead or Panahead, which it was; this version feels exactly like an Arrihead or Panahead. It’s perfect. If you tried the old GearNex head and thought it was pretty good, try the new head and prepare to be amazed.

The new version, with the faster and smoother gearing, is $7,500. It’s worth it, much more so than when the head was $5,000. If you were on the fence before, get off the fence and place your order. GearNex offers current owners the opportunity to upgrade to the new gearing for $1,500.

Videography Magazine awarded GearNex its Best of Show Award at this year’s NAB, and if you can tolerate a minute of really annoying ads then watch Bret Allen demo his product for FreshDV below:
freshdv_nab10_gearnex

And you can read about my experiences with the first generation head here and here.

Art Adams is a DP/operator who likes to spin his wheels. His website is at www.artadams.net.