Is the 5D Mk II the one camera to have when you’re having only one?* 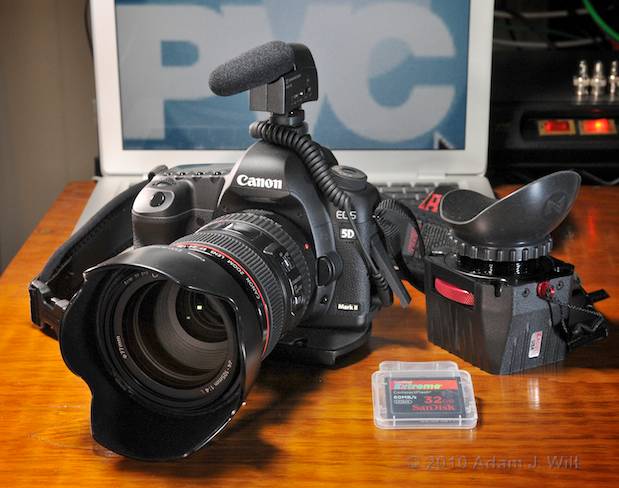 Here we are a week before NAB, and I find myself with a Canon 5D Mk II full-frame DSLR with 24-105mm zoom, a Sennheiser MKE 400 microphone, and a Zacuto Z-finder—and I’m a Nikon shooter!

Here’s the thing: we’re supposed to be shooting and posting a lot of video clips on PVC for this NAB. There were four ways I could go about this:

Bingo? That was a bit too facile, wasn’t it?

I’ve been curious about the practicality and usefulness of using DSLRs for mopix production for a while. I bought a Nikon D90 last year, but between its rolling-shutter jellocam, its downsampling errors, and its aliasing, it isn’t usable for any real work (the D300s fixes the downsampling errors, but it’s still a wobbly jellocam; the D3s appears to be a lot better, but it’s $5200, and it’s still a 720p-and-smaller cam with 11 kHz audio).

The need to shoot mopix at NAB gave me the perfect excuse to see how the other half—Canon users—live.

“So convenient a thing it is to be a reasonable creature, since it enables one to find or make a reason for everything one has a mind to do.”

With the recent release of 1080/24p firmware for the Canon 5D Mk II, I took the plunge, finding a clean, lightly-used package on craigslist. To outfit it for one-man, run’n’gun VJ work, I’ve added a Sennheiser MKE 400 short shotgun mike, which I chose for its compactness as well as its performance, and the Zacuto Z-Finder, which I like for its 3x magnification (helpful when trying to pull focus through the lens) and for its snap-on, snap-off design (so I can quickly switch between SLR and video modes).

No, I didn’t get any fancy support gear. I find that the basic assemblage is no harder to handhold than an AG-HVX200, and it’s less painful to deal with an an unbraced PMW-EX1 (damning with faint praise, perhaps, but there you have it). If once I’m on the show floor I repent, well, I’m sure that between the Zacuto, Redrock Micro, and Cinevate booths I can put something together, grin.

With this kit, I can shoot both high-quality stills and decent-quality video. Yes, in video mode there’s some aliasing, some color fringing on fine detail, and some jellocamming, but not to excess; if folks are interested, I can do a proper review of the 5D Mk II as a video camera and discuss the issues there.

I’m at the show for only two days this year; in my short time I’m focusing (pun intended) on cameras and on LED lighting. Expect photos and writeups starting Sunday night, and video to follow later in the week once I’ve had time to cut it all together.

*with a tip of the hat to Carlsberg Beer’s mid-’60s ad agency.

I bought the 5D Mk II secondhand from a chap on craigslist; the mike and CF cards from Amazon, and the Z-finder from B&H Photo. I spent my own money, and nobody gave me any special discounts (well, the nice chap who sold me the 5D threw in his spare battery for no extra cost when I also bought his 50mm f/1.4 lens). No material connection exists between me and any of the vendors/manufacturers mentioned.