Cinematographer Jonathan Bird is one of the lucky ones. He’s successfully combined his love for scuba diving and photography into an award-winning career. After more than a decade of delivering underwater photography and video to National Geographic and Discovery Channel, Bird started his own series that combines humor with science in a highly educational, family-friendly format. Jonathan Bird’s Blue World, now airing on PBS, won the CINE Golden Eagle Award, a total of eight New England Emmy Awards, and has been nominated for two National Daytime Emmy Awards. For his next project, Bird is connecting the sea and space with an innovative film made for planetarium theaters.

Adobe: Tell us why you decided to create Jonathan Bird’s Blue World.
Bird: I had been working both as a cinematographer and producer for years, but I still dreamed about working on a show that entertained audiences of all ages without talking down to them or losing the educational slant. No one else was making the show that I wanted to see, so I finally just decided to do it myself! It wasn’t until we got an audience on YouTube that people started paying attention to our show and we made the jump to TV. We just finished the fourth season on PBS. 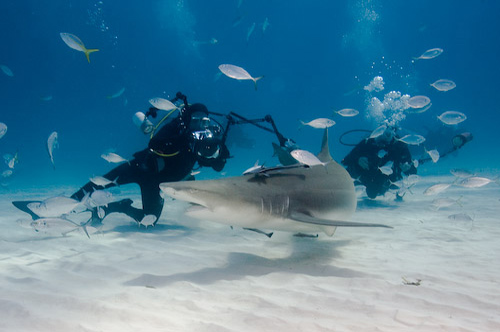 Adobe: What are some of the challenges of shooting underwater?
Bird: Even in the clearest water, you need to be very close to the subject to get an image with any kind of contrast or sharpness. We try to shoot everything from less than five feet away with wide angle lenses. When trying to film wildlife, of course, that means that we have to figure out how to get close to our subjects without frightening them away.

Color is also a big issue. Blue light has a short wavelength, which makes it the only color that penetrates water well. The deeper you go, the bluer your image becomes. In shallow water we can use filters and white balance to help bring out the colors, but at greater depths the only way to add color is to use powerful lights to illuminate everything. We can’t just add colors or clarity in post, so we have to use the right camera and techniques to get it right while we’re filming. 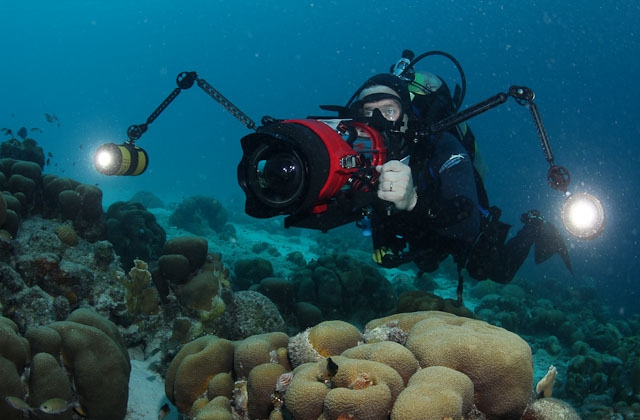 Adobe: What is the production schedule and format of Blue World?
Bird: The show is massively low budget, but we take the time to make it good. It takes about 18 months to shoot a season. Last season we produced 11 half-hour shows. The season before that contained 9 shows. It is a magazine-style program, so it isn’t all one story. We typically put between two and three different stories together, and they can be completely unrelated. This format also makes it easy for us to package content online into webisodes.

Adobe: What can you tell us about your upcoming film project?
Bird: Space School is going to be something completely different: the world’s first live-action planetarium film. Planetariums are traditionally about space, so I proposed a film that takes people into the world where space travel and underwater experiences meet: astronaut training. Astronauts train underwater in the Johnson Space Center Neutral Buoyancy Laboratory to simulate weightless conditions, and later they spend time in Aquarius, an underwater research laboratory in the Keys, to get used to living and working in cramped, isolated conditions. 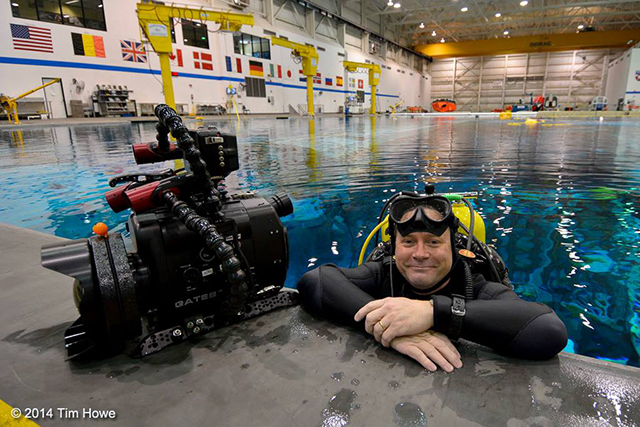 Adobe: What opportunities do planetariums represent for filmmakers?
Bird: When most people think about planetariums, they tend to think about a Zeiss machine that just shines bright lights to represent the stars. But planetariums have moved way beyond that. They have banks of computers calculating huge data sets of imagery that can fly you around the solar system. With their full, domed screens, planetarium theaters offer a completely immersive environment that will work incredibly well with the underwater footage. 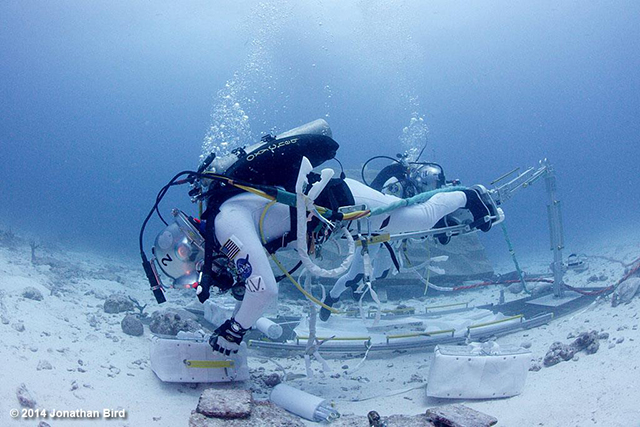 Adobe: Why didn’t you just create a film for the IMAX DOME theaters?
Bird: There are 500 planetariums across the United States, compared with only about 40 IMAX DOME theaters. Almost nobody is making content for IMAX DOME theaters anymore because it is too expensive to make a 70mm IMAX film for only 40 screens, and it takes too long to make your money back. So IMAX has gone completely to flat-screen style 3D projections, which are absolutely amazing in their own right.

The reason why there aren’t more live-action films for planetariums is simply because they’re incredibly advanced. The planetarium market is all about realism, with content shot at 60 fps, which is unconventional for traditional movies. The displays are also extremely high resolution at 4,000 pixels square. You’d need an 8K resolution camera to perfectly fill the screen—and no commercial manufacturer makes 8K cameras! That’s why most of the films shown on planetariums so far have involved CG animation. 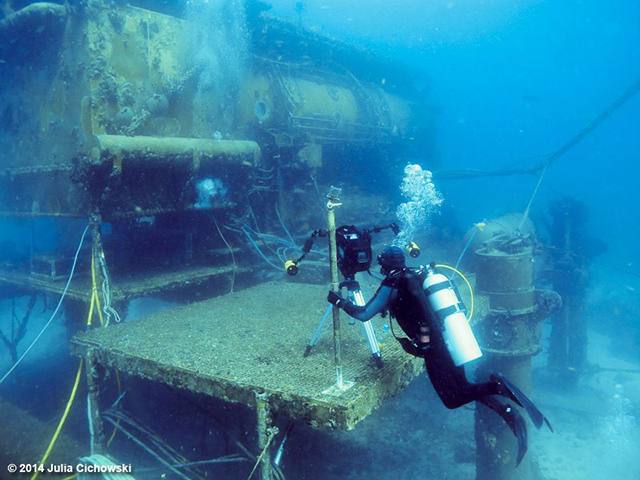 Adobe: How did you approach making Space School given these requirements?
Bird: When we started, RED had just come out with its 6K DRAGON camera, so we could come close to true planetarium resolution. Once we had the camera, though, we had another problem: we needed a system that could handle editing our footage. At 6K resolution and 60 fps, we were looking at an extraordinary amount of data—about 8 GB per minute—in RAW format. We did a lot of research into the subject, and we finally figured out that the only setup around that could handle the load was Adobe Premiere Pro CC running on the fastest HP Z Workstation available.

Adobe: What is special about Adobe Premiere Pro CC?
Bird: Adobe Premiere Pro CC has the best playback engine of any non-linear editor on the market, even for video that is notoriously difficult to play back in real time. Premiere Pro doesn’t care where video comes from; it just plays it, no transcoding required. Being able to cut out the transcoding process is a huge time saver. And Adobe makes the transition from Final Cut Pro so easy (for those of us that have been using FCP for years). I was up editing on Premiere Pro in a couple of hours. 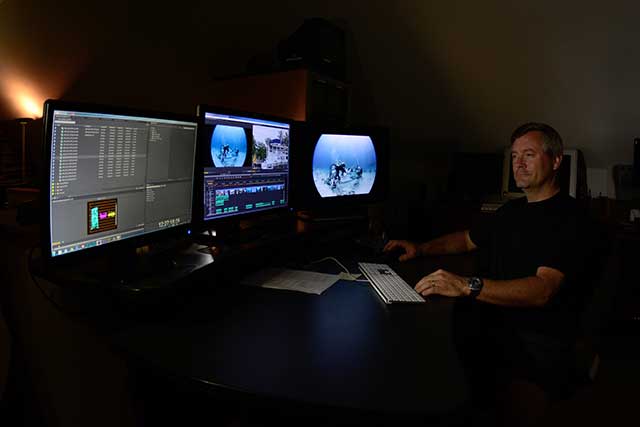 Adobe: How was the switch from a Mac to a PC?
Bird: I’ve always loved working with Macs. But when we decided to move away from Final Cut Pro, we realized that we didn’t have to stick with Macs anymore. We decided to switch to the fastest computer we could find, which turned out to be the HP Z Workstation. We did a rendering test to compare the speeds, and an Adobe After Effects project that took 12 hours to render on the Mac took two hours on the HP system.

There are probably lots of people in the same boat as me—people who want the power of a PC but are uncomfortable with Windows. Creative Cloud is great because the software is exactly the same across platforms. I can even move files between the Mac and Windows environments without any problems. I also like how all of the software we use, like Premiere Pro, Photoshop, Encore, and After Effects, share similar interfaces and operations. It makes it easy to pick up new software.

Adobe: What’s next for you?
Bird: We started shooting with NASA in May and we’ll be delivering it to theaters in January. We’re also continuing with Jonathan Bird’s Blue World, and our YouTube audience continues to grow. We recently launched Shark Academy on YouTube, which features two to three minute shark videos that kids really like. Another focus for us is to put out highlights from some of our videos that are more shareable. Overall, we want to continue telling great stories for audiences of all ages.

Read more about Jonathan and his work here.