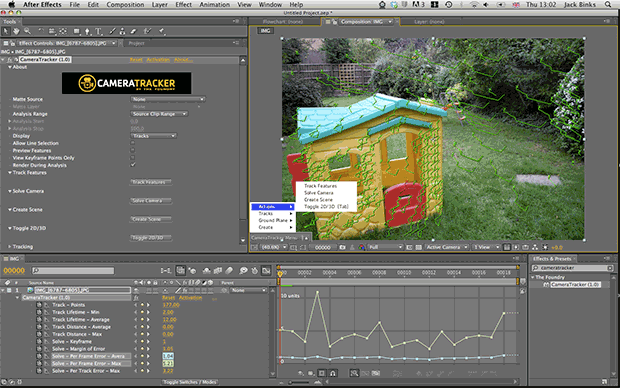 The Foundry, makers of Nuke and the Furnace tools, today released two After Effects plug-ins, and they are two of the biggest additions to come to the application in some time.

CameraTracker will soon be the “I can’t believe I lived without this” addition to After Effects, allowing you to matchmove a 3D camera to a scene directly from the Composition viewer. It’s also an “I can’t believe they pulled this off” piece of technology which rivals Trapcode for pushing the After Effects API to its limit, as it offers a multi-stage automatic tracking pipeline with the ability to manage individual points and work with selections, all without requiring a separate application.

Kronos 5.0 offers a whole new approach to retiming footage, bringing the latest technology at the heart of the Furnace retiming tools to After Effects. It uses BLINK technology to leverage an nVidia CUDA GPU for optimum speed and performance with this processor-intensive task. Included with Kronos is a separate effect just for adding motion blur, called, intuitively enough, MotionBlur.

More complete coverage and reviews of these two effects to follow.