Scripts, some tutorials, and plug-ins

Folder or unfolding layers has become popular in After Effects and other apps in the last several years, and tutorials, scripts, and even animated typefaces have popped up to help spread the meme. All we need now is an origami plug-in. 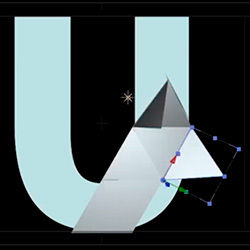 Perhaps the easiest way to start folding or unfolding layers is using AE scripts. Paravent from Motion Boutique is a free script that “creates a controllable folding screen animation from the selected project item. You can choose the direction, the number of panels, folding decay, decay order to completely customize your animation.” It's quite easy, and should speed things.

3D Splitter, a script by Jacob Danell, can split layers into rectangles for quick 3D manipulation. A related script by Jacob, Bend Layers, is also interesting – it splits, then does bends or stacks.

Around the same time, Mikey Borup posted the basic Folding video with After Effects tutorial, and a few months before that Accordion Fold Transition After Effects Tutorial.

More than a year before these tutorials, Jeff McIntosh from JMDesign posted AE Tutorial – Fold Effect.

Shutterstock has text on Animating a ‘Paper-Folding’ Effect, by Chad Ackerman.

Frontpage Media also has text on a method, and some renders:

At Digital Arts, Angie Taylor posted text for an “accordian” fold in After Effects tutorial: Create a 3D animation of folding paper. Project files are free with sign-in. Here's the result:

3D Layer Warp by Jon Okerstrom is an older article that used the Zaxwerks plug-in of the same name to create a paper airplane.

Bending layers in CS6, from After Effects Apprentice 11: 3D Space, is somewhat off-topic since the Bend feature in AE works in segments but doesn't fold all the way over.

There are a bunch of animated typefaces for After Effects, including Typogami, designed by Jeroen Krielaars (original source). It has a tutorial and customizable features, including fold angle and shading. Flapfont, by Mario Brauer, is another foldie option.

Variations on the theme include swinging test, flip-flap displays, page flips, and the like. There are several tutorials, including Create a Split-Flap Type Display by Mattias Peresini and CMD 88: After Effects – Magazine Page Flip! (skip in 5 minutes to avoid church chat).

Paper crumble effects aren't folds, but might still be handy. Here are a few tutorials:

While not very popular, there is interest in folding and tessellation (flexagons too), as seen in the origami documentary Between the Folds. An actual origami plug-in for After Effects would probably have to be a labor of love, as are the current standalone applications that generate or mimic origami folding. Both Trapcode Mir and Rowbyte Plexus seem close enough to add folding, but that evaluation is for developers and other experts. Here's a sample from the origami doc, and a TED talk from Robert Lang, creator of the open-source origami app TreeMaker (he did a Google talk later).

By the way, if you prefer 3D, there's a Fold It Plugin for Cinema 4D at C4DZone.

Among the many sources of inspiration on the topic are Box from Nakd and Syfy Logo 2 from Proud.