4K in the air… does the greater resolution make that much of a difference? Is it necessary to shoot aerials at 4K so one can stabilize in post?  Can the Octocopter we had on hand lift the 4K Blackmagic Production Camera long enough to get all the shots needed?

I wanted answers to all of these questions, but more importantly… I wanted to see what the 4K Blackmagic Production Camera could do up in the air.

With the help of Blackhawk Cinema, their twitter handle is @blackhawkcinema, we took the 4K BMPC up for a couple short test flights.  These were the kind of flights that allow the Octocopter operator to get his machine dialed in so he can have buttery smooth shots for future clients.  The details on the Octocopter: Freefly’s Cinestar HL with a few of Blackhawk Cinema’s modifications to reduce weight and become a more efficient heavy lifter.  Without a doubt, this Octocopter will fly with the BMPC well.  Weight was not much of an issue and it handled well. In the end we had flight battery times clocking in close to 7 minutes.  To me, if one plans accordingly, that is plenty of time to get more than a few shots. 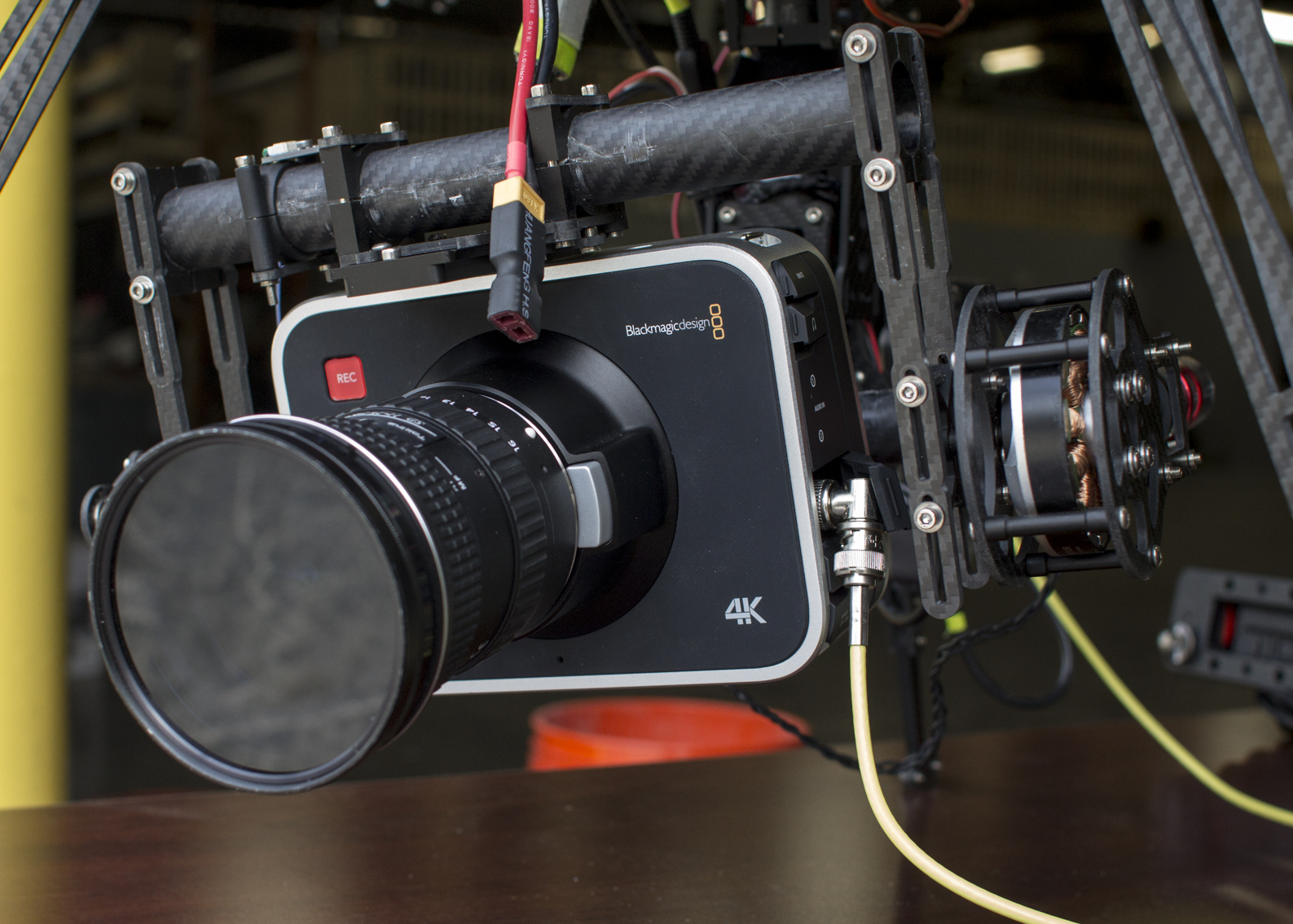 One thing about shooting 4K on a camera that has no wireless LANC controller yet… you end rolling record right before flight.  This inability to start/stop record makes for some very long clips that can take up a ton of hard-drive space.  Best to plan well and to hit that record button as close to lift off as is safely possible.

Just a bit of warning: I did not edit these clips… these might as well be straight from the camera.  I took the 4K footage and processed it via Resolve to an 1080 output.  The take-offs are found near the :15 second mark and the 1:00 minute make.

I have an older MacBook Pro which can handle DaVinci Resolve at 1080, but 4K… ever so slightly.  In order to process the footage I had to take anti-aliasing off. The aliasing and moire were not in the original footage.  The original 4K footage looks great… I mean really great.  I loaded ProRes 422 to vimeo so anyone can download the footage if they so choose.

4K is a great choice for aerial cinematography.  The extra resolution can only help in post if someone wants to smooth out bumps, bouncing, and anything else that can take away from a smooth shot.

Just like the Pocket Cinema Camera and the Cinema Camera the Production Camera is incredibly simple to use and power solutions are relatively easy to find.  According to Black Hawk Cinema:

“The Blackmagic Production Camera is now our #1 choice for 4K imagery from our unmanned helicopters. Not only can it capture stunning images, it can easily be controlled from the ground.”

My thoughts are simple… it feels great to fly a 4K camera that costs $2,995 and get amazing results.  Without a second thought, I’d fly this camera over more expensive 4K cameras on the market.  When the lossless compression firmware update arrives this powerful camera might become the aerial photographer’s choice.