Although flicker has had its uses in experimental film, in video flicker can induce epileptic seizures – although it’s mainly just annoying. Removing flicker is often easy but can also be quite vexing with certain combinations of out-of-sync lights, electricity, and cameras found in time-lapse and slow motion footage. 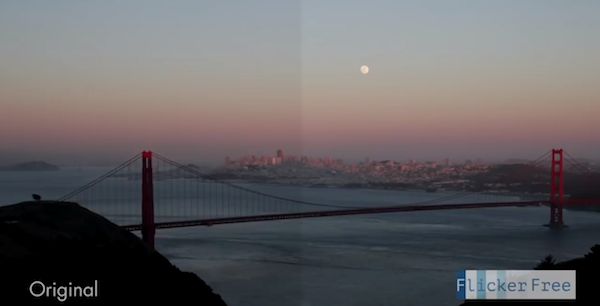 Although flicker has had its uses in experimental film, in video flickering can induce epileptic seizures – although it’s mainly just unsightly. Removing flicker is often easy, but can also be quite vexing with certain combinations of out-of-sync lights, electricity, and cameras routinely used recording time-lapse and slow motion footage.

For discussion of some of the issues concerning luminence flicker (not video field flicker) and how to avoid it, see for example About flicker problems by David Satz, Flicker-Free Lights, and Why They are Important to You from B&H Photo-Video, and Rough Guide to Flicker-Free HD Shooting by Art Adams (more 1, 2) here on PVC.

A good short guide on the problem is Reducing flicker for stop-motion animation and time-lapse photography by Benjamin Markus on the AE team blog, written before the release of two powerful plug-ins. Also useful are general shooting tips from Granite Bay Software to eliminate or minimize time-lapse flicker:

In Creative Cloud, you may be able to fix flicker, depending on shutter speed and frame rate, by simply duplicating the footage and dragging the top layer over one frame later in time then adjusting opacity. This technique was demonstrated by Philip Bloom in Premiere Pro CC in his video Die flicker! Die! How to remove that nasty high shutter speed/ high frame rate artefact in your NLE. It should be easier than the earlier advice from Dave LaRonde, though adding layers at various time offsets and lesser opacities may still be required on some shots.

After Effects has built-in plug-ins designed to remove the flicker common to varying lighting conditions exposed by time-lapse photography and stop-frame animation. The old warhorse is the Color Stabilizer effect, which “samples the color values of a single reference frame, or pivot frame, at one, two, or three points; it then adjusts the colors of other frames so that the color values of those points remain constant throughout the duration of the layer.” Auto Levels, Auto Contrast, and Auto Color can be used too. In another direction, on one forum in 2012, Chris Wright said “AE has warp stabilizer for motion and auto levels, auto color for flicker, but I’ve had the best luck with my auto white balance flicker removal project I made a long time ago. 25% on the textbox is the sweet spot for clamp.”

There are a variety of dedicated flicker removal plug-ins available. Some are in plug-in bundles like Genarts and Boris FX, which available for NLEs and vfx software on various operating systems. Here’s Boris Flicker Fixer in action.

LRTimelapse uses Adobe Lightroom, and grades by changing frame metadata in their app.

There are also several well-maintained, inexpensive, yet more industrial-strength commercial solutions for Premiere Pro and After Effects CC.

Granite Bay GBDeflicker has been around since 2007, and is available as a Windows standalone app or as a Premiere Pro-After Effects plug-in on the Mac & Windows. GBDeflicker offers advanced controls which were discussed on their blog.

Flicker Free from Digital Anarchy (long associated with After Effects) is a newer but highly-regarded plug-in. It’s said that Flicker Free “solves an issue that’s common to anyone that does time lapse or shoots slow motion (high frame rate) video. Flicker happens due to many reasons, exposure variations, electric lights, or just old film.” It seems to eliminate interference and flourescent strobing effectively.

RE:VisionFX also got into the game with DE:Flicker, improving a workflow that previously used a combination of RE:VisionFX ReelSmart Motion Blur and Smoothkit to stop strobing caused by a lack of time samples. DE:Flicker consists of 3 plug-ins for auto-levels correction, high frame rates, and timelapse video.

Please note that this roundup is for quick review and comparison. There is almost always vital information from the originating authors at the links provided — and often free presets, plug-ins, or stock footage too. – See more at: https://www.provideocoalition.com/spirals-in-after-effects#sthash.FzPlTlqG.dpuf
Support ProVideo Coalition
Shop with