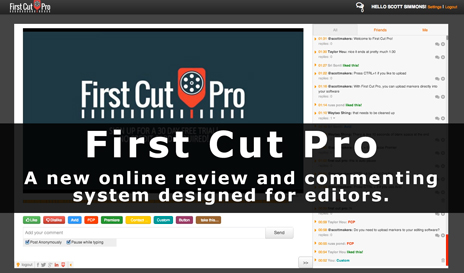 The review, commenting and approval process is certainly an important one when it comes to getting a client to sign off on an edit and get the job out the door. How exactly you go about this task so that it is painless for both editor and client can be a very big question. If time and proximity permits having a client sit in on the session that is a great way to go. If you’re separated by distance you might choose something like First Cut Pro.

First Cut Pro isn’t the first online review site out there on the ‘net and I can guarantee you it won’t be the last. I haven’t used any of the others in a long time so this isn’t a comparison to any others, just a look at First Cut Pro. Yes, that name is very similar to another “F” Cut Pro so that may or may not help out in the long run. First Cut Pro is an offshoot of a more consumer oriented service called RollyPolly that is designed to be an interactive commenting system for web video (as well as analytics). It seems like a good platform upon which to build a more professional review and approval system for the film and video world.

The idea is simple: upload your edit to Vimeo, Brightcove or YouTube (those services are supported now but likely more to come), invite your viewers into the custom First Cut Pro viewing room and they can watch and comment on the video. Those comments are listed in the viewing room interface and the editor can then download those comments into an NLE friendly file that can be brought back into the timeline. Not a radical concept overall but the strength of First Cut Pro is that it works well. In addition First Cut Pro provides some detailed analytics on who has viewed the video as well as some of their behaviors while viewing.

First, you’ve got to get your video posted. Your first reaction might be (as mine was): “I can’t put my unfinished client videos up on a video streaming site.” There are a lot of people doing just that and rest assured you can use a private Vimeo embed as one option. While you can’t use a private YouTube embed you can use an unlisted YouTube clip as all you need is the YouTube URL. The chances of anyone finding an unlisted YouTube video these days without a lot of description and keywords is most likely slim and none.

A better option might be Vimeo as you can have much better control over the security of the video. I asked the First Cut Pro folks about this issue since a YouTube video that is unlisted is technically available to the public and they sent back these recommended Vimeo settings for optimum security: 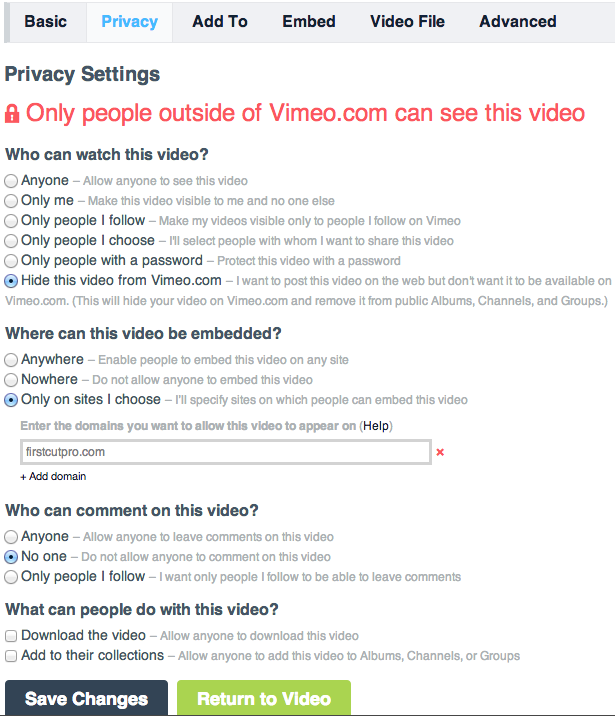 Once you’ve got your video ready, add a new project in the First Cut Pro interface, invite the viewers and you’re ready to go. There are a number of customization options including the ability to allow viewers to see only their comments, a place for notes on the project as well as password protection. New features are getting added regularly as development of First Cut Pro seems rapid. Once cool thing is the ability to make custom buttons (currently a maximum of 8) to let viewers make notes with just a click rather than a type.

Setup is easy and rather self-explanatory so if you can run an NLE you’ll be able to figure out First Cut Pro. If you want to just see what it’s like to use the service then click over to this viewing room that was set up for the curious to see what it’s like: http://firstcutpro.com/private/45ef2b743

One thing missing from their website is pricing information, which is important to most everyone. When you check the pricing page (as of this writing) this is what you see: 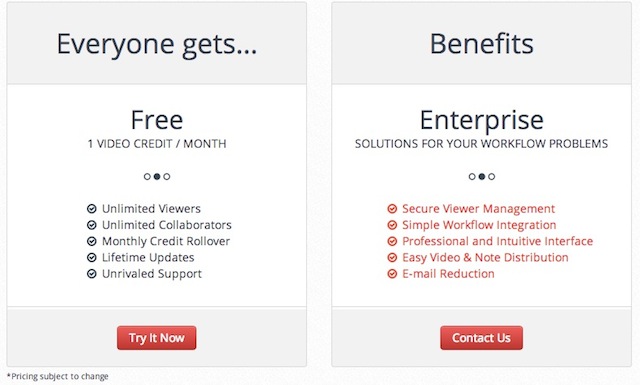 That doesn’t help put together a budget so I asked the First Cut Pro folks about pricing and these are their current working numbers (though as well all know pricing is subject to change … as it says above):

• A streamlined interface to watch and comment on a video 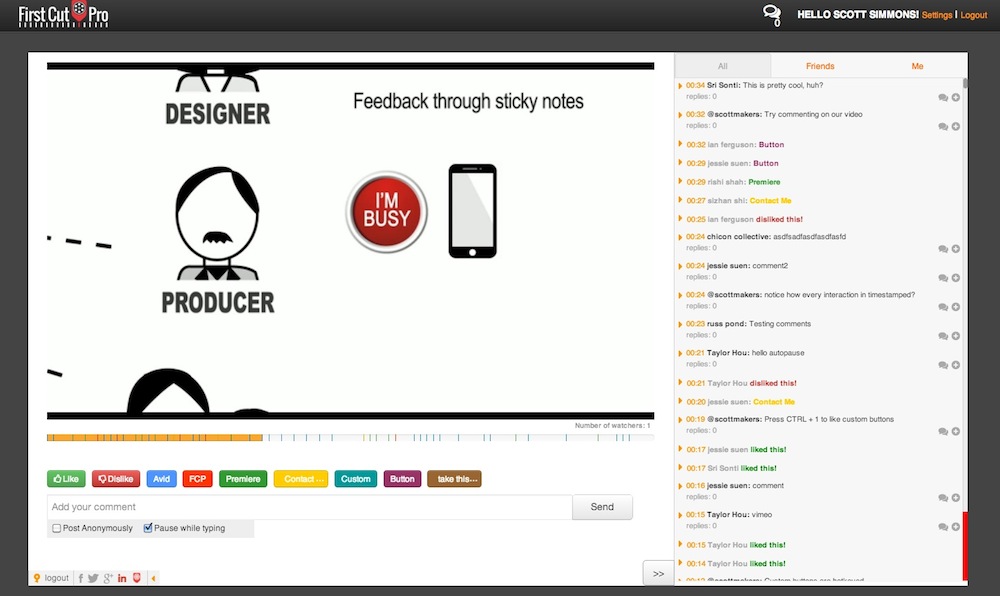 Comments are all listed down the right side. You can click on the time next to the comment ot jump to that frame of the video. User defined buttons make quick comments a breeze.

There might be some streaming video latency when you do this but overall it works well. Click on the tic mark and the playhead jumps right to it.

This seems like a small thing but the option to pause while typing a comment is great. When you hit return playback begins again.

You can create up to 8 custom buttons that appear under the playback image. With those, viewers don’t have to type anything, just click to mark that place in the video with that comment. This could encourage some over zealous clicking so make a positive button or two.

These reply threads will come in very handy as editors discuss why they made a certain choice and why they don’t want to change it. You can also see the ability to edit and delete your own comments if you are signed in.

Get a broad overview of the comments on a video, where people stopped watching and lots of other stuff I haven’t explored yet. Even if you don’t really make use of the graph it’s at least cool to look at. 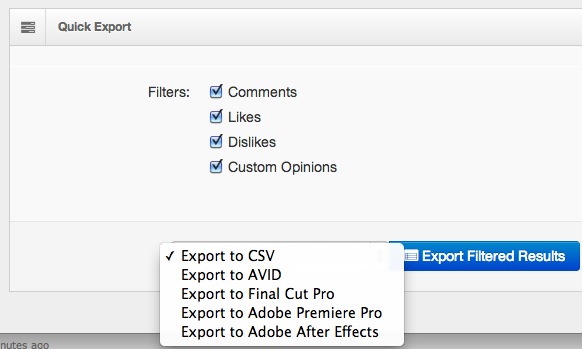 This is by far the most useful feature of First Cut Pro and a very important one for any online review and approval tool. All the major NLEs are supported. They say it auto-detects the type of FCP XML (either 7 or X) though I’ve only used it with FCP7.

• Markers do import back into the NLE 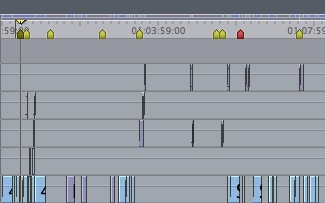 I only used Final Cut Pro 7 on this job so I’m not sure how the markers come across in other NLEs but in FCP7 the markers came in yellow, which was nice since red is FCP’s default marker. For FCP you have to upload an XML of your edit for First Cut Pro to modify with the comments. That scared me a bit at first but it worked.

What needs some work

Sometime I would notice the tic marks under the video weren’t there so you couldn’t get an idea of the overall scope of the comments just by looking. 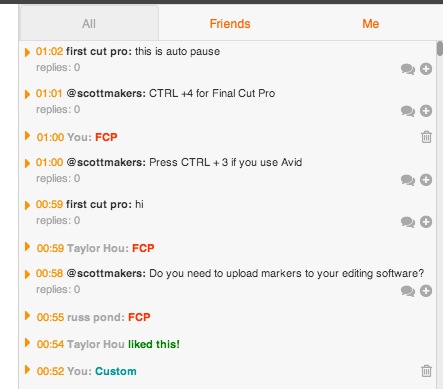 When you click on the time link in a comment on the right side of the interface the playhead will jump to that comment. But often I’d forget exactly which comment I was dealing with so it would be nice if the last commented that passed by the playhead was shaded or colored for easy identification. When playback does hit a new comment that comment jumps to the top of the list.

• You’re at the mercy of online video

Currently you have to upload your video to YouTube, Vimeo or Brightcove so you’re really at the mercy of how well those services are performing when your client goes to view your cut. That’s great for First Cut Pro as far as paying a video bandwidth bill but your client may not like the fact their video is hosted in an online video site … even though with Vimeo it can be private. From the looks of the image above it would appear that FTP is coming.

I used LinkedIn to log into First Cut Pro. When I went to invite viewers it used my registered LinkedIn email address and not my work address that all the clients on the job were familiar with. Yes that was user error on my part but it did cause some confusion so either letting me know what return address the service is using or letting me type in a custom address would have been nice. If I had signed up for First Cut Pro with my work email using their own account system this would most likely have been avoided.

When I sent my first invites I had no idea that the invites to my clients would come from a rollypolly.com email address. Yes this is the parent company of the service but I was telling everyone we were using the First Cut Pro service so this video coming from rollypolly.com inviting them to view a video looked a lot like spam.

• Yea, that name is very familiar

I’m sure the First Cut Pro people are aware how closely to Final Cut Pro their name really is. I guess we won’t be referring to First Cut Pro as FCP.

Overall I had a good experience with the service. My clients that were using it seemed to make good use of it as well. Once they had trouble logging in so we lost some time troubleshooting but First Cut Pro support gave a few ideas that helped with that login.

As someone who has used timecoded BITC Quicktimes for pretty much my whole career First Cut Pro was a breath of fresh air in both viewing and understanding the comments on various stages of our edit. To click a comment and see it in context was a useful first stage in the review process. But the real joy of First Cut Pro came once I loaded all those comments into the timeline. Then I could jump to the new comment markers with the click of a button, read those notes and makes those changes. With the comment marker living in the NLE timeline I could mark those changes as complete, make my own notes on the comment or jump back to the First Cut Pro interface and make that note about a particular comment that my client could see as well.

The First Cut Pro team is actively updating the service and there were a few updates pushed out as we were using the system. With the ability to try to service for free (with one video uploaded a month) it’s worth a try for editors everywhere. The developers mentioned to me that they are actively looking for people to help pound on and test out the site. They also said this: “Initial partners will be able to use the product for free and will most likely get a nice discount for being early adopters. Our official twitter is @firstcutpro which we actively monitor.” So if you need the service and want to help them work out bugs and maybe even help develop a few features then hit them up via Twitter. If you’re not on Twitter then I bet they’ll respond to their contact form as well.