It was late February 2015 when some might say Final Cut Pro X had its big confirmation, a coming out party if you will when Apple published its biggest In Action article for FCPX as of yet:editorial of the new Will Smith movie Focus. It’s a good read about how FCPX cut its first major Hollywood feature. A more in-depth read on the process is a new book by Focus assistant editor Michael Matzdorff: Final Cut Pro X: Pro Workflow. 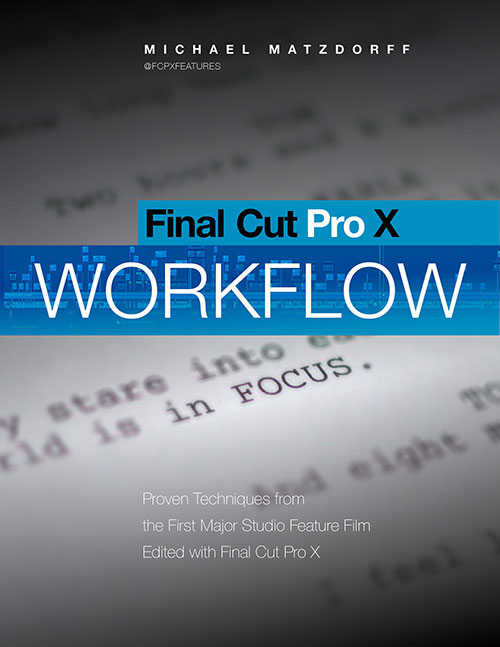 The full title of the book is Final Cut Pro X: Pro Workflow – Proven Techniques from the First Major Studio Film Edited with Final Cut Pro X. Here’s the iBooks store link. The book isn’t yet available on the Amazon Kindle but that should be coming soon. The cost is $9.99 for the 91 page book. If there is interest Mike is also exploring a print version but for 10 bucks and a quick read the iPad is perfect for this type of book.

If you’re on the fence about FCPX as an editorial tool then this book isn’t the Cold Mountain read you might be looking for. It’s a much shorter, much quicker read that is less about establishing a benchmark for FCPX from this point forward and more about providing just the facts. It’s full of workflow techniques that were used to get Focus to the screen and they are presented quickly, often in a bullet-point style, with little commentary about the process, the competitors and what the parties involved might have been trying to prove. The book could have used another pass through the proofreader but as one who has to proofread his own work I can tell you it is not easy (there may be typos and incorrect word tenses in this article!). More than anything, Final Cut Pro X Workflow presents new information about the beleaguered NLE that we have yet to see and hear.

What it does, in a roundabout way, is answer the critics who have said that Final Cut Pro X isn’t a professional tool that can’t be used at the Hollywood-level (whatever that really is). If you think FCPX can’t cut a feature then the proof is on the page and at the multiplex: Mike has written down the meat of how they did it and the movie FCPX made is now on the sliver screen.

See below! Proofreading your own work is damn near impossible.

Beyond the FCPX specific talk there’s also some practical advice and tech talk for anyone cutting a feature. Dealing with VFX and audio are universal tasks regardless of the editing software of choice and Mike talks about dealing with both. I particularly appreciated the discussion of getting sync between the edit station and a client monitor and the options they used. That discussion reiterates the desperate need for FCPX to add some sort of full screen playback to an attached display. 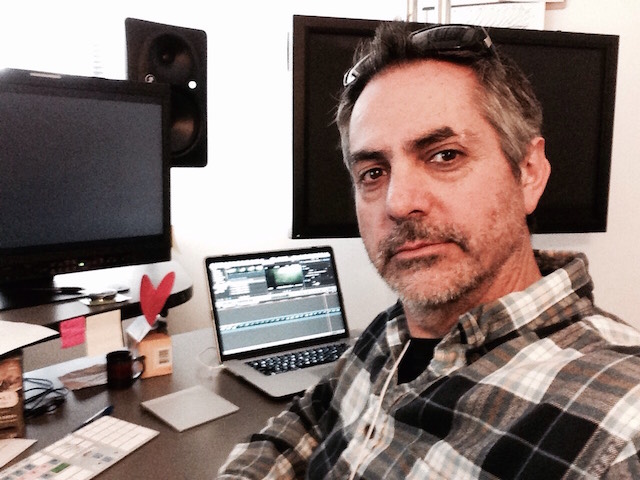 Author, assistant editor (and I’m sure editor as well) Mike Matzdorff. That’s FCPX on the laptop behind him.

One commentary I’ve seen since the Apple article went live is that you can’t edit a feature film on a $300 piece of software since the Focus workflow required a lot of third party tools to make this work. Mike lists them all in the book. Usage of these third party tools will undoubtedly come and go as FCPX matures even more. I was curious as to what the final cost might be once you buy all of the supporting tools and here’s what I totaled up (I’m just totaling the direct add-ons to FCPX or tools that had to be purchased for features that aren’t built in):

There were other tools used in the Focus workflow, some free, some cost. Mike points out that not all of these were used extensively and not all productions would need all of the above tools but for a complete toolset that would match everything that Avid Media Composer could do most all of these would probably be needed.

Those third-party tools do add up to way more then the $300 FCPX price tag but it’s nowhere out of the realm of what a feature film of any budget can afford. It’s also rivaling the cost of Avid Media Composer and Adobe Premiere Pro so this is another example of how the cost of the software tools to cut your feature film no longer factor into the equation of feature film post. This doesn’t factor in hardware costs and the cost of the talent used to edit and assist a feature. It shows that Apple has taken a different approach to FCPX: build a basic tool to cut the pictures and let everyone else fill in the gaps to adapt FCPX to more advanced workflows. Why spend resources to develop for a small niche when the market will do it for you?

What I found most interesting about this whole process, and perhaps the most revolutionary, is the film shot mostly to ARRI (Alexa the camera of choice) ProRes 4444 2K media and editorial was able to cut from these camera originals (read the book for discussion of going to Proxy files for offline editing or this article for more detail on this decision). They also used the full resolution files for many stages of post from titles, to VFX comps to preview screenings. This took a lot of steps out of the workflow and a lot of expensive pieces out of the process. In theory this could be possible for a feature film that isn’t editing on FCPX as both Avid and PPro have the capabilities to work with high-resolution, high-fidelity intermediate codecs like ProRes 4444. This codec is good enough quality wise, and small enough bandwidth wise to cut on off-the-shelf computers with affordable computer hardware.

As the First Assistant Editor, I have no idea about the size of the budget of Focus. But it’s a major film, with a major star, from a major studio. And it was cut by two editors on a $299 piece of software using mostly iMacs, one Mac Pro and the occasional laptop.

Final Cut Pro X has one simple feature that is, IMHO, one of the most important features for a creative offline editor that has yet to be matched in its competitors: the ability to easily transcode hi-resolution media to smaller, faster proxy media and easily switch between online and proxy offline editing. That last bit is key as that makes for a seamless workflow throughout months of cutting (be it a feature or otherwise) as an editor moves between machines in the cutting room or their laptop. Yes this can also be done in other NLEs but if you’ve ever tried to relink offline to online media in Adobe Premiere Pro or move only low-resolution proxy media in and out of Avid Media Composer you know it takes work. An editor working without an assistant around will probably love this ease of switching between proxy and online media. And perhaps those assistants will love it even more.

It’s that workflow that FCPX has very right. The editorial tools in FCPX is what is open to debate and the internet has been engaged in that for a couple of years now. I was following a comment thread on Facebook the other day after the Apple Focus article went up. I said this: It’s amazing that an application designed to cut video together to tell a story can cut video together to tell a story. Ultimately that’s all that it’s doing with some under-the-hood plumbing to get those edit decisions out to finishing for the big screen. But FCPX took such a beating upon release it deserves a little time in the sun.