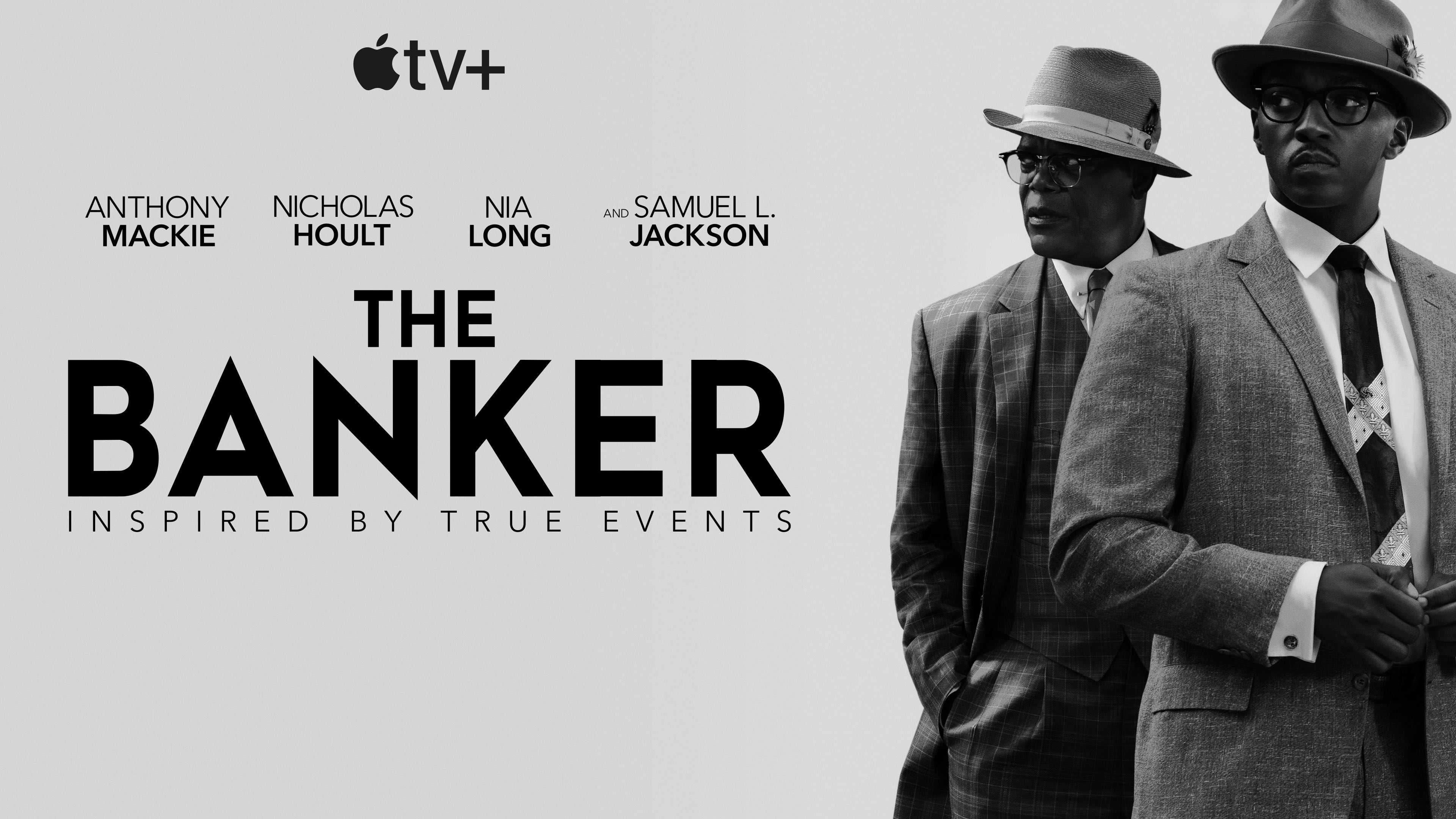 “A lot of the previous systems were more tethered to the tools that came before more tethered to flatbed or linear editing,” said Viertel of how he began to understand the new system. “Final Cut X, they really tried to figure out what other direction you could take it in a digital world and come up with some things that are very different.”

And those differences, coupled with Bailey’s feedback, led Viertel to choose FCPX as his editing software for The Banker.

“I think a lot of editors go through a thing where you open it (FCPX) up and it doesn’t have a lot of the things you are used to,” said Viertel. “There’s a fear factor…if you have done something…for many hundreds of hours and you feel like you know how to do it and you open up a program that doesn’t have any of the structure you are used to, it takes a little time to sort of push past. You have to learn to walk again.”

But with Bailey’s feedback, Viertel learned FCP X on smaller projects so when they were ready to start The Banker he was prepared.

Early on, Viertel had been editing on location with clips straight from the video tap because they were shooting 35mm film. He wanted to be sure they were getting the shots they needed, especially for transitions. “There are things you can edit on set as a check. There are certain things transitions, action…continuity things, it’s useful just to make sure you didn’t walk away with something you might need,” said Viertel.

Shooting in Georgia, the film would be processed at the Kodak processing center there then sent to Technicolor for transfer. The process took about three to four days before dailies were in the high-resolution form. Viertel was using the video tap’s low resolution, VHS-like quality footage. He created Multicam clips within his edit which made it easy for assistant editor, Steven Moyer, to come along with the high-resolution proxies to replace the low-resolution footage from the video tap. By replacing these clips within the Multicam clips anywhere this footage lives it would automatically update in the timeline or the browser.

When it came to organizing scenes, Moyer made Smart Collections for each Event (scene). The keywords included lines of dialogue, film roll, audio roll, characters, angles, scene name, etc., and Viertel appreciated the detailing of the keywords. A time-consuming process was cut down for Joel when he needed to find a take quickly.

“Now Joel can essentially pick and choose, ‘okay, I want this character, saying line two, in a closeup.’ You just check all the relevant keywords (Character A, Line 2, CU) and the browser will populate with only clips that match all  three of these criteria,” said Moyer.

With time being a factor for the post-production team, this system could not have been better. When Apple chose to partner with the team of The Banker, things changed in a great way.

Before the partnership took place, Viertel and the team had planned to finish in 2K with a 5.1 surround sound mix. When Apple came along as a partner at picture lock they changed the finishing requirements to 4K with Dolby Atmos sound and Dolby Vision. After the rescan of the film and with the timeline the same, the entire team was able to finish on time.

The VFX team and the editorial team truly had to collaborate, especially after the rescan of the film was going since the VFX team had to start over on the work they had done. Moyer tried to make sure “efficiency gains aren’t lost” as they were tracking the VFX shots.

“We noticed it might be useful for our vendor to be able to see this info,” said Moyer. “So I would regularly re-generate and copy this data into a shared, live file in the cloud so that anyone on the team that needed it could access an always-up-to-date copy of my tracking sheet. Tracking VFX shots by hand is a pain. Producer’s Best Friend sped that up dramatically.”

With the film completed, Viertel and Moyer are both hopeful to see what’s next in the world of post-production, especially with FCPX.

“I would definitely use Final Cut again and hopefully it will continue to improve and evolve,” Viertel said.

“What makes FCPX both useful and unique is how it manages metadata. Metadata is the difference between finding the thing you need in 3 seconds via keywords, roles, & filtration vs finding it in 3 minutes via clicking through bins and scrubbing,” Moyer said. “The better any app gets at showing command and thoughtful utilization over metadata is the app that will save me time and remove clutter from both the organizational experience just as much as the storytelling experience. Final Cut is way ahead of the curve on this and you can see its obvious influence on other NLE’s. There’s plenty of room for improvement but it’s already amazingly useful here and now.”

Below is a Final Cut Pro X timeline snapshot of The Banker with audio lanes expanded. Right+click to open a full resolution image. 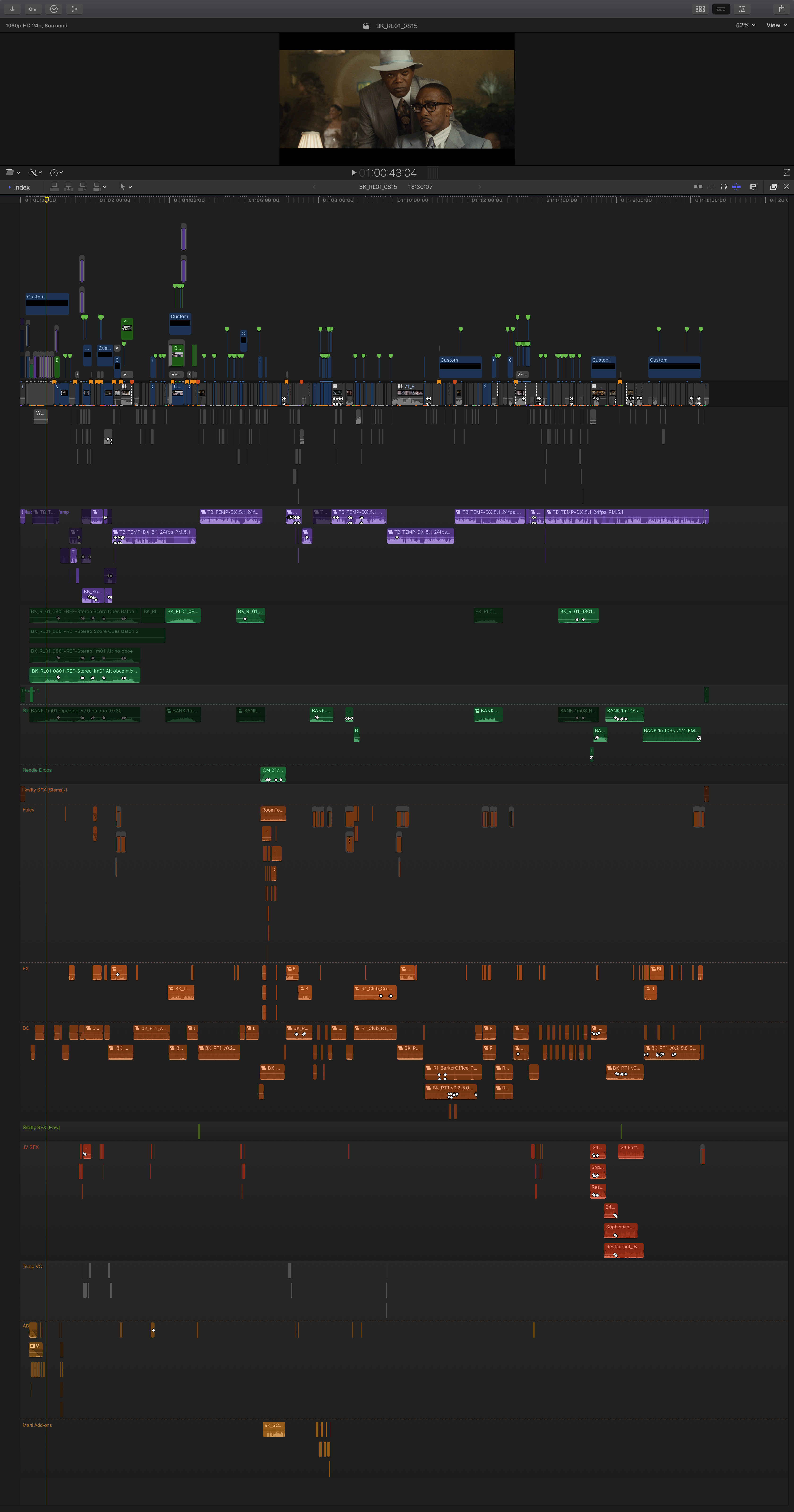