Kyle Patrick Alvarez has a knack for bringing the written word to the big screen. His 2009 film Easier With Practice was adapted from a 2006 GQ article by Davy Rothbart. Alvarez has now created the first film adaptation of David Sedaris’ short story C.O.G., which premiered in US Dramatic Competition at the 2013 Sundance Film Festival. Alvarez wrote the screenplay, as well as directed and edited the film. A former Final Cut Pro user, for this film he made the switch to Adobe Premiere Pro software, as part of Adobe Creative Cloud, and couldn’t be happier.

Adobe: Tell us a little bit about the film.
Alvarez: C.O.G. comes from Sedaris’ 1997 book Naked, one of his many collections of hilarious short stories and essays. This particular story recounts Sedaris’ experience working with a fanatical, apple-farming Christian, a self-described “Child Of God,” who fashioned stone clocks in the shape of Oregon. It deals with big ideas—sexuality, religion, identity—but it is also very funny. 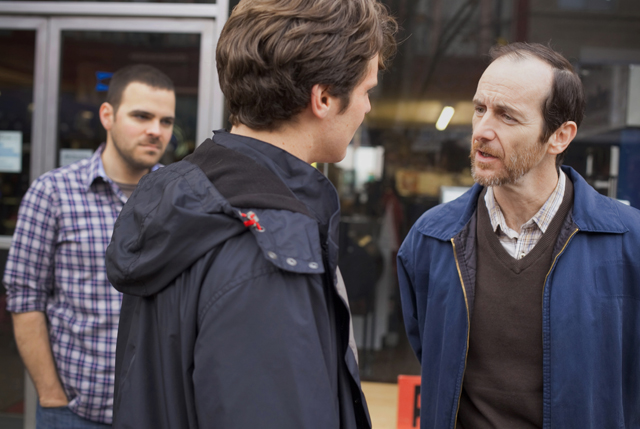 Adobe: You’ve been a loyal Final Cut editor prior to making this film. What made you consider Adobe Creative Cloud and Adobe Premiere Pro CS6?
Alvarez: Easier with Practice was one of the first feature films shot on a RED camera and the workflow was pretty untested at that point so we got some helpful post deals to try out the technology. For that project, we used Final Cut Pro 7 so we were editing on Pro Res and dealing with proxies. There was one 12 minute long take and we had to wait three hours on the set for it to transcode before we were sure we had the shot. Easier with Practice did well and was nominated for Best First Feature and I won the Someone to Watch Award. But the workflow itself begged for something better. We had to find a way to accelerate post production and lose the delays. And getting rid of the wasted time transcoding also would cut production costs, an important factor with indie films. We heard that the RED to Adobe Premiere Pro workflow was a lot faster and easier so we decided to check it out.

Adobe: Why did you join Adobe Creative Cloud?
Alvarez: It was a no-brainer in terms of going with Adobe Creative Cloud. It offers virtually effortless access to all the latest software and it’s always there for us. We use Encore, Media Encoder, Audition, Adobe Premiere Pro, Photoshop, Illustrator, Adobe Bridge, and After Effects, for everything from effects to movie posters—and the software really integrates perfectly together. With Creative Cloud, I always have the latest versions and the costs balance out to be really affordable. I really believe in this software service model; it is the way of the future as tangible media goes away for individual users. The expenses are much more predictable and digestible, especially to my producers. In fact, we save so much money on the software I was able to update my RAM.

Adobe: What ultimately prompted the switch to Adobe Premiere Pro CS6?
Alvarez: For C.O.G. we were working with an accelerated timeline that left very little room for error in terms of workflow. I learned about Adobe Creative Cloud and the ability to use native RED R3D files in Adobe Premiere Pro without transcoding and was intrigued. It really worked, and for me it was amazing. I could go on lunch break and my assistant editor would have rough assemblies done before I’d even finished my sandwich. The ability to just dump the raw footage without rendering right onto the timeline and start working really floored me. I could even cut scenes together while we were shooting. At times, I was working on a laptop editing 8TBs of raw footage right in the timeline and playing it back at one quarter resolution with no problems. I’d wholeheartedly recommend it for other independent filmmakers just due to simplicity and cost.

Adobe: Were there issues you faced in learning Adobe Premiere Pro CS6?
Alvarez: I tell all my other co-editors and friends (many who have the “old” perception of Adobe Premiere Pro as being outdated), you just need to learn a few different shortcuts. I’m not kidding. It’s that easy. I love the bones—the sheer structure and inner workings—of Adobe Premiere Pro, and especially the way it handles raw media files.

Adobe: What other Adobe tools do you use as part of Adobe Creative Cloud?
Alvarez: I didn’t have time to do my own sound work but I was able to create demos for the score in Audition. I also used Adobe Encore to create Blu-ray disks for screenings and of course a lot of Adobe Photoshop and After Effects come into play for any transitions or effects. We worked with another effects house for some of the more complex effects shots, but overall, the film is very simple with just a couple of transitions and overlays.

In one case, we needed to move a scene from one spot in the movie to a later scene but the character was wearing a different shirt, creating a continuity error. With After Effects, we were able to create a 3D model of the shirt and replace it. This would have normally required a reshoot but we were able to solve the problem with software on an independent film scale. For us, Adobe Creative Cloud paid for itself in that one instance.

Adobe: You’re an editor as your “day job,” right? Why did you choose to edit your own films?
Alvarez: I actually never intended to edit my own films. My “day job” is using traditional editing bays for PSAs and corporate videos, so when it came time to direct my first feature, Easier with Practice, I realized I didn’t really know any editors—nor did I have the money to hire one. So I decided to edit it myself using Final Cut Pro. I was naïve, to say the least. Editing your own movie is no fun. You have to make those gut-wrenching decisions yourself and act as a totally different crew person when you’re in the timeline. Just like you can’t think as a writer when you’re on set, you can’t think as a director when you’re in the editing room. I vowed never to do it again.

Now having finished production on my second film, C.O.G., of course our budget got cut, and then got cut again, and I had to bring myself out of editing retirement. I did things differently this time, though. I put a lot of the responsibility on Adam Shazar, who was my assistant editor on the last film. And Adobe video tools make it easier, because when Adam or I make creative decisions, we can quickly decide what makes sense, cut (even when painful), and we’re done. There’s a lot less agonizing and waiting around.

Adobe: What is it about C.O.G. that made Sedaris agree to let you adapt his work for film after refusing other requests in the past?
Alvarez: Sedaris has always had a history of saying “no” to protect his family. But this story doesn’t include his family in it at all, and the main actor who plays Sedaris bears no resemblance to him. I went to one of Sedaris’ readings, explained what I wanted to do, and gave him a DVD of my first movie. He liked it, which I think really helped. Ultimately, the film isn’t trying to embody or impersonate Sedaris; it is the telling of this one story that I dreamed about interpreting into a movie.

Adobe: What are the future plans for C.O.G.?
Alvarez: We were so thrilled to be included at Sundance. There are lots of tools to help filmmakers independently distribute their films, and we may explore those, but first we want to see how distributors respond and then we can determine what path we will take.

Update: On April 17, 2013, it was announced that C.O.G. was acquired for distribution by Screen Media and Focus World. The film will be released in theaters and digital platforms later this year.