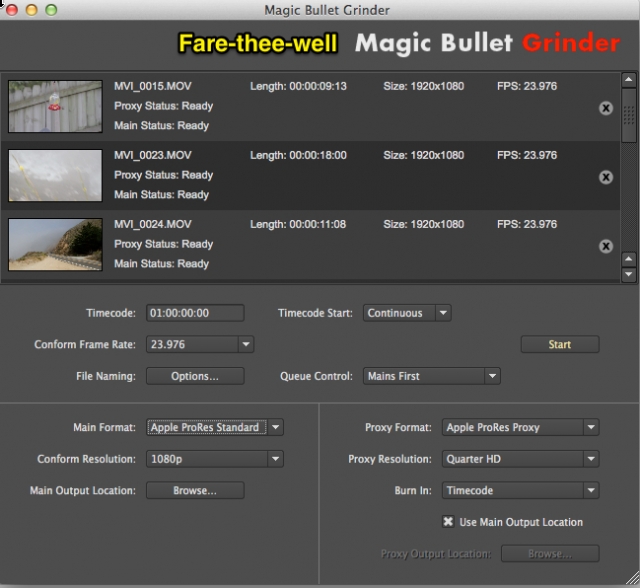 While prepping for my recent Useful Tools for Editors (as well as the HDSLR Post Production) seminar I clicked over to the Red Giant website to grab a link for one of my favorite little quickie DSLR tools: Magic Bullet Grinder. Grinder has always been a fast, one-stop-shop to prep and transcode DSLR media for editorial. After clicking around for a few minutes I was sad to see Grinder had disappeared.

Grinder’s demise probably happened upon the launch of Magic Bullet BulletProof. The good folks at Red Giant confirmed that Grinder is indeed gone. That is entirely understandable as BulletProof is a one-stop-shop data-wrangling and DIT tool for all things DSLR. BulletProof incorporates pretty much every feature that Grinder had so it might seem rather pointless for Grinder to still be developed. In fact Grinder development seemed to stop in recent years as the often asked for ability to transcode to Avid DNxHD never materialized. But in defense of the simple tool, I wish that Grinder was still available. It's legacy will live on as I'm sure the Red Giant engineers learned a lot from this little tool. 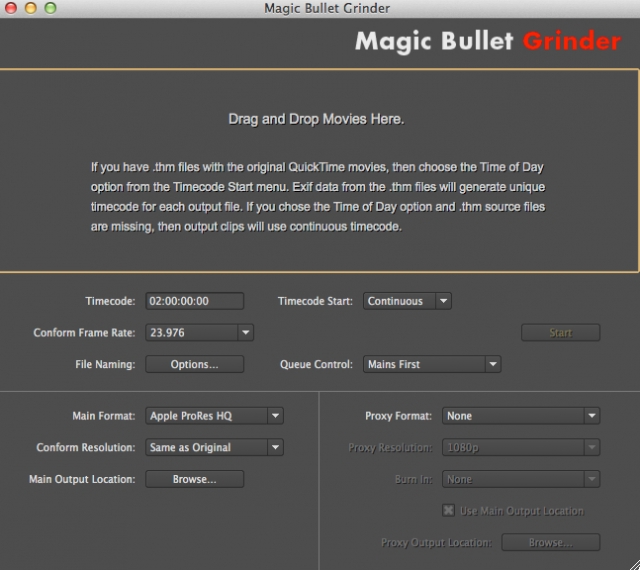 It was the simple interface that made Grinder such a pleasure to work with.

There’s something to be said for simple tools. Affordable tools that have a narrow focus often do their specific task better than more expensive tools that try to do many different things. Grinder was great at what it did: Throw a batch of H.264 DSLR clips into the interface and you could transcode to a flavor of ProRes fast and easy. If you preferred to add timecode or slow-motion and uprez your 720 59.94 footage it could do that too … fast and efficiently, for $49.

On the one hand the very need for something to transcode DSLR media seems antiquated what with both Final Cut Pro X and Adobe Premiere Pro’s ability to handle the native H.264 files without breaking a sweat. But on the other hand there are many editors (as well as post-production situations) where the reliability of a quality intermediate codec like ProRes is a good thing. If I have my choice I do prefer timecode-stamped ProRes over H.264 any day. Grinder did that fast, easy and affordably. 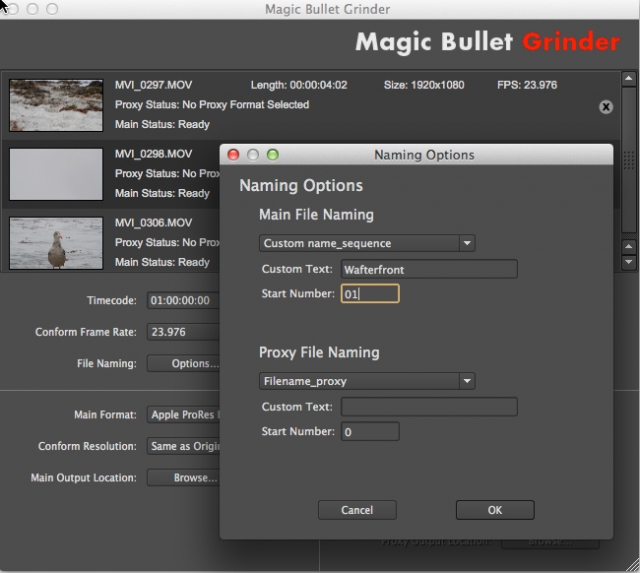 The built-in renaming function could save a step in the post-production process.

As for BulletProof, it is a great DIT / data wrangling tool that does many things well (It’s included in those conference sessions mentioned above) but for those of us working exclusively in post-production it might be a bit overkill. We often don’t need to add looks and metadata before hitting the NLE and we sure don’t need yet another copy of the media (since we should already have it backed up and on our RAID) which is what happens when using Bulletproof due to its Catalog way of working when it bring in media. Plus at $200 it’s a rather expensive transcode-only tool considering the past existence of Grinder. 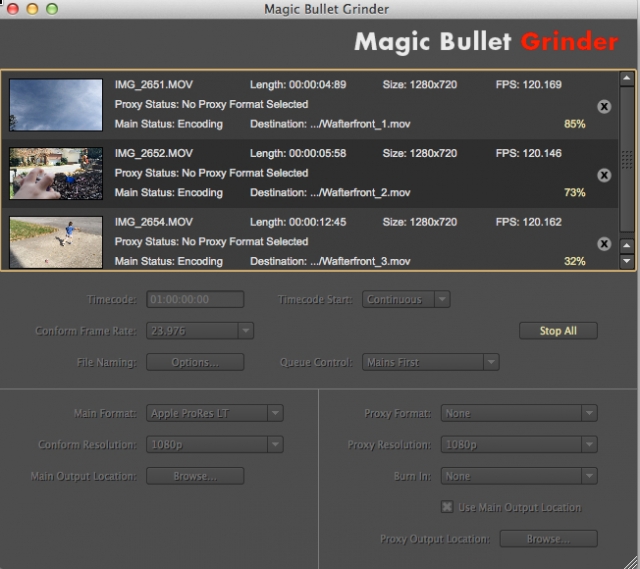 Grinder could transocde multiple clips at once making it fast. I've even transcoded some 120 fps iPhone video too.

There are a lot of other transcoding options these days if you it so the loss of Grinder won’t cause many to bat an eye but I thought it was worth mentioning as Magic Bullet Grinder has for years been a fast, affordable and reliable tool for the transcoding of DSLR clips. It has churned through hours upon hours of media for me so I didn’t want its passing to go unnoticed as I sure loved that little tool. Maybe Red Giant could just release Grinder as a free app now that its usefulness in the world has been diminished a bit. That would be a very nice thing to do. They already have a section on their website for free stuff!