I’ve seen this in stills and it’s very convincing. Next week I’m doing to do it in motion.

Traditionally used to create the illusion of impossibly deep focus, tilt-shift effects are now being used to do the exact opposite–with surprising results.

I read a lot of blogs on a daily basis, and my geeky friends do as well. Somehow, somewhere, someone stumbled across this little gem of a web site. Rather than using tilt-shift lenses to tilt the plane of focus horizontally to create greater depth of field, the lens is tilted so that the plane of focus is at 90 degrees to the plane being photographed. The result is a shallower field of focus than normal, and under certain circumstances our brain will perceive the result as a miniature.

When shooting miniatures we always use an enormous amount of light and stop the lens down as far as possible, usually to T11 or T16, in order to keep the entire miniature in focus. That, among other things, “sells” the illusion that the miniature is life size: in reality we’d perceive a full scale version of the miniature as being completely in focus because we’d have to be quite far away from it to see the entire thing. Apparently this trick works well in reverse: if we take a picture of a large object but reduce the depth of field to a narrow slice the picture appears to be of a miniature, because photographing a miniature without the use of trick photography results in a very narrow depth of field.

I’m shooting a spot next week with director Ian McCamey where we’re going to play this trick in moving images. A small Lego figure will be staring down at various large vistas that appear to be not much bigger than he is. As an example of how we plan to pull this off, here’s a test shot that I took from my balcony last week: 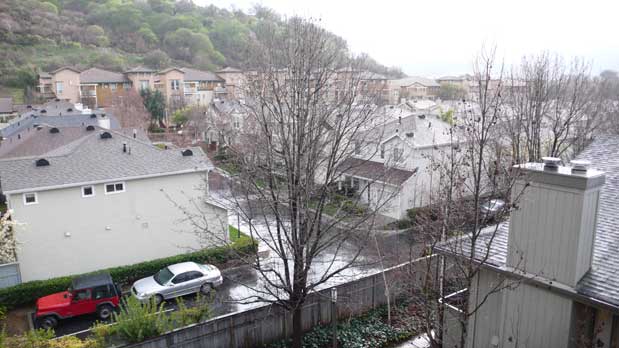 And here’s the same image after a little processing through Adobe After Effects: 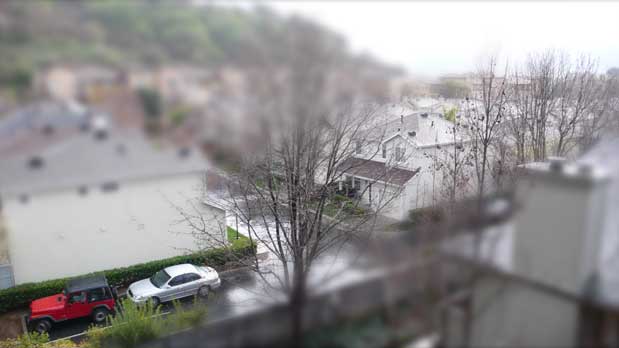 Rather than use a tilt-shift lens, which I don’t own and don’t have easy access to, I just created the same illusion by selectively blurring the image. The illusion works, but just barely. It helps to be much farther away so that there’s very little perspective. The tree in the mid-ground almost breaks the illusion, and the chimney, if it was in focus, would certainly break it.

I’ve not seen this done successfully in motion, and I love a challenge. Hopefully I’ll have something to show in a week or two.