Take a look at a few looks for lighting small scenes

Litepanels’ Caliber LED lights are a great option for shooters who have to light small scenes such as interviews, webcasts or product shots.

I had a chance to play with the 3-light Caliber kit, with an eye towards using them for lighting quick, mobile interviews that still need to look good. I found that the kit definitely gave good options for lighting a variety of small scenes in different ways. Let’s take a look at a few scenarios I put together in my basement, using my longtime, trusty sidekick, Gertrude. 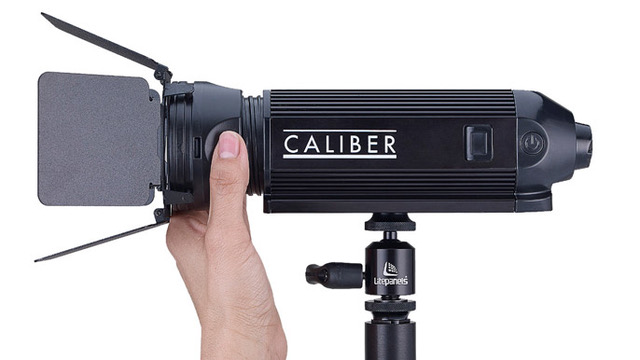 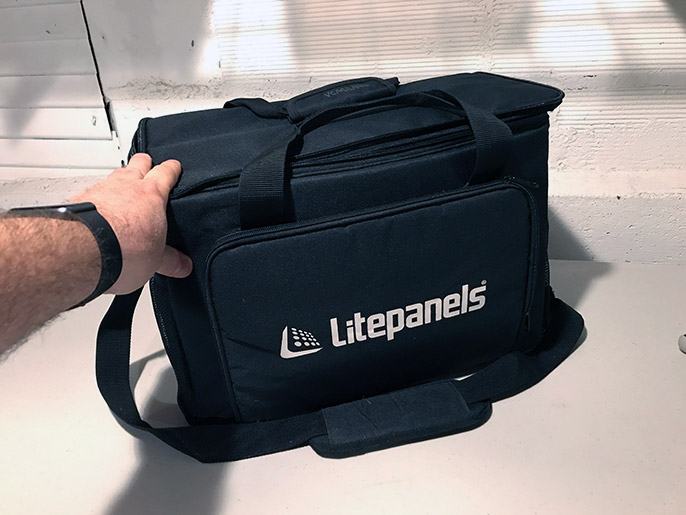 All packed up, the Caliber kit weighs 13 lbs, and is easy to manage on your shoulder.

And one thing to note: I used only the items included in the Caliber kit. The kit includes three small desktop stands for mounting light heads on a table or shelf, and one traditional lightweight stand that reaches 7 feet tall. So I only mounted one of my Calibers high on the traditional stand, and kept the other lights on the ground or a rolling cart. The kit doesn’t include diffusion or bounce devices, so even though I typically use these to soften light, I went without (with pretty good results, actually).

I set up my key light a couple feet above Gertrude’s eye line, at a traditional 45 degree angle, dimmed to around 80% and using the barn doors to flag spill light off the black background.
To give some separation from the background, I added an edge light on Gertrude’s shadow side, set up on a rolling cart I had nearby, and then dimmed it down to about 40%.
I had a third light available, and might have turned it into a traditional hair light high behind Gertrude, but didn’t have anywhere to prop the light up in my sparse basement, so I just stuck with two lights. 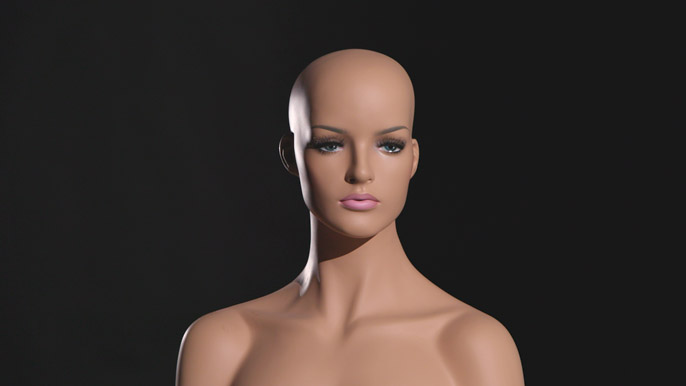 Next, I decided to use that idle third Caliber for a background light, positioning it directly under the table that was supporting Gertrude, and dimming it down considerably. I also focused the Caliber a bit towards its Spot settings to narrow the light beam a bit.
In this case, the third light is just putting a pool of light on a flat paper background, but the results would have been much more interesting on a real-world background, creating nice highlights and shadows across a 3D surface. 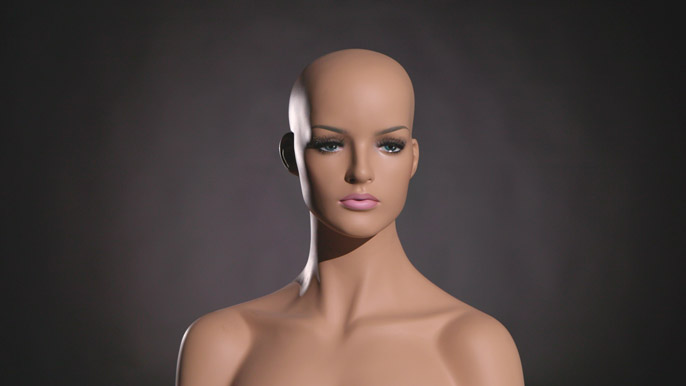 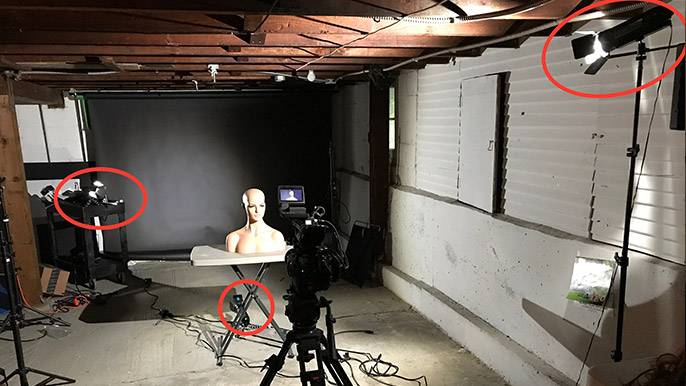 I really enjoy lighting backgrounds, and often use a few lights to do it, along with barn doors to cut each light beam. So I tried the same approach here, demonstrating the flexibility that the Caliber’s fresnel lens and barn doors give you for shaping each light. You can’t cut light like this with open-faced LED lights.

I also moved my keylight position from 45 degrees to right over my camera, to fill in all of Gertrude’s shadows and give more of a high key look. As a direct, undifussed light source, the Caliber looks surprisingly good. Of course, no living subject’s skin is likely to be as smooth and featureless as Gertrude’s, but still, the Caliber can produce a pleasing look, and you can always use diffusion to soften it. 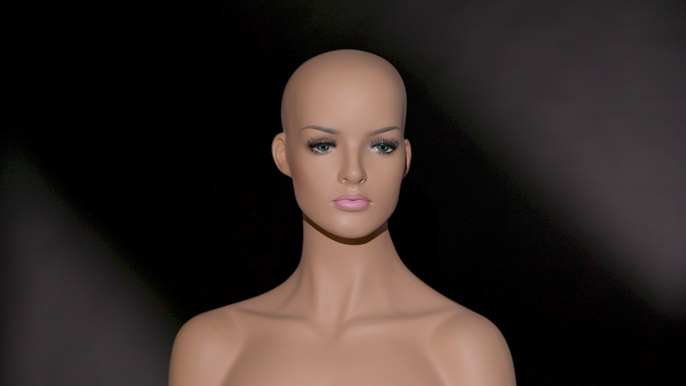 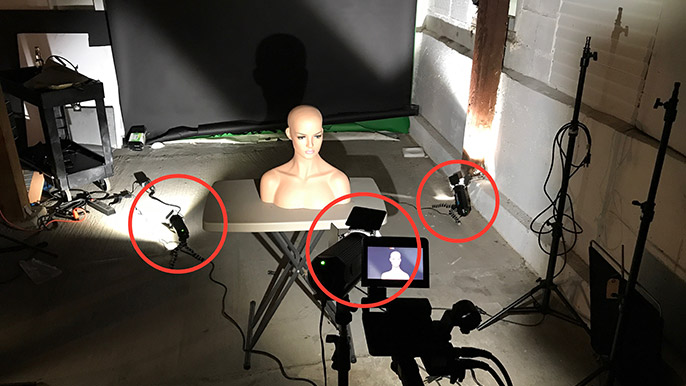 There’s always a client who wants a green screen shot, and the Calibers can definitely handle this as long as you’re not trying to light too big of a screen.
In this case, I moved my keylight back to its tradition high, 45-degree position, but used my two other lights in flood mode on the green background. I didn’t spend much time trying to perfectly even out the brightness of the screen, because any modern NLE keyer can work with small variations you see here. 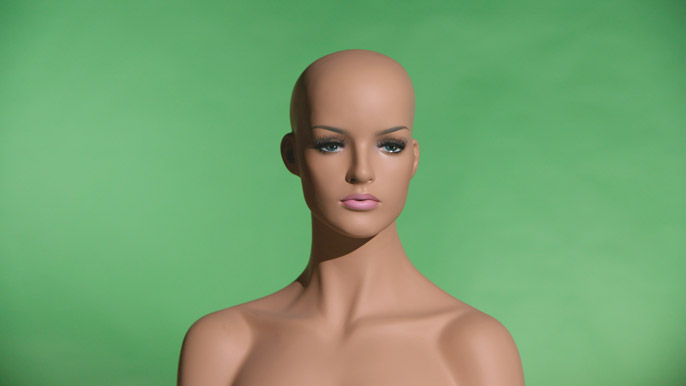 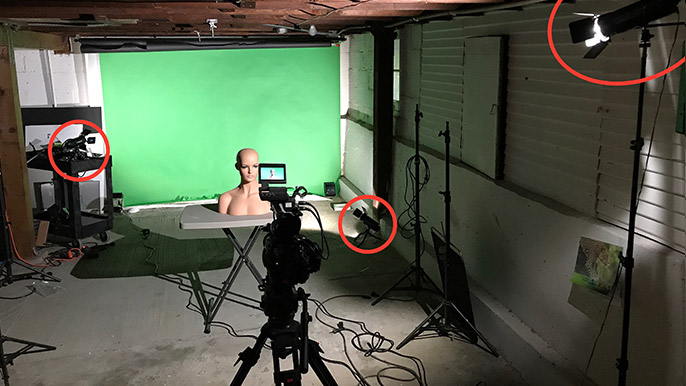 Overall, the 3-light Caliber kit gives you plenty of flexibility for small-scale shoots. You can get very good results just by sticking with the kit (as I did), but you can always add a few modest upgrades to kick things up a notch or two, such a second tall light stand, a little diffusion to shoot or bounce through, and possibly a 4th Caliber for more elaborate scenes.