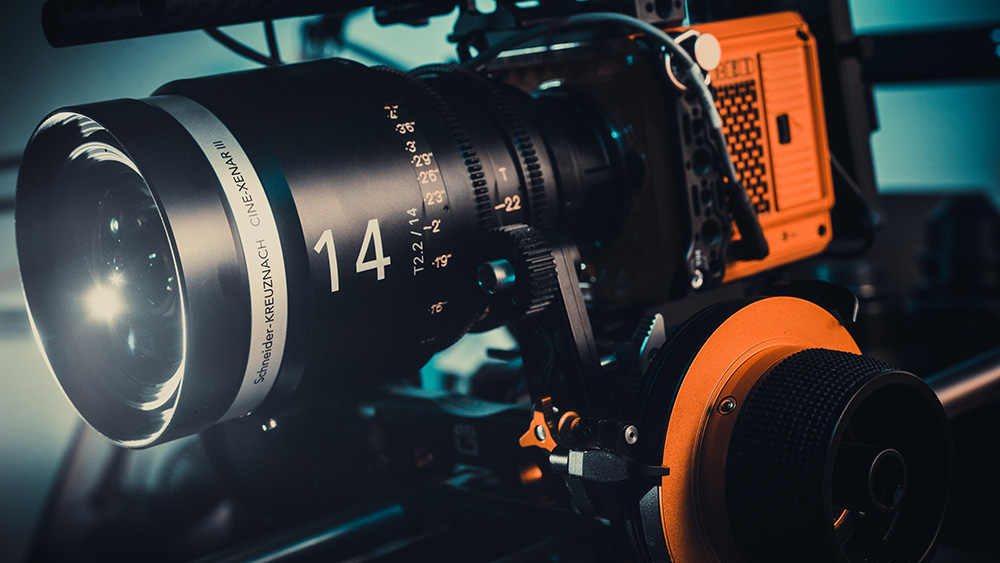 I was fortunate to pick up one of the first early orange models of Komodo in late spring of 2020. For the first few weeks after that, nearly every minute of the day people were asking all sorts of questions about the camera. What does it do? What does it work with? How can I rig it to film this? That curiosity was partly because of the mystery that had been surrounding the camera. President of RED Digital Cinema Jarred Land had been dropping teases all along the way to Komodo’s release. That’s also why my experience with it became a process of discovery to uncover just what Komodo does and what I could do with it. 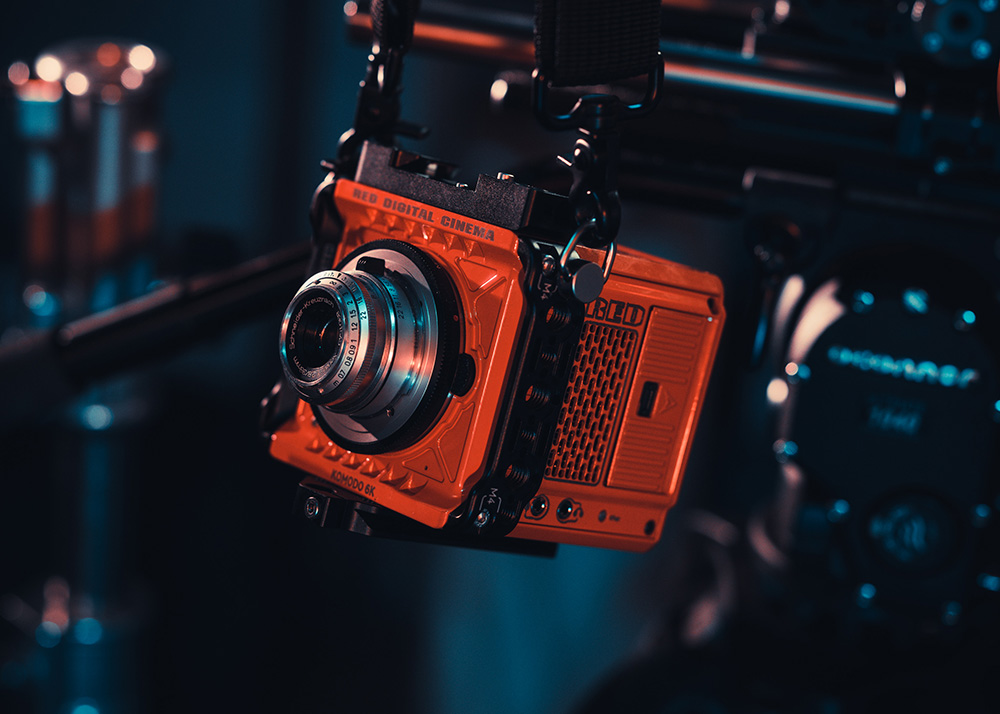 Once the full reveal occurred, things became a bit more solid, tiny, and very cubic in nature. RED Komodo is a 6K 40fps compact digital cinema camera. And when I say compact, I mean it’s essentially a 4x4x4 inch cube that weighs less than 2lbs with nothing on it. That alone wouldn’t be too interesting as there are small cameras out there, but there are a few things that set Komodo apart and put it in an alarmingly unique place in the professional camera market.

First and foremost is the sensor technology. It’s a 6K 17:9 aspect ratio high dynamic range global shutter sensor, which is a pretty new concept for global shutter tech in cinema applications. Previously, global shutter sensors had pretty low dynamic range and not-so-great color performance, which kept them off of sets. That’s not the case with Komodo, in fact it’s inheriting a lot of the advancements of it’s bigger DSMC2 camera brothers with some notable improvements as well. This sensor removes rolling shutter artifacts (jello cam) and is highly useful when filming handheld, action, gimbal, or similar fast motion. Equally potent is how it can remove strobing artifacts while also having a full image readout. That’s incredibly valuable for those syncing cameras together.

Not to get too technical, but Komodo’s sensor is a new design and with that comes a new Color Science Filter which also is designed for a very pleasing Highlight Roll- Off and natural color response. It also removes some optical artifacts well known to filmmakers when shooting at deeper apertures with bright sources. This is an achievement and opens up some wonderful creative possibilities. 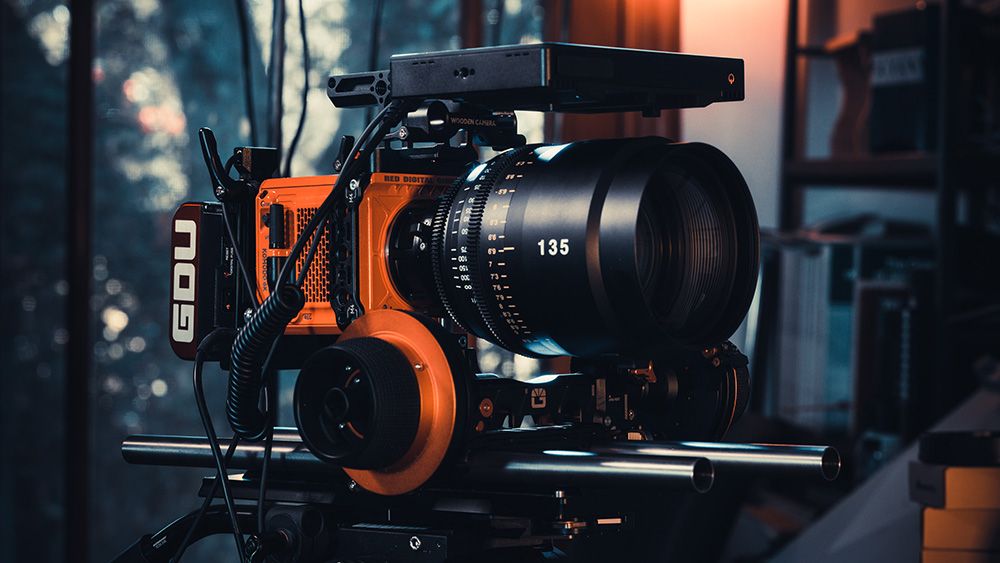 Beyond that, you also have REDCODE RAW recorded directly on board to CFast 2.0 cards, which are widely available and reasonably priced. REDCODE RAW is one of the most advanced RAW codecs in digital cinema and is compressed RAW to help keep file sizes down. That’s super sseful when filming at these higher resolutions. Komodo, like other RAW cameras on the market, allows you to window down on the sensor so you’ll have access to higher frame rates. Filming at 5K, 4K, etc. gets you there.

You can also optionally record ProRes 422 HQ and 422 in 4K and 2K scaling the sensor down appropriately for fast turn around work. At its lowest REDCODE RAW Compression Ratio (largest data footprint), you’ll be rolling about 1 hour of 6K per 1TB of data. Even then, you can still tweak your REDCODE RAW Compression Ratio if you need longer roll times on a given media card. 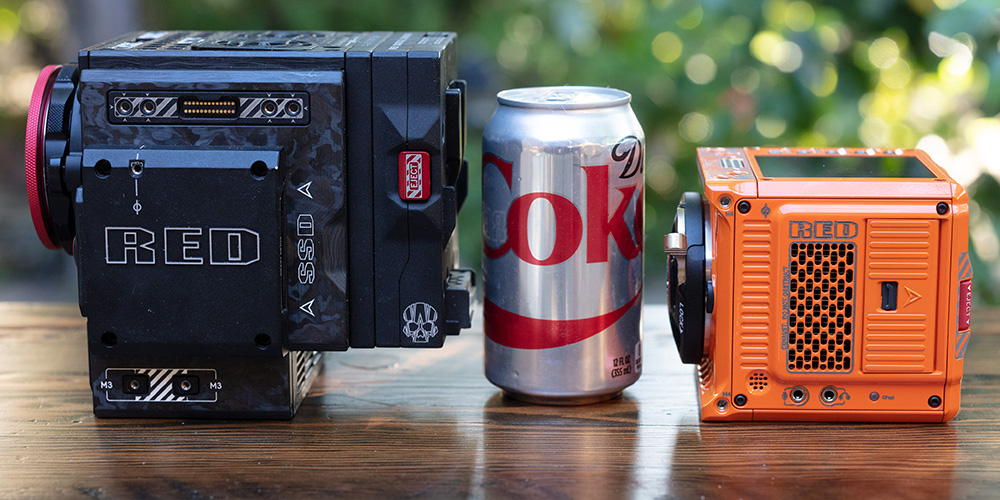 Komodo also uses Canon’s new RF Mount, which was introduced with Canon’s mirrorless cameras. This is a shallower flange depth mount and you can adapt many, many different types of lenses straight into the mount using various adapters and even Speedbooster/Focal Reducers. Most commonly I’m using RF>PL adapters to use lots of PL cinema lenses on Komodo.

Tapping into more Canon tech, Komodo has two slots on the rear for Canon BP Series Batteries and that leads to one of the camera’s biggest super powers: it has an incredibly low power draw. A single BP-975 battery will keep Komodo running for about 2 hours and 15 minutes. And with two slots you can run longer and even hot swap while rolling.

For those looking for longer run times or just hoping to use V-Mount or G-Mount batteries, there’s a host of adapter plates that enable you to use those bigger battery bricks on Komodo. This is particularly useful if you’re looking to attach onboard monitors, focus motors, audio preamps, or other accessories and powering via D-Tap for instance. With a typical 150Wh V-Mount just powering Komodo, the camera can stay on for about 6 hours and 15 minutes, which is insane for a camera that films this quality of 6K material. 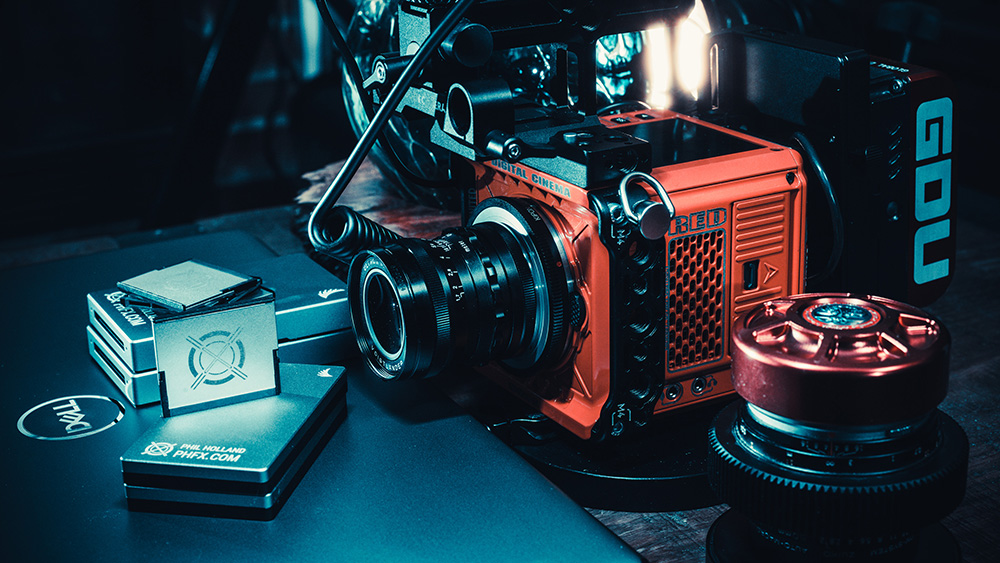 That pushes me into another interesting feature and something important to talk about, monitoring. Komodo is a small camera that features a 12-G SDI port to allow for 4K monitoring, which is a growing trend on set these days. It’s also really useful if you are perhaps going to an external recorder to roll backup proxies or similar workflows.

On the top of Komodo is a small and bright touch screen. You can use just that or just the camera’s menu buttons to navigate through the menu. If you’re trying to keep the camera very small, it is indeed possible to film with just the build-in display, especially if you use the built-in focus assist tools like Focus Peaking. But there’s another hidden feature in there, as Komodo straight away supports wireless monitoring as well as camera control through a free app called RED CONTROL. This connects via adhoc WiFi and you connect your table or phone.

Honestly, I was alarmed and pleasantly surprised at how low latency the connection is. I don’t know if I’d pull action focus with it, but you can certainly setup a shot, ensure proper exposure, and handle critical focus.

Focus is another area where Komodo has some new tech. It features Phased Detect Autofocus technology but and using Canon EF to smart RF>EF Adapter or by directly tapping into native RF Mount lenses, you have the ability to autofocus and track subjects. This opens up some electric wireless or even wired focus control possibilities. Canon is quickly releasing new and rather impressive RF Mount lenses and, of course, they have a large library of EF lenses that support AF as well as 3rd party lens options from Sigma and similar companies.

One surprising discovery, which is actually very surprising, is that Komodo is the quietest RED camera to date. And I mean quiet enough to use compact on board microphones right on the camera.

To me, this opens up some many new possibilities for documentary filmmakers, interview shooters, ENG, and for other content producers that need to get clean and good quality audio. The camera is small, so full-size XLR isn’t there, but there’s a headphone jack for monitoring. What you can do is feed the 3.5mm jack audio and have gain control within the camera. However, where it gets far more interesting is pairing it with a field recorder for double system sound or using one of the many small Pre-Amp or Pre- Amp Mixers to just have more control as well as Phantom Power for professional-level audio. 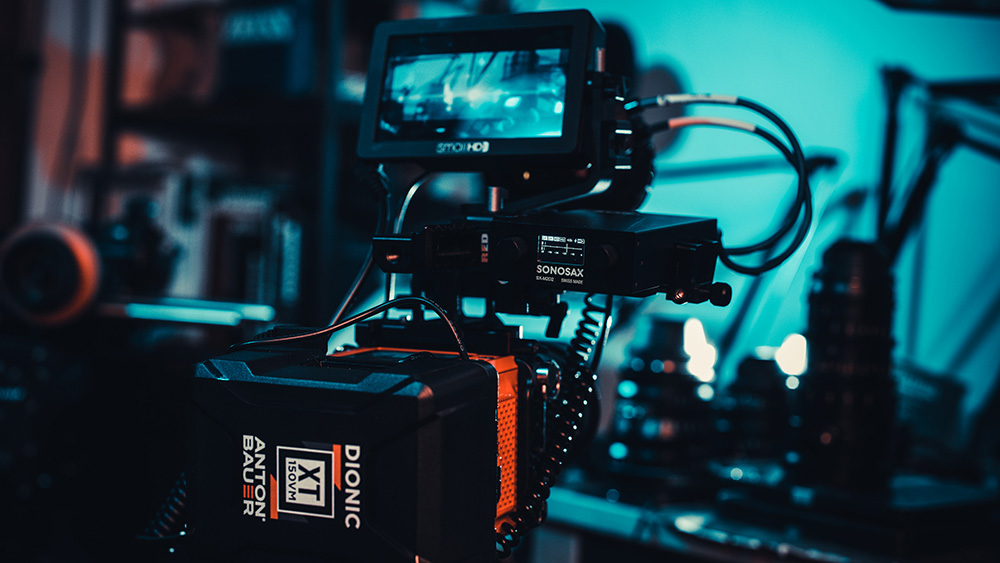 Because Komodo is so new and very different from all of the other RED cameras released to date, I’ve often been asked what is this camera for. Can it be used for A-Cam? How would I even describe it?

When you add up all the features, this is a compact digital cinema camera that enables a “choose your own adventure” approach to filming. It’s clearly positioned as a utility camera with that global shutter sensor, and that’s perfect for filming fast action and certainly any sort of POV or hard mounting rig. But the size of the camera, as well as the low power requirements, should inspire travel and natural history filmmakers. When you add all of that to how quiet it is, you can envision documentary filmmakers falling in move with this camera, as they’d be able to use it in tight quarters and not feel like they aren’t capturing the moment.

For me, all those possibilities are on the table with this camera. You can rig a whole package in a shooting capacity in under 4lbs with lens and a battery. You can build it up from there as you want to add capability. I’ve certainly said once or twice that it’s nearly impossible to make a large camera small, but you certainly can rig a small camera larger as you see fit. And that’s where Komodo’s perhaps biggest strength is. It’s small and inviting you to take it with you whatever you’re doing.

My travel kit with a few lenses, filters, media, and a 5” SmallHD display is a tiny shoulder bag. It works for Run and Gun filmmaking, can be rigged to a fully capable A-Cam with accessories to get timecode into the camera, sync, and external control for more technically demanding rigging. I find myself going between using things like the Wooden Camera Komodo accessories to add a top handle and ARRI Dovetail quick release as well as rod support with larger V-Mount batteries to power external larger monitors, or quickly rigging it down to just the Arca quick release and a set of travel sticks. Heck, I sometimes wear it around my neck since it’s so good at handheld.

That’s how Komodo has inspired me and how I’ve been using it so far. Hopefully, this can inspire you to figure out how it might outfit your kit. 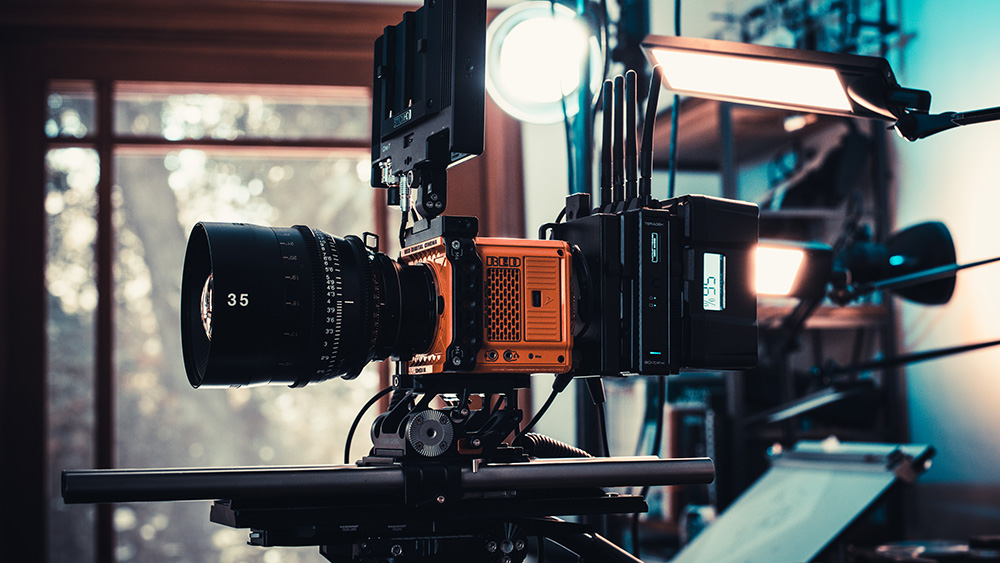