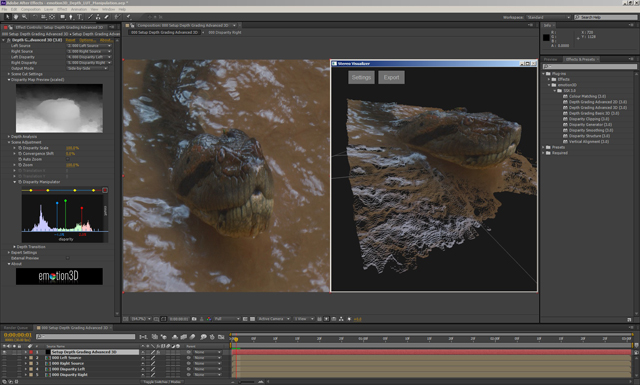 emotion3D is proud to announce the upcoming release of the third version of its award-winning suite of plugins for Adobe After Effects on December 18th, 2012.  The Stereoscopic Suite X3 for Adobe After Effects features numerous critical improvements for working with stereoscopic material, providing the functionality and interactivity that production and post-production professionals need to make SSX3 a pipeline foundation.   To commemorate the release of SSX3, emotion3D is offering 25% off the price if purchased prior to December 31, 2012.

New functions available in the SSX3 include automatic stereoscopic color matching, improved disparity map generation and depth budget adjustment tools, as well as numerous optimizations resulting in render times being reduced by as much as 50%.

Key new features of the SSX3 include :

Powerful yet affordable stereoscopic tools are increasingly in demand as an industry-wide decline in budgets contrasts with the high quality requirements for stereoscopy in order to ensure viewer comfort.   With a ubiquitous host such as Adobe’s After Effects, emotion3D sees significant opportunity for small to mid-size production and post-production to compete for stereoscopic projects, without major investment in hardware and software.  The large number of artists already familiar with After Effects means easier access to artists and less training for those new to stereoscopic workflows, all of which in turn reduces the upfront costs for post-production facilities.

Says emotion3D’s CEO Tom Wilson, “It’s a game-changer. With the release of SSX3, the broad toolset previously only found in stereoscopic finishing systems is now available for After Effects for less than 10K USD.  We expect that this will usher a new era of stereoscopic production, serving to democratize what was once a very specialized niche.  Whether for visual effects, finishing or simply assuring that material fits the required depth budget, SSX3 will serve as an invaluable part of any post facilities’ toolbox.”

emotion3D’s SSX3 plugins will be available for download on the emotion3D website www.emotion3d.tv as of the 18th December 2012.  Pricing is set at €7795 per license, with annual support and maintenance contracts available by contacting emotion3D at [email protected] or via emotion3D’s worldwide network of system integrators. A discount of 25% is applicable to purchases prior to December 31, 2012.

emotion3D GmbH is a high-tech Austrian company that serves the 3D film industry with powerful solutions for editing shot 3D content. Its award-winning Stereoscopic Suite X is used internationally by 3D post-production teams for depth grading, fixing rogue parallax, remastering for different targets and converting stereoscopic 3D content to “glasses-free” 3D display formats.  emotion3D is supported by the impulse program, distributed by the Austria Wirtschaftsservice GmbH, and receiving funding from the Technology Agency of the City of Vienna (ZIT).