A multi-month case study of the Field 2 mobile system 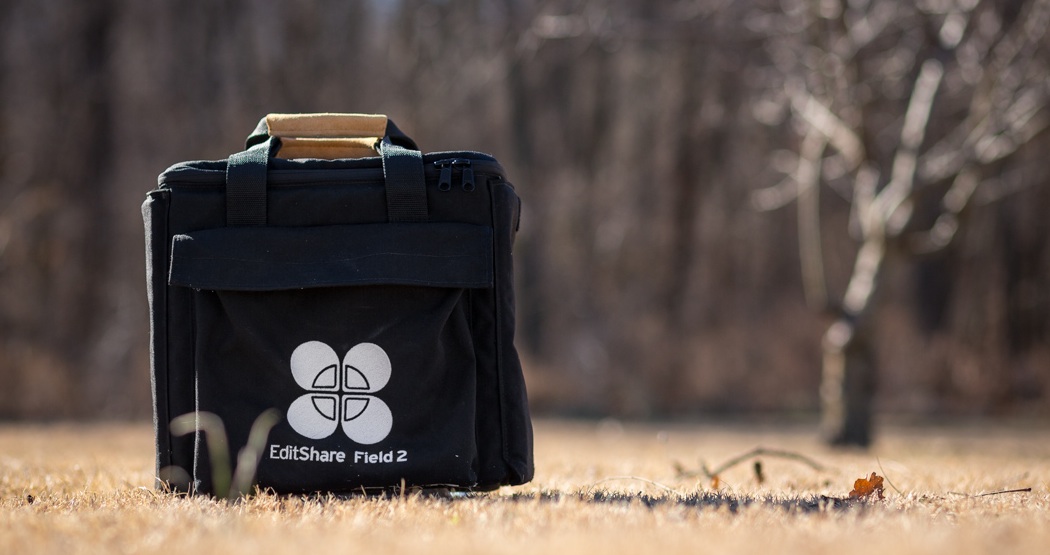 Last fall I produced a large video project for a large youth summer camp based in the Ozarks. This organization offers an intense multi-week program for kids of all ages. My Arkansas video production company was hired to shoot and edit a number of video assets to be used in the camp's marketing efforts for the following season. Thanks to an existing relationship with Editshare (they have assisted FreshDV's NAB coverage in the past), I had the opportunity to work with a portable Editshare Field 2 unit throughout both production and post on this project. I wanted to talk about how the Field 2 fit into our workflow in this case-study. 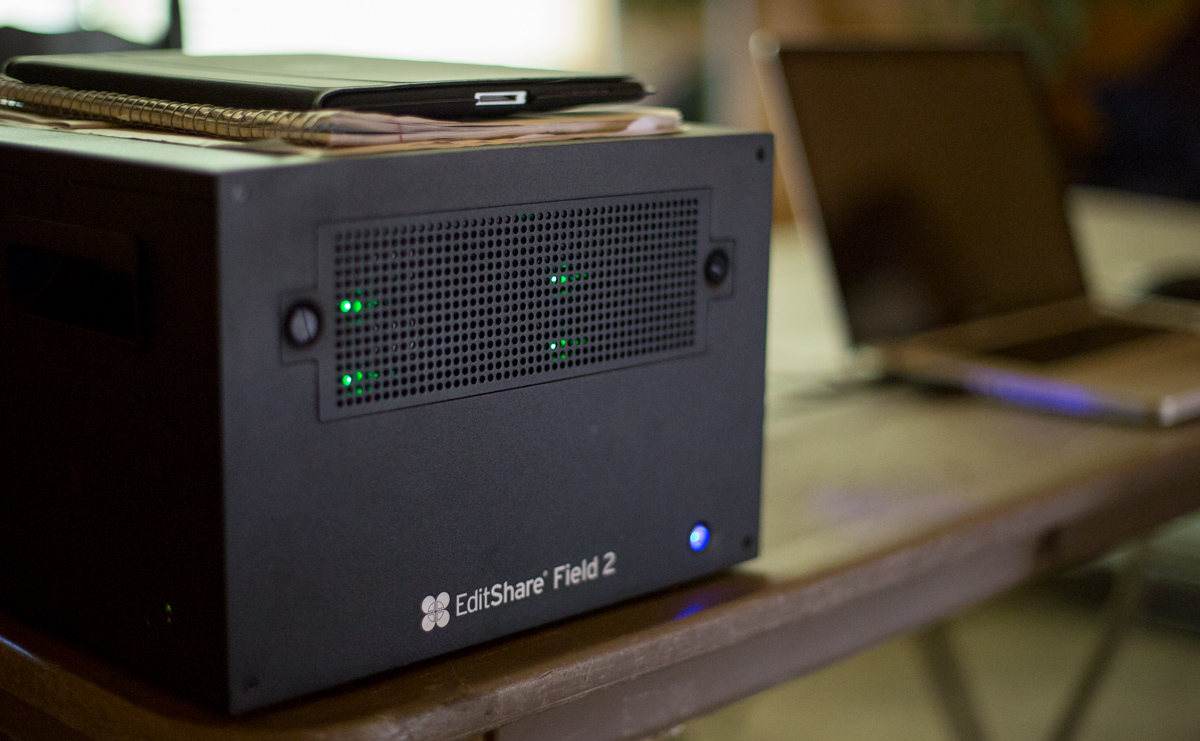 In this article, I'll mainly be discussing how we used the Field 2 storage system on-location for production and acquisition. Nashville-based Scott Simmons was my editor on this project; I recommend that you also read about his post-production experience with the Field 2. I knew going into this project that media management was going to be quite a task. The schedule called for 3 weeks of shooting onsite at the camp, followed by nearly a month of post-production. Deliverables for this project included a 20-minute marketing promo that encompassed all areas of the program (which features over 120 unique activities), as well as long-form interviews and staff recruitment pieces.

In total, we had ten deliverables for an aggregate of around 40 minutes of tightly finished video. The main promo piece itself had over 800 clip events on the timeline, and we ended up with over 5000 individual clips in the project. Complicating matters, we were sourcing footage in several different formats: Sony FS100 and FS700, Canon DSLR, GoPro and also using existing DSLR and HDV footage from the client video archives. 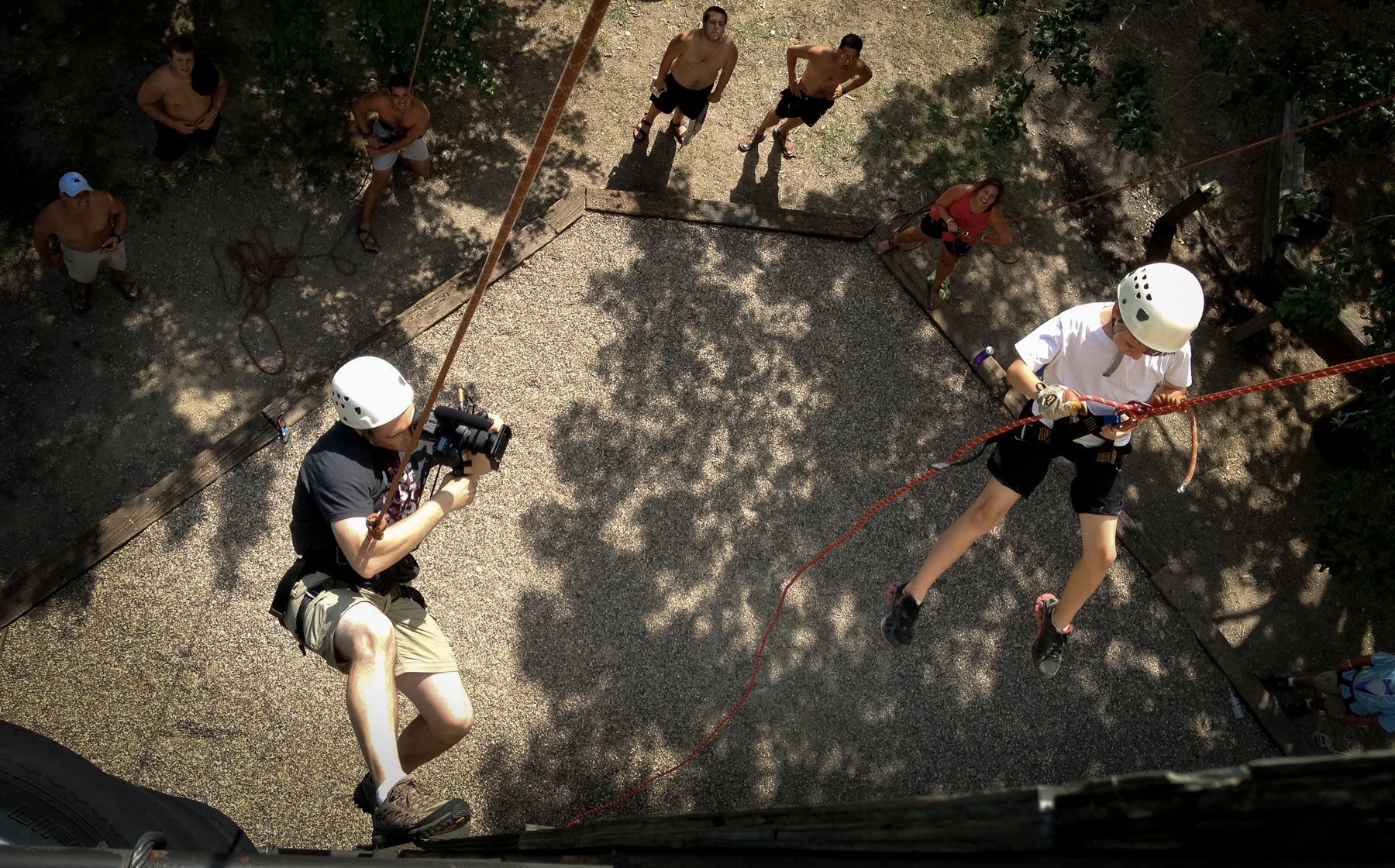 The reason for the disparate formats was because this project was so extensive, and the shot list was so varied. We had a lot of POV type coverage needs from the GoPros…head and body mounted on campers on rope courses and canopy tour ziplines 100ft in the air, out on the lake on wakeboarders, etc. We also shot quite a bit of FS700 slow-motion footage, to add an element of drama to key moments and activities. The FS100 was used for interviews and a number of low-light after dark events (like flashlight tag). Beyond those formats, we used DSLRs extensively on a Glidecam and also handheld in all sorts of situations. Basically, the needs of the project were so varied, it could not be served with a single camera system. So we had quite a grab-bag of camera tools, which resulted in a grab-bag of acquisition codecs. 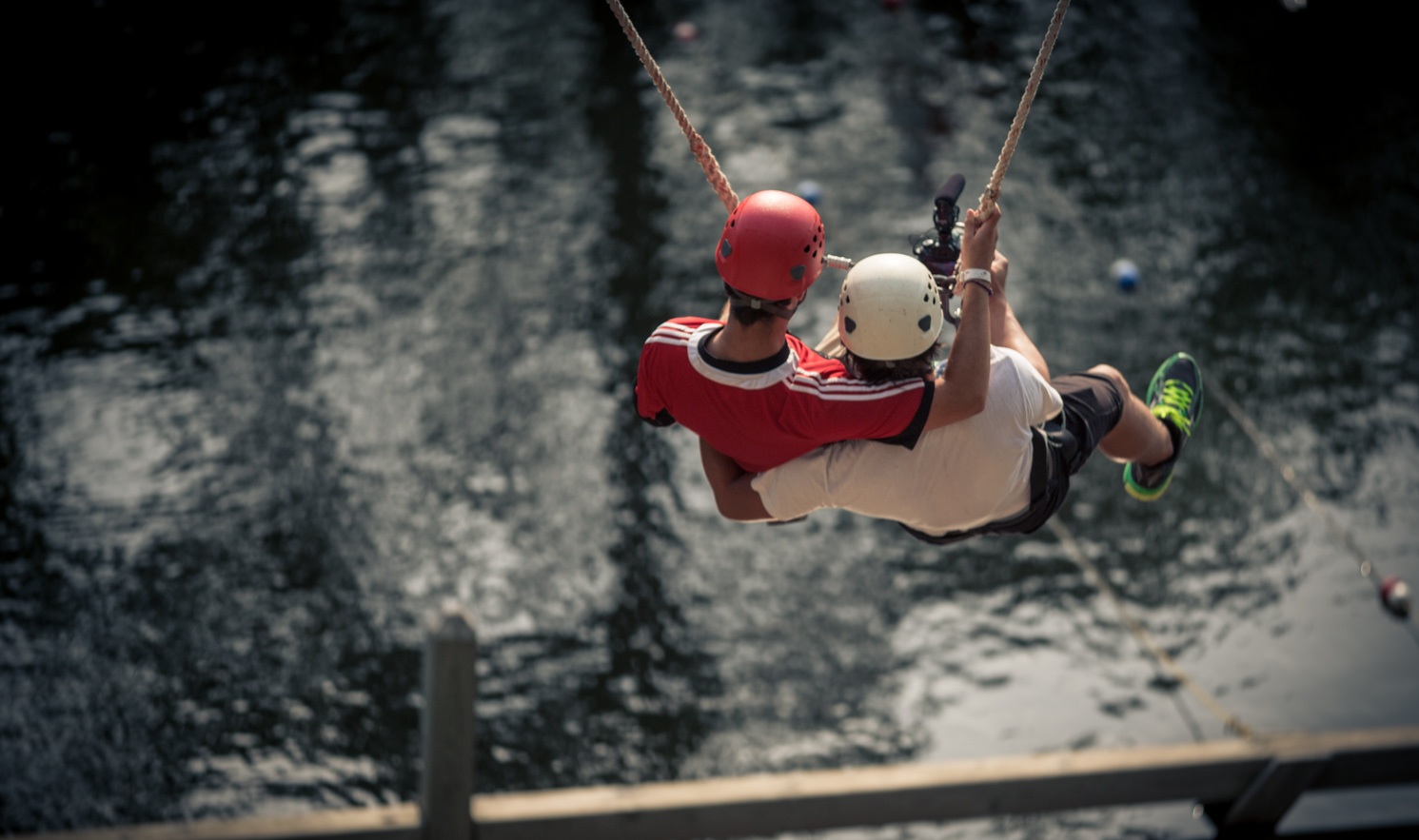 Our Editshare Field 2 system came equipped with 6TB of usable storage capacity in a fault-tolerant RAID5 configuration. This was more than enough for our anticipated storage needs of approx 1-2TB raw footage + another 2 TB for ProRes transcodes. We were going to use Adobe Premiere CC for post, so I could have chosen to stay in native formats. However, after many long discussions with Scott, we decided to transcode everything to ProRes LT as our baseline codec.

Why ProRes LT? Because it holds up surprisingly well from DSLR and similar sources (with some exceptions in high-detail moving shots), and is a reasonable compromise between quality and filesize when coming from highly-compressed sources. And with the project ultimately going to web (and likely to be viewed at 720p or below), I was confident it would hold up just fine. We had time in our schedule onsite in the evenings for this transcode to happen, and we felt that taking everything to a common codec was probably the safest option. Premiere Pro was already going to be working hard on the long-form portion of the edit, and we didn't want to add any unecessary variables that could cause issues. The delivery deadline was of critical importance, so transcoding everything to ProRes was really just a safety measure. Thankfully, everything went smoothly for the most part. Scott actually talked about some of the post challenges on this project in his extensive review of Premiere Pro CC.

The plan while we shot onsite at the summer camp was to do daily DIT media dumps to the Editshare, and then (as time allowed) to do transcodes from all the different native formats to ProRes. We had a Macbook Pro and an i7 iMac onsite for dumping and transcoding. While the Field 2 can be optionally equipped with 10Gig ethernet, we were working with the four standard Gigabit connections. Gigabit ethernet is not the fastest storage interface, but absolute speed was not my priority on this project…I needed reliable shared storage first and foremost, and access to all of our media on demand.

The client had specific guidelines on key moments that were essential to the main promo piece. To complicate matters, many of the camp activities we were tasked with capturing were scheduled to happen only once over the course of several weeks. It was essential that we knew what had been shot at all times, and what needed to be shot on a day-by-day, and sometimes an hour-by-hour basis. If we missed a specific activity or shot that the client had pre-identified (and there were hundreds!), it would have cost me dearly in makeup shoot days. Having access to the media pool from all of our systems was one way we were able to stay on top of this. 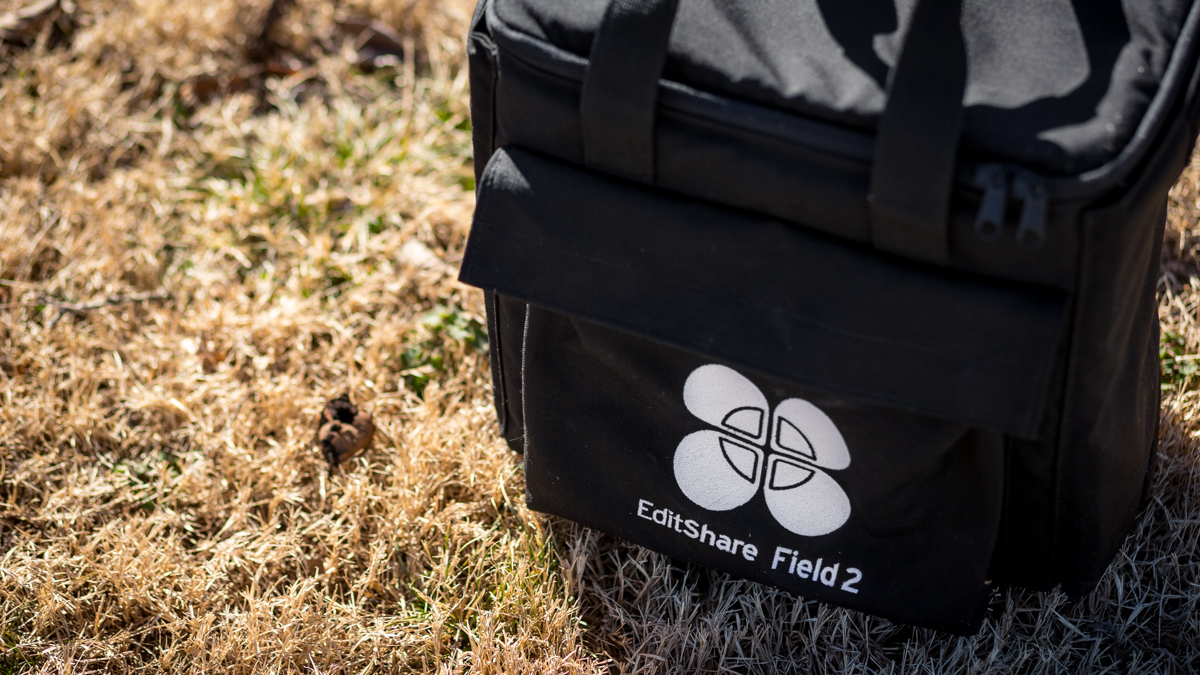 The beauty of the Editshare Field unit is that multiple machines can connect and access the same media using standard ethernet cabling. Once you are setup on each machine, you can effortlessly mount and unmount the shared storage as needed, and everyone has access to the same pool of media. There are many other features available (such as project file sharing/multiple editors access) that we simply didn't make use of on this particular project…the biggest benefit to us in this case was access to a large chunk of fault-tolerant storage from multiple machines…somewhere out in the remote Ozark hills. The Field 2 will do much much more, for a full list of features, see this PDF spec sheet.

Our Field 2 unit was equipped with four drives and 8TB of storage (which yields around 6TB usable space in a RAID-5 configuration). We split the 6TB array into two separate storage pools, for raw and transcoded media. This was very helpful from an organizational standpoint, when running multiple batch transcodes from multiple machines. Being able to keep the raw and transcoded media on separate volumes was mentally very helpful. And a neat thing about Editshare storage volumes, is that you can dynamically expand or shrink the size of each volume from the RAID array control panel. Handy. 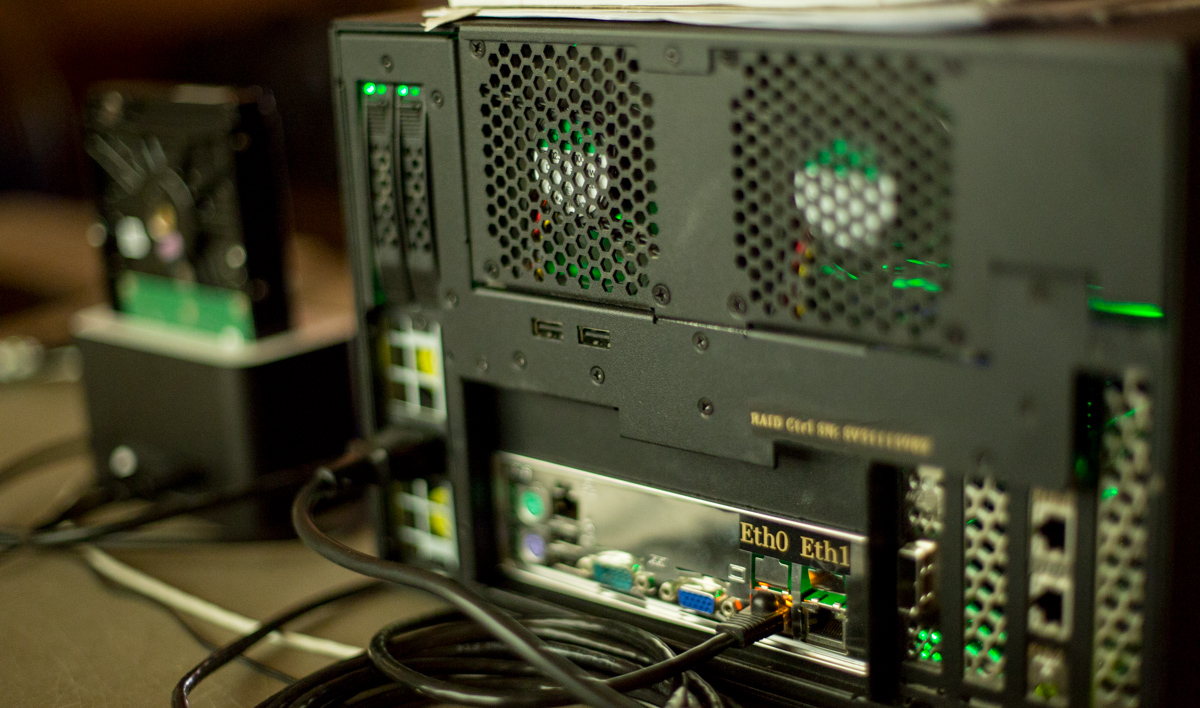 I found that the unit is slightly noisy when operating, as cooling fans run continuously. If you are using this on-set, you'll want the Field 2 to be located where ambient audio isn't a concern (like video village). It's also a bit loud to be editing right next to, so having the option of running long gig-ethernet cables to the unit is a nice thing. Once it's up and configured, there is no need to physically touch the device, as all management is handled remotely through a VNC client interface.

The Editshare Field 2 was provided with a lovely soft case with a padded handle that zips up neatly around the unit, offering protection while still being very portable. As you can see in the following snapshots, the case actually offers velcro panels and ports that allow you to plug in and use the unit while still protected in the case. It's a really clever carry case custom-built by PortaBrace, obviously they built this system to be mobile with a minimum of effort.

While shooting onsite at the camp, we used the Editshare primarily inside our DIT workstation office area. Throughout the day and each evening, we would dump media cards to the Editshare from both machines. As daily footage dumps were completed, we would then batch transcode raw clips to ProRes files. Having both machines available to split up the transcoding tasks was incredibly helpful. And from an organizational standpoint, it was a Big Deal to me that I could access the same pool of media on both machines. With so many different files, formats, and activities coming in on a daily basis, it was a torrent of footage. And I needed it somewhat organized in advance, so that Scott wasn't absolutely screwed once he dove into post-production. I needed him to be a creative editor, not buried in transcodes, import dialogs and bin organization.

Once acquisition on-site was wrapped, and complete footage backups had been made to external hard drives, I shipped the entire Editshare unit to Scott in Nashville. He then edited directly off the Field 2 system for the next month or so. This is probably something of a non-standard usage of the unit…I imagine that Editshare would recommend that the Field 2 unit be brought back into a post-facility, and footage offloaded to a larger installed Editshare system. Regardless, this workflow functioned beautifully for our needs. Ultimately, using the Editshare Field 2 on this project freed us up to concentrate our efforts on shooting and editing, instead of managing storage and sharing media. And that is a beautiful thing.

Editshare Field 2 systems are essentially configured and sold as build to order units, but I'm told that 4TB units run in the neighborhood of $10,000, and 8TB units closer to $15,000. For questions or more info on the Field 2, contact Editshare.