I let myself get sucked into a click-bait blog article the other day and it got me thinking about what I had done. It was click bait for a number of reasons but the actual content of the majority of the article was a decent summary of the non-linear editing tools we have available. With a title like What’s the Best NLE Software for Professional Movie Editing? you know it might likely do downhill from the first click.

The article came from a learning resource called Lights Online Film School and since it was a resource I had never heard of I guess the article achieved its purpose of getting their name and their website out there. I used the term click bait above and that’s, for the most part, a derogatory term and I think that might be a little harsh for the Lights Film School Filmmakers Blog overall as they have quite a few good articles there that aren’t click baity at all and don’t have sensationalist headlines. 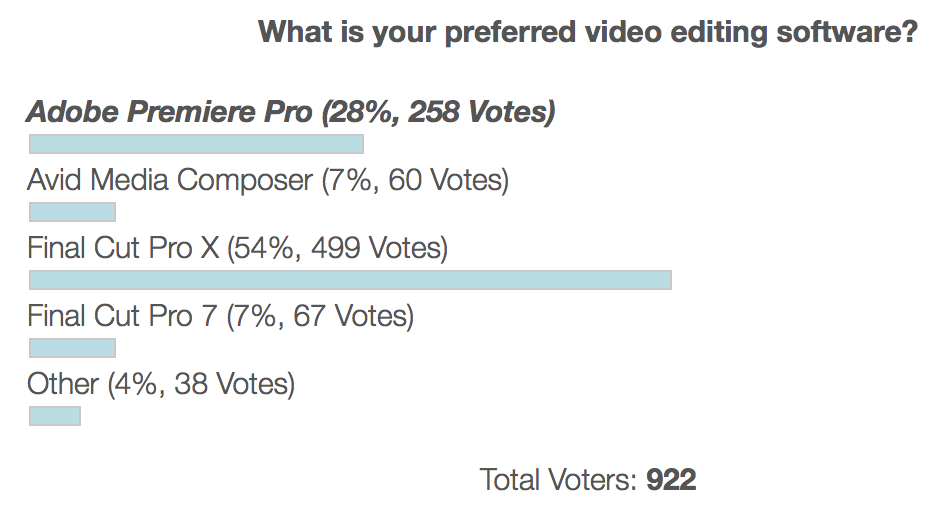 But we’re discussing the What’s the Best NLE Software for Professional Movie Editing? and while the article itself might not be click bait material the headline surely is. I say this because it is absolutely impossible to answer the questions of ‘what is the best NLE software for professional movie editing’ in the 1500+ words of the article. They actually do decent job of summarizing the high points of the different NLEs but where the piece devolved into click bait material was the survey included at the end. It asked What is your preferred video editing software? with the options to click for an answer.

While the survey question was different from the article’s title (and both questions are two very different discussions) I just want to ask what good does a survey like this do for the overall discussion that we seem to have ad nausem about our NLEs (hand raised as being guilty of contributing to the nausea)? And how accurate a survey of the NLE tool landscape is such a survey?

I think the answer to the latter question is not accurate at all. While the NLE makers don’t release sales figures it’s safe to assume several things when looking at such a survey:

• A large majority of feature film, episodic and reality television editors (who make up most of the Avid Media Composer market) aren’t reading and responding to blog surveys

That last bullet point is worth expanding upon. I long ago abandoned several of the Internet forums that I used to participate in (that’s a conversation for another post) in favor or more targeted, private conversations like mailing lists or closed groups. Looking over all of those groups and lists that I frequent for the last few days I saw no mention or link to this survey on any of the Adobe Premiere Pro or Avid Media Composer groups but several on the Final Cut Pro X groups. If you did see this survey promoted in an Avid or Adobe thread please let us know in the comments below as it’s probably a group I’d like to follow. Does this mean that Avid and Premiere people don’t care about their preferred tool winning a survey? Or that FCPX people still feel the need to defend their tool amongst all the others? Maybe some of both but a lot of it goes back to the pro-Apple phenomenon where Apple lovers/users in general will take a lot more time and effort to champion their Apple tools than any other brand out there. They’ll also take a lot more time to defend it.

As for the question what good does a survey like this do for the overall discussion? The answer is nothing because a survey like this will never represent a true sampling of all the users of all the NLEs out there. Is it all in good fun? Sure but it takes so much more to choose the proper tool beyond seeing what group of users clicked and reclicked a survey more than the others.

A comment from Lights Film School in the article discussion kind of sums it up:

Such an interesting discussion! There’s clearly a groundswell of support for FCPX, here. … We’ve done our best to clearly present the pros and cons of each NLE option, drawing on research and firsthand experience in equal measure. The poll results to date are fascinating.

I’m not sure fascinating is the word I would use. Skewed is more like it.