What do an iPhone 4s, a Sony Cyber-shot point-and-shoot camera, a JVC GY-HD250, the Canon HV20, a Convergent Design nanoFlash HD recorder, and a Panasonic AG-AF100 camera have in common? These five different video recording devices have been used to produce footage for the green documentary La Casa Ausente (The Absent House), which tells viewers about the first 100% sustainable house built in Puerto Rico and the work of its designer.

The Absent House —known in Castilian as La Casa Ausente— was designed by Architect Fernando Abruña Charneco, a disciple of Buckminster Fuller, the inventor of the Geodesic Dome. The house uses solar and wind energy to power all of its electrical needs. It harvests rainfall to satisfy all its water necessities and furthermore it converts human wastes into fertilizer in the three compost toilets it houses. It is what many call a house that is off the grid. In this article we’ll discover and discuss the many recording devices, formats and códecs used in the production of an ecological documentary over a period of 5 years, and how its producer (and a good friend), Rubén Abruña, handled them.

The project started as a short documentary about the house itself.

and it slowly evolved into a bigger project because I realized that the Architect’s green vision was expressed in multiple ways and so I needed a longer format to develop them. 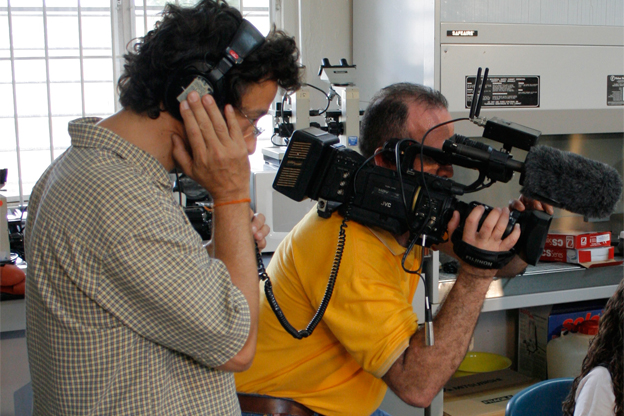 Five years ago when Rubén began the project, he owned a JVC GY-HD250 camera. He was recording a 1280×720 at 25fps progressive HDV signal onto Mini DV tapes.

At that point the camera was one of the best in its league capable of outputting a progressive and full-raster HD signal.

It worked well for what I was doing at the time, but the noise was something that I was not satisfied with, especially in images with foliage, a very common visual in an ecological documentary like La Casa Ausente.

To solve this problem, Rubén decided to expand the capabilities of the JVC GY-HD250 camera by outputting directly into a Convergent Design nanoFlash HD 4:2:2 recorder via the camera’s HD-SDI output. Although the HDV format and the nanoFlash both record using the MPEG2 códec, with that move, Rubén was introducing a new format (XDCAM HD metadata) and wrapper (.mov). He kept recording HDV onto Mini DV tape but as a backup, but fortunately he never needed it. He was happy about this because it would have lowered the quality from the nanoFlash’s 125 Mbit/second recording he was using, to HDV 720p’s bitrate of about 19 Mbit/sec data rate (for the video).

The difference in the foliage was astounding. The mosquito noise was swatted out for good. 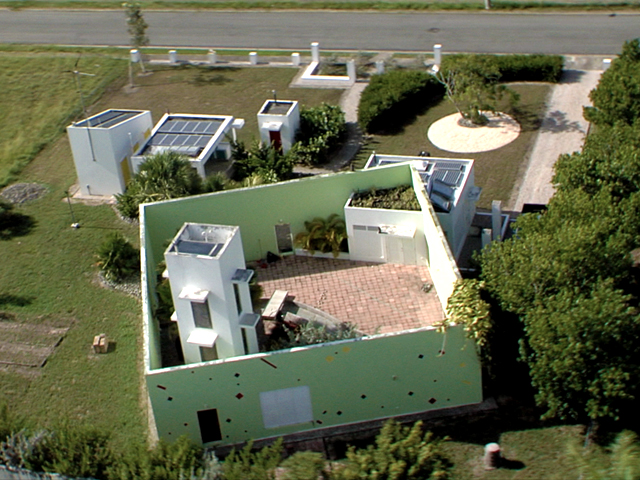 They shot all the aerials with the JVC GY-HD250 but always outputting to the nanoFlash.

By then, the second of this five year journey, I was committed to a longer project, so I felt that I needed to maintain a professional quality level throughout. It was a new experience for me to record on cards which forced me to become even more rigorous in labeling, identifying, and having multiple back ups. You know that poster in Terry Gillian’s movie Brazil that reads “Paranoia breeds confidence?”? Well, that was my motto with backing up my media. At this point, where I am almost finished with the movie, I have three levels of back ups in two physical locations. I guess I should have a third…

Along with his friend and colleague, world renowned harpist Roberto Perera, Rubén worked in the design and manufacture of a home-made version of a Polecam.

Truth is that Roberto was the main force throughout the whole process.

Rubén said. They designed and built a 25-foot portable jib that was a bit of a Frankenstein. 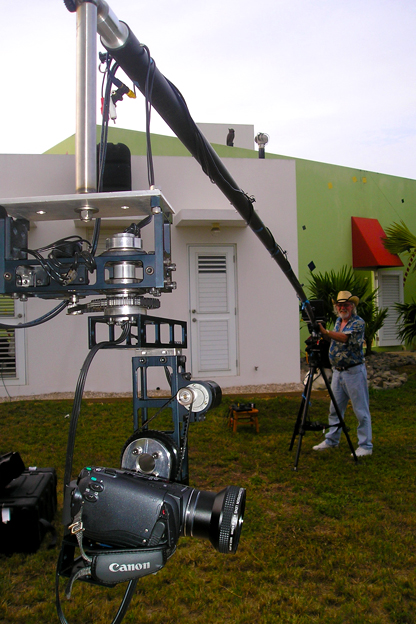 It had custom-made carbon-fiber tubular extensions, a lightweight head by Servocity that tilted and panned with a Futaba remote controller. Due to budget and weight restrictions, they used a Canon HV20 with it, to record HDV images onto mini DV tape at 1920×1080 at 29.97 fps, so this introduced another format and frame rate to the mix. Video was monitored via RCA cables from the camera’s A/V output to a Sony portable DVD player that had a screen at the base of the jib. They only shot 1 day recording to tape as Rubén was able to find a long HDMI cable to run it from the HV20 to the nanoFlash. Rubén and Roberto flew to Puerto Rico with the Palo Cam, as it was dubbed during the recording of a music video of a Miami-based band named Palo! which was illustrated in this 2009 article: DVKitchen has become a must-have video encoding & publishing tool.

The Palo Cam gave us the high angle moving shots that we needed to show the most prominent trait of the house, which is that it has no roof! 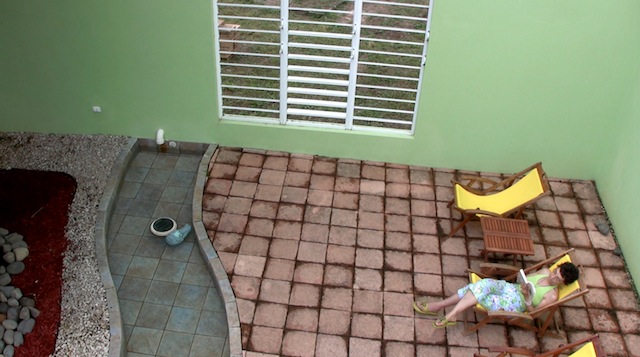 A year later, Rubén sold his JVC GY-HD250 camera via eBay, and bought a Panasonic AG-AF100 camera. He was not so sure about the AVCHD codec, though. At that time, Rubén and I were preparing the production of a 30-second spot in four languages for European distribution, as covered in Panasonic AF100 joins forces with Sony encoder for 25p Euro spot in Miami. In that article, I covered the comparisons Rubén and I had made between the AVCHD (H.264) 4:2:0 relatively low bit rate versus the higher bitrate 4:2:2 recording on the nanoFlash.

After those tests which visually were very revealing, and with new cheaper portable HD recorders coming to the market, I sold the nanoFlash. I was attracted to the AF100 because it allowed me to change lenses, it was a world camera, and it was affordable.

Abruña recalled. By this point Rubén had already made serious inroads into the editing of the documentary. His FCP 7 sequence settings were ProRes422, 1280×720 at 50 fps. With that in mind, the AF100 was ideal because it allowed him to shoot at rates that fit well within his sequence. The progressive recordings were important for Rubén as he wanted to avoid interlaced video, and up to that point he managed to keep all the recordings in a progressive world.

Rubén recalled with some nostalgia.

Up to that point, everything Rubén had shot was progressive until one day about a year ago when the Architect asked him in an impromptu manner to join him in his micro-car garage. The Architect was about to launch the prototype of an electric-solar hybrid car he had been developing for the past three years. Rubén had no gear except a segregated Sony Cyber-shot DSC-WX9 point-and-shoot camera which records in AVCHD 1920×1080 29.97i (previously called 59.94i), and which he normally uses for taking travel photos.

That’s how documentary production is: unpredictable. The Architect was giving me a private show of the new prototype that was to be launched and I knew there was no way that I could get that moment again, so I pulled out my little Sony camera and started recording video with it, which is going to make it to the final version of the movie. It does add interlaced video to the mix, but content is paramount, no pun intended.

Recently, he expanded a short sequence of the documentary because he finally found the right props (miniature furniture), but found himself without a professional camera. Rubén sold his AF100 via eBay several months ago and is still waiting for his Blackmagic Cinema camera which he ordered in June of 2012. So he decided to use his iPhone 4s to record the new sequence. He recorded the sequence at the non-standard frame rate of 30.000 fps, which is how the iPhone’s native camera app records video, and at 1920×1080. He transcoded the H.264 original into ProRes422 from H.264 (leaving the framerate the same as the source) and edited into the sequence on FCP 7. Ironically, Rubén used FCP X to do the transcoding, but continues to edit this project with FCP 7, since the project predates FCP X. 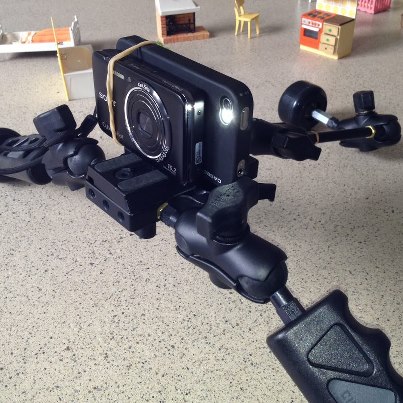 In his usual guerrilla filmmaking style, Rubén shot this new sequence using Cinevate’s Trawly, in a peculiar way because he did not have a tripod adapter for his iPhone. He instead mounted the Sony Cyber-shot camera using a tripod mount and attached the iPhone 4s to it with a rubber band.

I was impressed by the quality of the video of the iPhone 4s, all shot with natural light, even if it is originally a highly compressed H.264 image. I was so impressed by it that I decided to use it for the Indiegogo campaign video, and the results were just amazing, I was stunned by it.

You can see this video here. Rubén intends to reshoot this sequence if he receives his Blackmagic Cinema camera within the next month.

This camera story of La Casa Ausente mirrors the camera technology developments of the past 5 years. This evolution I worked through and experienced in 5 years is equivalent to going from 8 track to 24-bit/96 kHz HD sound, which took decades to happen.

La Casa Ausente is scheduled for release in February of 2013. Currently it is in the last phases of post-production. In part 2 of this series, I will explain the curious route that Rubén took to manage so many different formats, códecs and frame rates to edit this 53-minute green documentary.