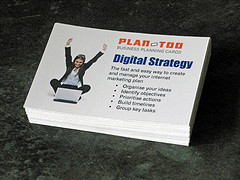 Do you need a digital strategy or digital skills?

Every business today is essentially a digital business. It’s hard to think of anything you can do without being affected by digital technology. This is especially true in the realm of media and marketing.

However, in seeking to compete in the digital arena, many companies make the mistake of focusing their efforts on strategy and neglect skills. The result is usually not only failure, but expensive failure.

Strategy is all to often considered to be solely in the domain of consultants, investment bankers and top management. Invariably, the upshot of all of these high powered people being involved is major acquisitions involving lots of money (how else to justify the time and expense of such important people strategizin’?)

As I wrote earlier in a post about thewinner’s curse, this often leads to disaster. Over the years, major strategic acquisitions like Disney’s purchase ofInfoseek, News Corp’s ofmisguided venture into MySpace and, perhaps most famously,Time Warner’s ill fated merger with AOL have made huge headlines and then resulted in major write-offs.

On a less spectacular level, media companies often launch e-commerce initiatives involving selling real estate, travel and other businesses that they would never enter into in the offline world, but, for some reason, see as perfectly suited to complement their online activities.