Extreme sports videos are a hit on YouTube, but few think about the behind the scenes work that it takes to capture these daring events on film and share them with the world. Devin Graham, aka Devin Super Tramp on YouTube, knows firsthand. To stay one step ahead of extreme sports enthusiasts, he has paddled for hours through waves with camera gear in a dry bag, hiked through jungles, and braved extreme temperatures to capture shots that may last only a few seconds. The result? Millions of viewers, 1.8 million subscribers and plenty of high-profile endorsements. For Graham, living on the edge is an everyday part of life, one he tackles with joy, enthusiasm, and the video tools in Adobe Creative Cloud. 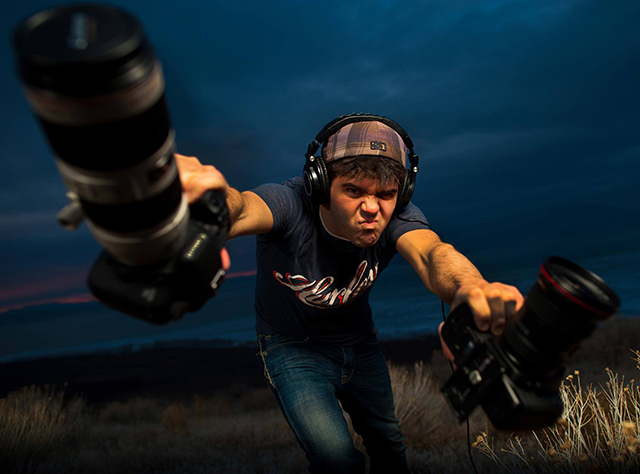 Adobe: Tell us more about your background.
Graham: Since I was a little boy, I always wanted to make movies. I created LEGO movies, music videos with siblings, and snowboarding videos with friends. I bought cheap cameras and ultimately broke them. Making movies always made sense to me. I started editing with Pinnacle Studio software in high school, but quickly switched to Premiere Pro.

After high school I went to Brigham Young University (BYU) for filmmaking and learned Final Cut Pro and Avid. I thought that I wanted to do big Hollywood productions for the entire world to see. During my time at BYU I had the opportunity to go to Hawaii to work on a couple of projects. That’s when I learned about YouTube and realized I could have a bigger voice online, creating content that I wanted to create without a producer or studio dictating what I could and couldn’t do. I started making YouTube videos and right away they went viral. Recognizing the opportunity that was in front of me, I dropped out of film school to pursue a YouTube career.

Adobe: How do you explain the success of your YouTube channel?
Graham: A lot of people think I just go out and have fun, and I do, but it’s also a lot of hard work. I made a video, Fighting for your passion – Inside Look at what I do for a living because I’m asked about it so often. As I say in the video, I want to get the shots that no one else will get, and there’s usually a crazy story that goes along with each one.

As soon as my videos started going viral, advertisers contacted me and wanted to get involved. I’ve recently done work with Ford and Mountain Dew, which has been really fun and I’ve been grateful for the opportunity to work on these projects. A few months ago Universal Studios invited me to fly out and use their backlot for a shoot. Again, I know it sounds glamorous, but there are a lot of other shoots where we’re sleeping in tents, getting up before dawn, and hiking for miles to try to capture a four-second shot.

It’s all worth it, though. I love knowing that when I post a video it goes out to hundreds of thousands of fans. Those are ultimately the people who determine my success. 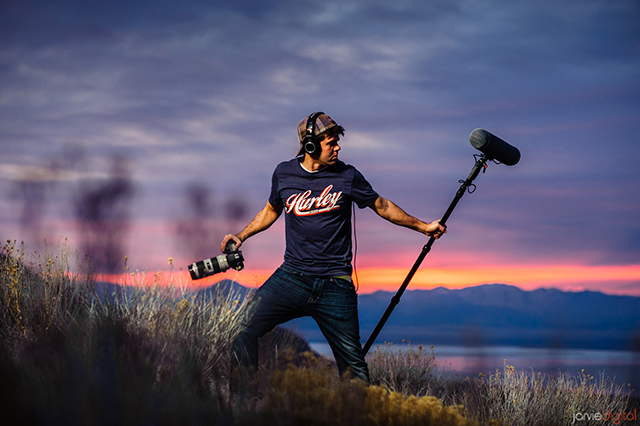 Adobe: Why do you call yourself Devin Super Tramp?
Graham: Super Tramp comes from the book and movie Into the Wild, about Christopher McCandless. He abandons his possessions, gives his entire savings to charity, hitchhikes to Alaska to live in the wilderness, and changes his name to Alexander Super Tramp. It’s a story about how he went out and pursued his dreams, much like I’m doing. In the end, he realizes he should have shared his joy and adventures with the world. I’m taking that next step, learning from his mistakes, and sharing my experiences. It’s been awesome because I’ve gotten email from fans around the world telling me how I’ve touched their lives, which is incredibly meaningful.

Adobe: How do you come up with the ideas for your videos?
Graham: I want to create content that people want to see and I want to do projects that interest me. People love the extreme sports videos, but I’ve also tried to branch out and build my audience in other ways by looking at what’s popular and trendy. For instance, I created the video Assassin's Creed Meets Parkour in Real Life and timed it with the release of the Assassin’s Creed video game. Because it focused on a popular, timely topic it got more than 30 million views. I also look at Facebook and Instagram to see what people like. I saw a friend’s picture on Facebook of a puppy in a package at Christmas that had an amazing number of likes. I decided to do a video called Puppy Christmas that was very successful; it was even showcased on Good Morning America.

Adobe: Tell us more about your workflow and your transition from Final Cut to Adobe Premiere Pro CC.
Graham: I had been using Final Cut Pro for years, because that was the editing software taught at BYU. I knew all the shortcuts and was familiar with Final Cut, but the workflow was painful. I spent so much time converting file formats before I could even start editing, and the multiple resulting files consumed tons of storage. I knew I needed to move back to Premiere Pro, but honestly, I was dreading the switch. When I opened Premiere Pro I realized I could use the same keyboard shortcuts that I did in Final Cut Pro. It took one or two days to get familiar with the software again, and it’s been great ever since.

I shoot on Canon 5D Mark III and Mark II, Canon Cinema 1DC, as well as GoPro Hero3, iPhones, Epic, and Phantom cameras. When I finish shooting I put everything on a hard drive, label it, open Premiere Pro, and start editing on my laptop – it’s that simple. I often edit when I’m on airplanes, in airports, or in hotel rooms and Creative Cloud gives me the flexibility to work from anywhere. I keep my editing process as simple as possible, using Warp Stabilizer to smooth out shots and the Lumetri Deep Color Engine to apply SpeedGrade looks from within Premiere Pro CC. Then Premiere Pro allows me to easily optimize and export files for YouTube.

Adobe: Did you transition to new hardware as well?
Graham: For years, I’ve been an Apple user however I was open to new hardware that could perform faster. Recently, I stepped into an HP Z820 system and found it performs faster than my current MacBook Pro Retina. Additionally, it handles my 4K files without issue which allows me to work with my files in real time, so my workflow is certainly faster. And I need that.

Adobe: What does your use of Adobe Creative Cloud mean to you from a professional standpoint?
Graham: I put out a video every week, and I usually try to stay 10 to 15 videos ahead of schedule. I typically have a lot of footage already shot that is ready to edit. Premiere Pro CC helps me work a lot more efficiently than I could before. I use Photoshop CC to tune up still photos and upload them to Facebook, Twitter, and Instagram for promotional purposes. I also use After Effects CC on occasion for creating VFX, and Adobe Illustrator CC for vector graphics.

Adobe: What do your film school friends think of your success?
Graham: When I decided to go this route my film friends didn’t really think anything would come of it. Since then, about half of them have started their own YouTube channels. BYU also brought me back to teach a semester on social media and how to launch a film career. The biggest lesson I tried to impart was that it’s not easy, that you have to go the extra mile to capture that special shot. For me, that will always be what’s next: I was born to be a filmmaker who gets the shots others won’t have the ambition or drive to get.