I’ve always been a desktop guy, only buying a laptop when I went to college for obvious reasons. At the time I didn’t know a ton about how different programs could use hardware in better or worse ways, so I just went with Alienware because they were the brand I knew as a gamer and I needed something that could hold up to editing, as I was a film major. I actually had to buy two, because the first one literally fell apart at the seams; it was made out of cheap plastic down to the hinges. The second one, luckily, was built like a tank. In any case, once I graduated and moved back to LA to start OWL BOT I built a new desktop, which I much prefer as you can add/change or customize the hardware to fit your needs easily and the price-to-performance ratio doesn’t get out of hand. As time has progressed, however, the need to edit on the go has become more apparent so I’ve become more and more interested to see if my aversion to laptops for post work was warranted. 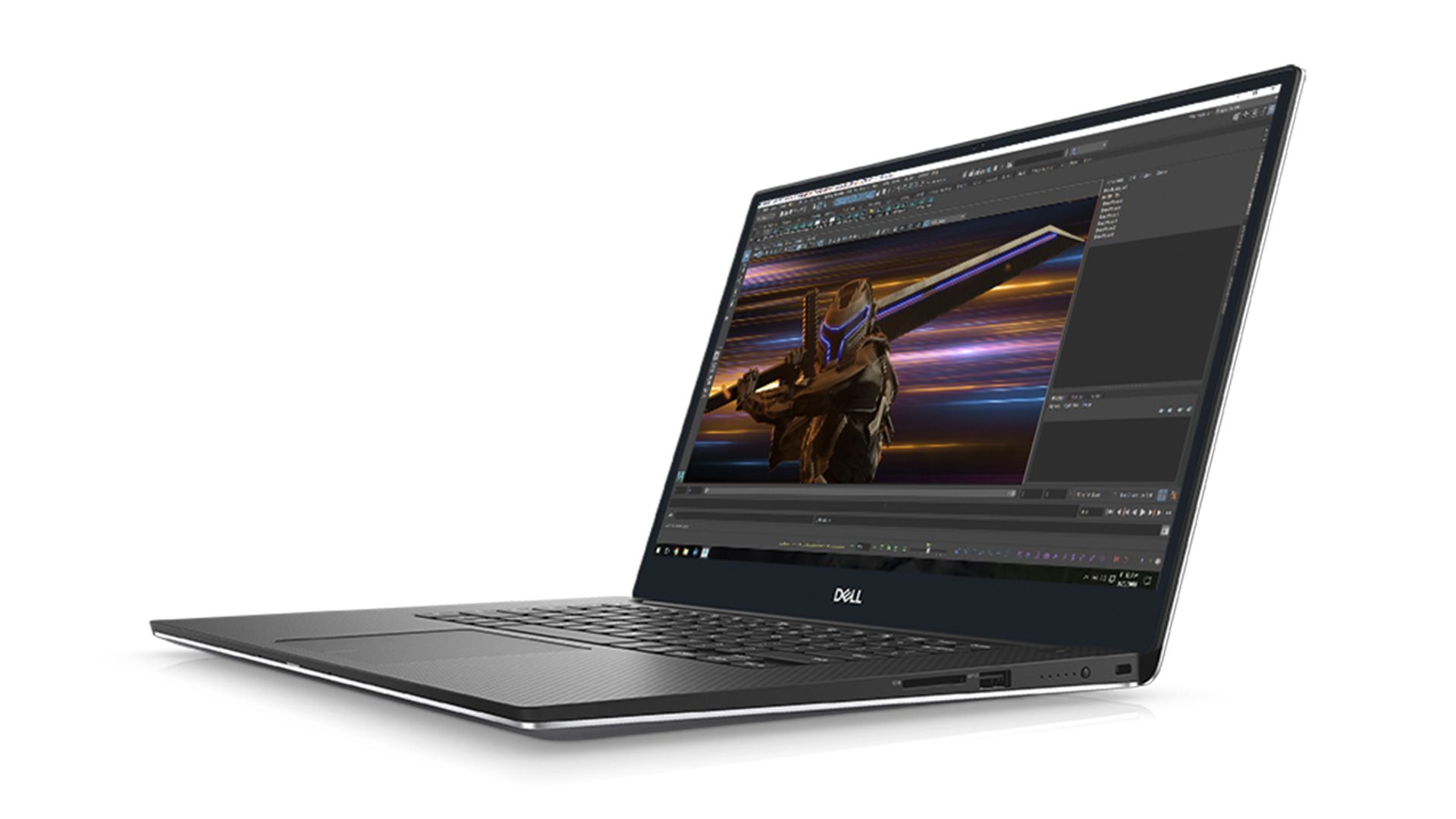 While at Adobe MAX this past November, I took a stroll by the Dell booth to check out some new monitors they had set up but ended up becoming more interested in their mobile workstations. Recently I’ve had more and more need to be able to edit or do DIT-type stuff on the go, but I’ve never really been an Apple guy, so the idea of a sleek Windows option intrigued me and Dell let me take a spin on one of their rigs.

The unit they sent me was the Precision 5540, which included a 2.4 Ghz i9 9980HK (not messing around there), an Nvidia Quadro T2000 (basically a fancier, more stable GTX 1660 Ti), 32GB of RAM and a 512GB NVMe SSD which brought the $1279 base model up to $3197 as-configured and on-sale. The model they showed me at MAX had a couple drives in it, which I was hoping for as it really helps your editing speed when you’ve got your footage, cache, and program/OS all separate, but that’s okay. Luckily I had my GTech SSD handy and had all my footage on that, which didn’t seem to bottleneck me.

To start, the Precision series feel incredibly sturdy, seeming to be housed in their aluminium XPS body but thinner. Typing especially felt lovely, which is often a weak point for laptops, far outperforming the Chromebook I’m currently working on and much better than the paper-thin keys on the Macbooks I’ve been seeing. It also has an SD card reader built-in, which is a blessing as it seems like many manufacturers are abandoning the standard even though tons of cameras/equipment still uses SD (I’m no fan of dongles).

One thing that I don’t necessarily enjoy about laptops is the screen size. I need at least a 27″ to feel comfortable editing for long periods of time, and would prefer to have two monitors so the workspace isn’t so cluttered (I’ve learned I like one of them to be vertical, try it out). Now, the Ultrasharp OLED display on this thing is genuinely pretty, and at 4K you’ve got a decent amount of resolution to design your workspace in, but it was the Thunderbolt 3 port on the side (and a mouse) that let me bridge the size gap in a great way.

In my Samsung Ultrawide review I noted that I couldn’t test the TB3 connection as my computer didn’t have a card for it, but now that I had the Precision laptop I could (I should probably note that Dell makes ultrawides too). I was looking forward to powering the laptop via the single cable but as it’s a workstation it needed a touch more juice than the port on the Samsung was putting out so I opted to run the power cable as well. Another thing I noted in the Samsung review was that, while it was an excellent monitor, I kind of liked having two regular sized ones over one large one, but that’s because I had that option. With a laptop, an ultrawide really comes in to its own.

By using the smaller laptop screen as my data/preview windows I was able to use the main screen for my timelines, which was fantastic. It’s a little awkward to get used to at first but I really liked it. In my opinion, having a big space where you can really dig in to your timeline is much more important than having a big preview monitor, as you don’t really need to see that much detail until you’re in the coloring phase or doing effects or what have you. Having a smaller preview (that you can quickly fullscreen to 15.6” using the tilde key) doesn’t bother me at all.

I went into my editing session assuming it would be cloggy just because “laptop”, but was pleased to find that it held up well against my desktop with very few differences performance-wise, and even outperformed my rig in some cases.

I tested some basic h264 from my C100mkII, which never hung up as expected, but was surprised to see that it could handle 4K Rawlite from the C200 at ½ quality with no hiccups, which can’t be said about my desktop. With lumetri on the clips it’ll hang from time to time but nothing too noticeable or often. I was planning on testing the 5.6K Rawlite out of my C500mkII but had some issues getting the footage off the card before having to send the laptop back so I guess that’s a benchmark for a different unit. It handled 4K Alexa LF footage at full resolution with no issues, but that was also in ProRes.

[Sidenote: if you’re a C500mkII owner and can’t seem to get the included SanDisk reader to read your CFexpress card, you have to hold it in there against the spring mechanism for a few seconds. Not sure why, but that’s the fix. Canon said it’s a batch issue so I assume newer models will have that figured out.]

Editing in Premiere was pretty snappy, potentially aided by Dell’s Precision Tuning software that calibrates the system to a given program, and rendering times were actually very impressive. I tried a fully edited/colored 4K render on my personal system that took about an hour and it only took 15-20 minutes on the 5540. Nice.

Like most systems, effects like Unsharp Mask would slow everything down to a crawl as they’re not GPU accelerated, but the effects that were didn’t seem to affect playback.

On the subject of the GPU, as the T2000 is a workstation card built on the Turing architecture instead of Pascal (such as my GTX 1070) and there’s some reworked engineering magic that has it running at a pretty decent clip. From NotebookCheck.net:

“The Turing generation did not only introduce raytracing for the RTX cards, but also optimized the architecture of the cores and caches. According to Nvidia the CUDA cores offer now a concurrent execution of floating point and integer operations for increased performance in compute-heavy workloads of modern games. Furthermore, the caches were reworked (new unified memory architecture with twice the cache compared to Pascal). This leads to up to 50% more instructions per clock and a 40% more power efficient usage compared to Pascal. In contrary to the faster Quadro RTX cards (e.g. Quadro RTX 3000), the T1000 and T2000 do not feature raytracing and Tensor cores.”

Technically I don’t know what that means, but what I can glean from it is that Turing cards can handle more processes simultaneously, meaning better performance. Even though the T2000 is based on the 1660 Ti (which I’ve read performs similarly to my 1070) the T2000 did seem to handle things either similarly or better than my setup in most cases, so I’ll say that’s an overall improvement. Not to mention the Quadro cards are way more stable. One can also assume that the 8-core i9 9980HK had a hand in that performance boost, seeing as it’s probably the best processor you can put in a laptop at the time of this writing. You can also overclock it from 2.4Ghz up to 5Ghz if you’re into that sort of thing.

In terms of an editing experience, after getting past the general form factor differences and let my bias against laptops subside, I was doing great. I didn’t feel like I was being hampered in any meaningful way and (aside from a random time where playback was great but Premiere itself was choppy) I never hit a snag or crashed. Many people buy gaming laptops for editing purposes but there’s something to be said for a system purpose-built for this kind of work, specifically when it comes to stability. An Alienware laptop will constantly be receiving updates that will keep the most recent games running smoothly but may just mess something up for you in Premiere or Resolve or what have you. The Quadro cards specifically are built and serviced specifically to avoid this, which is where the price difference comes in to play.

Now, not everything can be amazing obviously, and there were a few things that I noticed that were at worst annoying but still present.

First, the screen. It’s a great display but my copy seemed to flicker from time to time and I couldn’t pinpoint why. It also had a dead pixel, but both problems I’m going to assume were because the unit I was sent was for reviewers and it probably went through some tough days before it got to me. Not really an excuse if that’s the case, but it is what it is.

Secondly, when I tried to use headphones I noticed a high-pitched whine synced up with the fan  that would disappear for a moment if I clicked the audio source button on the start bar, but would quickly come back. Not sure what’s going on there either, but running the headphones through the big monitor instead fixed it for me.

With those two small caveats out of the way, I can easily say that if you’re in the market for a Windows-based mobile workstation (and can afford it) the Dell Precision series is really a solid performer. If size is your only concern, I’d maybe say check out a Puget Echo Pro or something similar for nearly the same price, but if you need to be able to pick up and go or edit on the move, this would be a great option as it gives you desktop-like performance in a package that you can build up or strip down depending on your needs. With very little competition in the mobile workstation field, it’s nice to see a larger company like Dell taking it seriously. I’m currently on a two-week trip where I’m filming a lot of events, and while I don’t need to do any edits right now there’s definitely been downtime where I could have used the 5540 to get started on those edits or even gotten ahead of things on other projects which would have been nice. Like I said, I’ve never really had a laptop but once I can spare the cash it might be time to invest.