But one that is doing it the right way

“Defiance” is a new science fiction television series/ massively multiplayer online role-playing game (MMORPG) that will be released on the SyFy cable network channel April 15th. Another television series and video game set in a dystopian future that has earth invaded by aliens and destroyed by an environmental disaster isn’t an original approach. You only have to look to a host of television shows like “Falling Sky”, films like “Independence Day” or video games like “Gears of War”. The originality, and the risk, comes from the creation of a story world that spans both the television series and the online video game in real time.

The means the “Defiance” story created in the television series affects the story created in the video game, they don’t operate as separate entities. Characters from the game can suddenly appear on television, becoming part of a storyline for a few weeks, and then move back into the game world. If you decide to watch the television series and buy the video game you have a chance to become a participant in that narrative.

It sounds like a fascinating concept. As with any new television series/ video game franchise there is always a chance that you haven’t created something that is going to resonate with your audience and the series will fail. This is where the SyFy channel is taking a huge risk. In order to create the entire transmedia creative franchise SyFy has taken 5 years and $150 million to get ready for the premiere. There are a number of good reasons that it took this kind of time and investment to get the project ready. The main reason is that SyFy did it right. The “Defiance” creative property is going to become an example of how to create a large scale transmedia property for other producers. A lot of the lessons learned from previous transmedia productions are evident in the design and delivery of “Defiance”. I’ll cover a few of them in discussing the design of the television series and the video game.

“Defiance” is the first attempt at a seamless world that you can experience passively on your television screen and interact with actively on your gaming console. There have been a lot of spin off games that have come from television and film projects. There have also been attempts to integrate short episodes into a video game, such as “Forward Unto Dawn” that was created last year as the back story for the release of Microsoft’s Halo 4.

“Defiance is something new though and there are a number of challenges in creating its storyworld. These challenges aren’t new and they have been recognized by storytellers who are exploring different ways of creating narrative. As technology has been providing more tools that allow a reader to interact with the narrative the storyteller has to deal with a tension between allowing the viewer control of the story or trying to keep the story coherent.

You can think of it as the difference between a novel with a single story and a choose-your-own-adventure book that allows a reader to experience multiple storylines and endings. A traditional novel has a structured, coherent narrative that moves through a traditional act structure and finishes the same way every time. The author of the novel is in charge of the entire experience.

The diagram below summarizes the contrast between an open story world that is typical in a video game world and the structured, linear story world that is typical in a television series or movie. Usually a creative property will choose either one, in the case of “Defiance” they decided to do them both. The graphic is a bit abstract but it sums up some of the main issues. If you want to have a connected storyworld between your television show and your video game you are going to need to create a much bigger game world. In television you control the path of the viewer. You just have to think about walking through a set, most of the doors would open to a brick wall. You only need to worry about the door that the protagonist needs to walk through. In a video game you need to have a large number of doors so the player believes they have choice and control in the environment. It seems pretty obvious but in order to make this work in the real world “Defiance” needed 5 years and 500 people to create their game world. 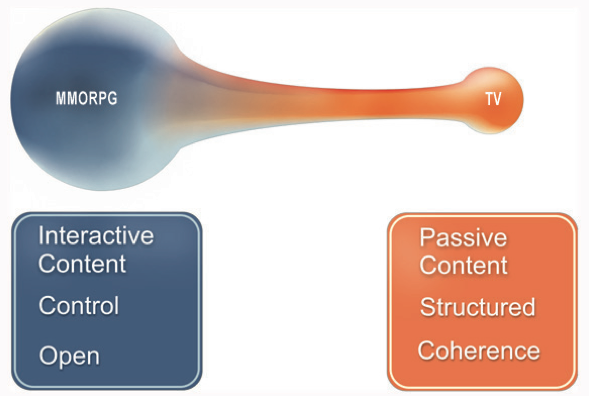 If “Defiance” is a hit and demonstrates the value in the creation of a fully integrated transmedia production there is going to be a lot of interest in creating other transmedia creative properties that follow the same kind of design. The challenge is going to be how to create a rich enough story world on the interactive side that your audience is going to take it seriously and spend their time (and money) there. It can’t take 5 years to produce that world either if a production company wants to get this into a workflow pipeline for next season. There should be a lot of production companies watching “Defiance” as it premieres because if it works they will not only need to design their own transmedia properties, they are going to need to figure out how to get it finished a lot faster. Otherwise “Defiance” is going to spend 5 years dominating the transmedia space and grabbing market share away from other, less interesting creative properties.