For event recording, it’s good to have emergency sealed headphones, and being extremely portable and cheap, earphones fit the bill. Amazon is touting a selection of Stocking Stuffer Headphones Under $10, and when you land there, you’re greeted by “Major Sound with a Minor Price.” If you shop for $10 headphones, what can you expect? Better than that list, certainly. Happily, manufacturers sometimes ship inexpensive products that don’t sound half bad.

Cheap earphones are a boon for the forgetful, since they can be easily tucked away in bags, pants or shirts pockets. And if left behind or misplaced, there’s no fret — it’s not like you lost your $100 HiFiMan RE-400. If you tend to run and gun with a strange 2nd or 3rd camera, and need the scratch audio, extra headphones are handy. They can also serve double-duty listening to music, so decent audio quality is nice if you’re stranded with one pair of headphones.

◊ Cutting to the chase, in December 2014 The Wirecutter switched their top pick to the Brainwavz Delta, and it’s decent sounding $22 earphone, as well as sturdy and nearly tangle-free. Their other more recent pick is available from only one source. Out of the box, the Brainwavz are perhaps not as pleasing as the TCM125 ErgoFit and Panasonic HJE120 ErgoFit, which both seem richer, more detailed, and more balanced. The Brainwavz Delta has far more bass, but it’s somewhat bloated (and fails on “Baby You’re A Rich Man” by The Beatles, which sounds fine on both Ergofits). The Wirecutter‘s choices seem limited in their $40 roundup, so The Headphone List is a necessary adjunct if you really want to mull over the best options. On the other hand, the previous Wirecutter pick (the Panasonic TCM125 ErgoFit)  seems better than The Headphones List pick (the Philips SHE3580), unless you favor a more pronounced V-shaped sound. It’s good to remember that these are still very cheapest items recommended by those websites, even if they are noticeably better than the stock Apple and Samsung often offered in the past. 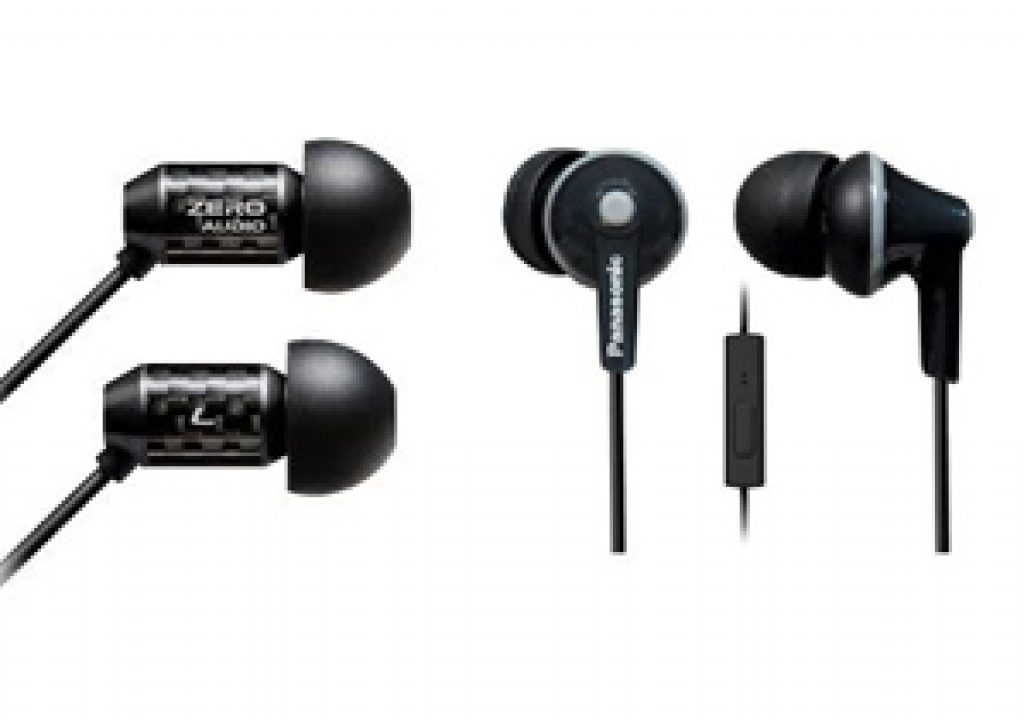 Different types of headphones are suitable for different uses. If you’re unclear about terminology, see Types of Headphones from Video Gear Weekly on Lynda.com. It’s part of a series on headphones for video; see “Related videos” on that websites for the rest of the series. That video is no longer public, so check out Headphone Buyer’s Guide On-Ear vs Over-Ear vs Earbuds from NCIX.com:

◊ For better choices in earphones, see 2016 Earphone Buyer’s Guide by Sound Signature at The Headphone List. For broader coverage in headphones and related goods, check out the InnerFidelity Holiday Gift Guides and the Head-Fi Gift Guide.

Sometimes you’re forced to pick up cheap headphones, and listen to offhand advice. At this price, you’re really searching for balance and clarity, but you can be left with items that you’ll feel bad about even giving away.

In my case, this describes the Philips ActionFit SHQ1000 earbuds that sound far worse than perhaps counterfeit Apple earpods — so why bother. They seem well-built, but because of poor sound they got little use. The Koss KEB 15ig in-ear headphones (with microphone for calls) are a bit better, but still a poor choice because of a muddy bass and muffled highs. In both cases, making sure the fit is snug helps audio response, but they still annoy. 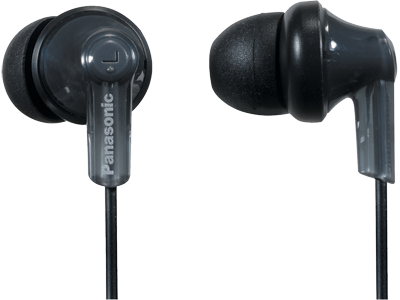 The Verge, CNET, and The Wirecutter liked the Panasonic TCM125 ErgoFit in their roundup reviews. CNET liked the sound of its very similar-looking parent better, the cheaper mic-less Panasonic HJE120 ErgoFit, the #1 headphone on Amazon. Those are brighter than the Panasonic TCM125 ErgoFit, which on a few songs sound a little muted up top and muddy in the bottom registers. Both models are balanced: one is brighter sounding, while the other has a bit more bass and a mic. Both are on the edge of being flimsy, but they work out fine in practice.

◊ After 2 years, The Wirecutter recently switched their top pick to the Brainwavz Delta, and later something else. for a bit more money. The build quality of the Delta seems good, with metal housings, sturdy hard-to-tangle cabling, and a flexible 45-degree mini plug. Better Brainwave models, and others, regularly sell near $40. The Zero Audio Carbo Tenore are my favorite at that price, and though their build quality is variable and fit can be a fiddly experience, they have a better more detailed sound and do not distort the bass. … By summer 2017, KZ ATE and KZ ZS5 earphones emerged as competition for the Carbo Tenore.

The cables on the Panasonic Ergots HJE120 are thin and prone to terrible tangles and inopportune touchscreen interactions. Again, the HJE120 sounds good for $7-10 (if you don’t mind more highs) and fits fine, but the TCM125 ErgoFit often seems richer and fuller if somewhat less clear for $11-15, and you get a mic for phone calls. You could get both models together for less than $20 and check your own head.

Application and digital-to-analog (DAC) conversion has a significant impact on the sound of headphones, even cheap ones! I tried out 5 smartphones (Apple, ASUS, Motorola, Nexus, Samsung) and a dedicated digital audio player (DAP: Fiio X3) and found differences in volume, clarity, and high-low balance. The Apple and Samsung phones were decent performers, though only the DAP could push volume.

The Verge also likes the Panasonic ErgoFit. The version with microphone is the top pick in their The best headphones for under $50. That choice is odd for an under $50 roundup — they’re amazing for $11, and maybe $20, but perhaps they’re not $50 good The much nicer Zero Audio Carbo Tenore are $36 on Amazon Prime. Again, it might be better to avoid the rest of The Verge’s picks, other than the specific Panasonic models and consider instead stuff on The Headphone List’s Earphone Buyer’s Guide by Sound Signature, which has picks by price and sound profile (base heavy, v-shaped, flat). 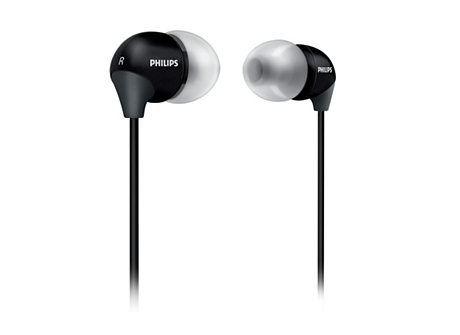 A favorite cheap earphone on The Headphone List’s Earphone Buyer’s Guide by Sound Signature, is the Philips SHE3580 / SHE3590, which |joker| calls “bargain-bin miracles.” They’re good with emphasized highs and lows, but after extra consideration, AEP prefers the more balanced Panasonic TCM125 ErgoFit.

The Philips SHE3580 /90 has a definite v-shaped sound (enhanced highs & lows), with “excellent presence across the frequency spectrum, enhanced bass, and crisp, clean treble, the sound of the Philips is worth much more than what you pay.” Stozz Audio also recommended them in their Top 10 Earphones Under $50. These earphones have decent detail, but do not benefit from enhancement, except perhaps to tone the highs down a touch. They don’t tangle easily, and there’s a miked version if you want one. 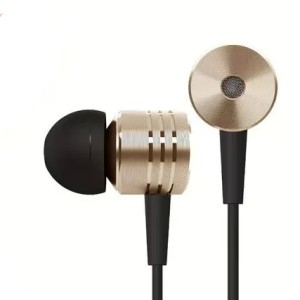 Looking elsewhere (and avoiding another bright-sounding cheapie like the Monoprice 9927), you might pick up a Xiaomi Piston of various flavors from Chinese smartphone maker Xiaomi for around $25-30.

They have a mic, but the player controls are built for Android (they mostly work on an iPhone). The Piston 2 version has a V-shaped sound — enough that the kids seem a little scooped-out. According to The Headphone List, “while higher-end earphones can point out where the audio quality of the Piston 2 falls slightly short, in the age of internet radio this really may be all the performance many users need.” Reducing the highs a notch tamed harshness in this pair on “Talking Backwards” by Real Estate. These well-built phones will cost more to tuck away, but look nicer and have better build quality if you prefer that.

The Piston 2 has been replaced by newer versions, including the fuller Xiaomi Mi Hybrid Earphone, which has nice build quality like other Xiaomi products. I didn’t try any of Xiaomi’s intriguing and well-received 1More line, which ranges from $30-99.

◊ If interested in stepping up to the $50-70 range, see Brief Review: VSonic VSD3S, Ostry KC06 & Havi B3 Pro I, hot items among Head-Fi types. Additional bargains at slightly higher prices include the HiFiMan RE-400 and Fiio EX1. Remember, bargains come and go, on Amazon as well as Massdrop.

Again, by summer 2017, the very inexpensive KZ ATE and the rich KZ ZS5 earphones emerged as competition on the low end at $6-40 (Amazon prices are the highest).

@lachlikesathing posted a good roundup of earphones in this range and higher, which came out after this was written:

Audio testing was done partially at an event shoot and editing talking head video in Premiere. Music tests included “Polythene Pam” by The Beatles (with highs challenging for bad headphones), “Baby You’re a Rich Man” by The Beatles (with lows challenging for cheap headphones), “Everthing In It’s Right Place” by Radiohead (for the distorted feedback), and for midtones and lows, “Live At The Aquarium” by Michael Brook and “Strata” by Steve Roach and Robert Rich.

◊ For an overview of headphone reviews and user forums, see the AEP roundup Headphones: a few resources.