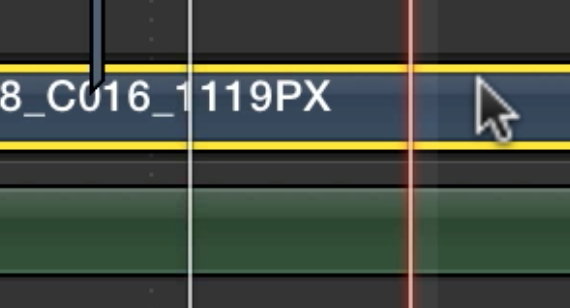 The Final Cut Pro X Skimmer is an awesome thing. But you still have a traditional playhead when working in an FCPX timeline (or Project if you want to use Apple’s term for a timeline). There might be times when you want the playhead to move to a specific frame but just clicking a clip doesn’t move the playhead, it selects the clip.

Now that might not seem entirely useful as so much in FCPX revolves around the Skimmer and not the playhead. But where I find this useful is when I’m wanting to move or shuffle a clip to a specific frame in the timeline. I might find that spot via skimming the Skimmer and when I do find that spot I want to mark it and drag a clip to that frame. I OPTION + click and that parks the playhead there as my reference when I drag a clip. With snapping turned on it’s a quick way to shuffle around a clip. And since FCPX doesn’t use traditional IN and OUT points I find moving the playhead a much more reliable way to mark a spot for a quick move than a Range Selection Start.

Watch the video below and keep an eye on the playhead and how it moves when OPTION is held. When clicking in the gray area (not on a clip) the playhead will jump. But when clicking a clip the playhead does not jump until you hit the OPTION button.

A video posted by @editblog on